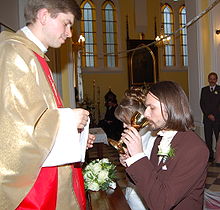 Bridal office with the donation of communion

Mass wine , also known as altar wine , is the wine that is used in the celebration of Holy Mass or Holy Communion .

The production of mass wine takes place in the Roman Catholic Church according to certain regulations laid down by the Church of natural purity and authenticity. These are now fulfilled by the legal regulations and provisions of wine law for quality wines .

According to Christian tradition, Jesus Christ gave bread and wine at the meal with his disciples on the evening before his death as permanent signs of his presence in the community. The roots of this celebration lie in the Jewish seder evening , the beginning of the Passover festival , during which Jews commemorate the exodus from Egypt with four glasses of blessed wine in addition to various dishes .

Until about the middle of the 15th century, only red wine was used as mass wine for the celebration of the Eucharist . In 1478, Pope Sixtus IV approved white wine for the first time. As a rule, the Orthodox churches only use red wine because of its symbolic proximity to the blood of Christ.

The importance of the mass wine transformed into the blood of Christ through transubstantiation in the Catholic Church explains why the Catholic Church has always cultivated, preserved and refined viticulture and winemaking. In addition to being used for the celebration of the Eucharist, wine was also given out as a sacrament on certain days of the church year , for example as St. John's wine on the feast of the Apostle John . With the worldwide spread of Christianity, viticulture also spread . Since wine adulterations occurred in large numbers in the past, the church issued its own regulations on the natural purity and authenticity of the mass wine and controlled the production.

In the past, red wine was mainly used as altar wine, but for practical reasons, white wine has been used for a long time . A little water is added to it during the preparation of the offering .

According to the Catholic understanding, a valid change can only take place with real wine, but not with grape juice or wine that does not comply with the requirements of church law. Canon law prescribes:

“The wine for the celebration of the Eucharist must come from the plant of the vine (cf. Lk 22, 18) and be naturally pure and unmixed, that is, without the addition of foreign substances. Particular care is taken to ensure that the bread and wine intended for the celebration of the Eucharist are kept in perfect condition. That means, it has to be ensured that the wine does not turn into vinegar (...). "

This basic rule has been explained again and again by ordinances on mass wine, most recently in 1976. According to such ordinances, wine must be made from grapes. Added sugar or unauthorized additives are prohibited. In Germany, Austria and Switzerland, these requirements are now met by quality wines under wine law. In addition, the addition of pure alcohol ("spiritus") from wine to the wine is permitted, so sherry or port wine are generally suitable for altar wine. Suppliers of mass wine were sworn in for the quality of their products ("pure, clear wine") . In contrast to earlier times, when these swearing-in ceremonies were large official events, the oath was only made in writing. The local bishop , who also checked and confirmed the wine every five years, decided on the approval of a wine as an altar wine . Buyers of mass wine were obliged to obtain their wine from sworn dealers.

On June 23, 2014, the Permanent Council of the German Bishops' Conference decided on a new Ordinance on Mass Wine, in which it took into account the state jurisprudence that regulates the purity of wine and largely prohibits the addition of foreign substances. Wines that “at least meet the requirements of a quality wine (according to German wine law)” are now permitted for the celebration of the Eucharist. Table wine is not permitted as a mass wine because of its dilution. The approval of individual measuring wine suppliers is not applicable.

Since 1994 it has been permitted in exceptional cases and with the express permission of the bishop to use grape must instead of mass wine . The prerequisite is that the celebrating priest is demonstrably not allowed to drink wine for health reasons. Another prerequisite is that the must has not been changed in its nature. For this reason, only freezing is an option for preservation, because sterilization turns the must into grape juice.

Laypeople are less likely to face this problem, as every believer always receives the body of Christ with the host in full, according to the old teaching that is also valid in other churches . The chalice communion, also by lay people, was also unusual for a long time for practical reasons, and sometimes even forbidden. The reception of the consecrated wine was therefore reserved for the celebrating priest. This was from the 14./15. Century the subject of heated controversy between the Catholic Church and the reformers. Since the Second Vatican Council , cup communion has not only been allowed again for all Catholics present, but also expressly recommended on certain days. The rather rare occurrence is due to the practicality. Special regulations apply to the implementation of the Chalice Communion.

In the Protestant churches , grape juice is used in numerous congregations out of consideration for alcoholic people .

In the independent Evangelical Lutheran Church , episcopal circulars regulate that only wine may be used for the celebration of the sacraments. The only option is whether red wine or white wine is used. Grape juice is categorically rejected for theological reasons, as there is no longer any certainty of proceeding according to the institution of Christ. Communion under a figure is made possible for alcoholics. Christ's body is presented to them through the host. According to “confessional” faith, the consecration by the pastor brings about the sacramental unity of bread and body of Christ on the one hand and wine and blood of Christ on the other, so that the communicant in, with and under the bread and wine of Christ's true body and blood receives his mouth for the forgiveness of sins.