The title of this article is ambiguous. Further meanings are listed under Haikou (disambiguation) .

Location of Haikou in Hainan 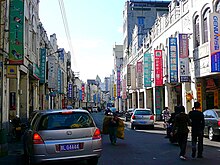 Haikou - formerly also written Hoihow - ( Chinese  海口 市 , Pinyin Hǎikǒu shì ) is a district-free city in the north of the Hainan Province in the People's Republic of China and is also its capital and economic center. The administrative area of ​​the city has an area of ​​2,305 km² and at the end of 2004 about 1.71 million inhabitants (resident population, of which with main residence: 1.43 million). The city is located on the largest island of Hainan Dao in the multi- island Hainan Province.

At the county level, Haikou is made up of four boroughs . These are:

Ethnic breakdown of the population of Haikou (2000)

Haikou has developed into a modern industrial city in recent years, attracting many people from other Chinese provinces. Old China can only be seen in the old town, the rest of the inner city area is dominated by high-rise buildings.

The city's history goes back to the Han Dynasty more than 2000 years ago. In the Tang Dynasty and the Song Dynasty , Haikou was the main link between Hainan and the mainland. In 1988 the city was declared the capital of Hainan. As a result, Haikou has developed from a small border town to a modern city.

The Ironman China has been held here every year in March since 2008 - a triathlon competition over the long distance (3.86 km swimming, 180.2 km cycling and 42.195 km running). The World Open snooker tournament , a world ranking tournament, has been held here since 2012.

Haikou is in the tropical zone . There is an oceanic tropical monsoon climate . The average temperature in January is 17.2 ° C and in July 28.4 ° C.