This article deals with the Kronsberg survey in the southeast of Hanover; for places called Kronsberg see Kronsberg (disambiguation) .

The Kronsberg is a six-kilometer-long ridge on the south-eastern outskirts of Hanover between the Hanover exhibition grounds with the Hanover Expo Park and the Bockmerholz . The Kronsberg towers over the adjacent areas by up to 30 meters. The highest point of the Kronsberg is the viewing hill with a height of 118  m above sea level. NN and is therefore only four meters lower than the artificial north mountain on the site of the Hanover-Lahe landfill in the Lahe district . The Kronsberg rises above the average height of Hanover by 63 meters. It is the highest natural elevation in the city and consists mainly of limestone marl .

The elevation of the Kronsberg covers about 2,000 hectares . Originally the mountain was 106  m above sea level. NN . Due to the artificial, twelve-meter-high viewing hill on the original summit, the height is 118  m above sea level. NN . On the southern shoulder a second hill was heaped up, which is 107.3  m above sea level. NN reached. It is located about 2.3 km south-southwest of the summit. The lookout points allow a wide view of Hanover and the surrounding mountain ranges, such as the Deister . The viewing hill was built in the late 1990s and also serves as a design element. Their summit areas are planted with trees on the edge. Their soil consists of marl limestone that was excavated during the construction work on Kronsberg. The slopes of the oval shaped hills are unplanted and are used by warmth and lime-loving plants to settle. At foot height, the hills are about 80 meters wide and, in an east-west direction, about 250 and 200 meters (south hill) long. Their summit surfaces are also oval and have about a fifth of the dimensions mentioned.

From the summit along the ridge to the north-northeast, the ridge gradually loses height, after only half a kilometer it is lower than 101  m above sea level. NN . The northern branch of the Kronsberg ends at the district road in the Misburg district . There and to the west, the area is widespread below 60  m above sea level. NN . A few kilometers north to east of the northern end of the foothills there are a few minor elevations , especially near Ahlten . On the edge of the foothills, south of Misburg, lies the Anderten district . The Mittelland Canal was dug up to about twenty meters deep into the foothills in the area of ​​its western position, the underwater of the Anderten lock .

South-southwest of the summit, over a distance of more than one and a half kilometers, the Kronsberg remains over 103  m above sea level. NN . Here, about three hundred meters from the summit, the Wülferoder Straße and Landesstraße 388 cross the ridge and cross the Green Ring. The Green Ring is a cycling and hiking trail around Hanover. In the south, the Kronsberg is a little more flat, less characteristic than a ridge. Three wind turbines work here , including the E-66 wind turbine Südkronsberg . The Kronsberg ends here bluntly with a southern slope to a lowland near Grasdorf and Rethen , which flows into the Leinen lowland . On a gently sloping flat shoulder of the Kronsberg on the southern western slope you are at about 80  m above sea level. NN a branch of Finanz Informatik and the head office of LBS Nord, which were also created in the course of the Expo development. There has been a development and training center for the IT company IBM there since the late 1980s . The Bemeroder Rathausplatz is still on the continuation of this spur. To the west of Bemerode and the Kronsberg, in Laatzen and in the Hanoverian district of Döhren-Wülfel , the terrain falls to around 55  m above sea level. NN in the linen lowlands.

The area “between the outskirts of Bemerode and the trade fair and EXPO site in the west, the B 65 in the north, the A 37 in the south and the Mittelland Canal and the city limits in the east [...] [became in 2001] the Protected landscape area declared ”.

Johann Franz Lüders :
The review at Bemerode , 1738, detail. The Kurhannoversche Dragoon Regiment von Wendt in front of King Georg II and Prince Wilhelm August , on the occasion of the great army show of 1735 on Kronsberg

Originally the mountain area consisted of forest, which was probably made up of hornbeams and oaks , like the nearby, former hut forests of Gaim and Bockmerholz . In medieval clearing of forests, the -rode -Ortsname the nearby Wülferode out.

When exhibition facilities for Expo 2000 were built on the south-western slope of the Kronsberg , archaeological investigations of the building site took place between 1996 and 1999, as it was known that the deserted medieval settlement of Eddingerode was located there. The excavations led to the discovery of the remains of 43 buildings, 20 stores and four mine houses .

As early as 1735, the regiments of the Braunschweig-Lüneburg army gathered for a large army show at Kronsberg, the so-called Bemerode Revue . During the time of the Kingdom of Hanover (1814–1866), the Hanoverian army used the area for military maneuvers . After the annexation of the kingdom by Prussia in 1866, this tradition was continued by the X Army Corps stationed in Hanover . In the years 1874, 1881, 1889 and 1907 the imperial parades took place here as part of the imperial maneuvers. In the last parade in 1907, 46,000 soldiers took part in the presence of Kaiser Wilhelm II .

Maneuvers of the 10th Army Corps on Kronsberg.
Drawing by Carl Grote as a woodcut in: Die Gartenlaube , 1874 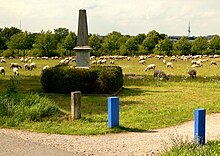 The "parade stone" in memory of the imperial maneuvers on the Kronsberg, here with the blue path markings of the Green Ring

To commemorate the imperial visits in 1889, a memorial stone in the form of an obelisk was placed on a base. According to an inscription, this so-called parade stone was built by patriots of the area near the Bemeroder post mill, which was still in existence at the time . In addition to the memorial stone, parts of the residential and farm buildings that belonged to the mill at that time have been preserved on today's Wasseler Straße. They were already used as an excursion restaurant at the beginning of the 20th century and currently house a hotel and restaurant.

Between 1904 and 1914, the heath poet Hermann Löns , who lives in Hanover, stayed more often in Müllingen , from where he hiked the Kronsberg and the Bockmerholz to observe nature.

In the 1970s there were plans for residential development on the Kronsberg to meet the demand for living space, but these were not implemented.

Alley of trees and meadows on the Kronsberg

Until the world exhibition Expo 2000 , the Kronsberg was a predominantly bare landscape that was cultivated as arable land. With a view to the world exhibition, whose exhibition grounds reached the foot of the elevation, the large-scale mountain area was redesigned by the Swiss landscape architect Dieter Kienast at the end of the 1990s . The planning became a decentralized expo project, the goals of which were the ecological optimization of the landscape area and the creation of ecological residential development. The west side facing the city has since been characterized by the expo settlement in the Bemerode district , which was built in 1998 and extends up the western slope. The Kronsberg Evangelical Church Center is located in the settlement . Large parts of the undeveloped Kronsberg became natural compensatory areas with grass and bush-covered common areas as meadows and pastures, avenues of trees and extensive afforestation on the ridge. With a narrow network of paths, the mountain area also serves as a park-like recreational area. This concept also included environmentally friendly agriculture on the Kronsberg and regional marketing of their products, for which a model village of the Herrmannsdorfer Landwerkstätten was built at the foot of the mountain . However, it filed for bankruptcy in 2004 , and the agricultural facilities have continued to be operated as Kronsberghof since then . A drug clinic was set up in the residential buildings.

A summit cross was erected on the Kronsberg for the Expo , which was initially damaged in 2011 and later sawed off.

The Kronsberg life tower has been located here since 2010 .

From 2019 there will be extensive development on the southern western slope. In this residential area, around 3000 residential units for up to 9000 people as well as another primary school and another large shopping center are to be built.