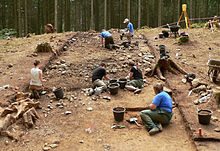 Excavation cut at the Harzhorn event

Excavation of a Copper Age skeleton near Orlivka , Ukraine

In the German-speaking world, an excavation or excavation is understood to mean the archaeological or paleontological uncovering of a finding concealed by the ground or by soil or stone deposition , in which this process is documented with scientific reliability. Ultimately, it is a controlled destruction of the findings. The size of the excavation area depends on the findings themselves, the resources available and the acute need. The soil is removed in layers .

Heinrich Schliemann is considered a pioneer of modern research excavation and field archeology .

As findings while all visible structures (walls, waste pits, trenches, be post holes , layers), wherein in principle to also refer to the excavation not immediately visible structures as findings (for example, Fund concentrations pattern of Fund distribution, heavy metal contamination of the soil, phosphate content of the soil ). Finding nothing archaeologically relevant counts as a negative finding .

There are the following types of excavations:

Almost all excavations are based on the stratigraphy of the findings. It is the sequence of more or less horizontal strata that can be determined in a vertical layer profile . As the lower limit of an excavation, ideally research excavations attempt to reach the natural layers of the earth that have arisen without human intervention or the natural rock. In emergency excavations, at least the depth should be excavated that is also reached by the construction project itself.

To distinguish them from scientific excavations are illegal excavations , which left in its focus on special finds in the findings status devastating damage - apart from legal and moral aspects. 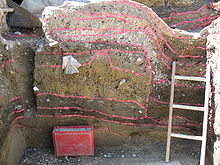 In principle, two different excavation techniques are distinguished in archeology (with many variants in the layout of the cuts and the documentation):

A distinction is made according to the horizontal characteristics:

Excavations that include a particularly large number of layers at one point are referred to as deep cuts. Special safety regulations apply to them due to the risk of slipping. A distinction is also made between an excavation and a prospecting. The latter is a very small excavation that only concerns sections of an object to be treated, in which the first fundamental questions are to be clarified.

A plan excavation is an excavation according to artificial layers (chosen arbitrarily by excavators). Here be Plana (latin. Planum "level"), or taps of regular starch removed independently of the course of the individual layers and culture is measured on these flat surfaces, the findings. The digging is done in horizontal cuts of arbitrarily defined thickness (e.g. 5 cm). The finds are assigned via individual measurements or to the excavations. The creation of profiles is of central importance.

Profile block in the Roman villa in Bad Neuenahr-Ahrweiler

A stratigraphic excavation or stratified excavation is an excavation according to evident (naturally given) strata. Every single authentic cultural layer is minutely exposed. The thickness of the layer does not matter, it is at best a technical problem. In this case, finding by finding is recorded starting with the most recent finding. This does not result in any level excavation areas, but the allocation of the finds to the findings is clear.

The Harris matrix is also based on this excavation technique .

With the German excavation method or area excavation, the individual findings are marked on the subgrade and then excavated. The English excavation or Wheeler-Kenyon method, on the other hand, divides the subgrade into regular squares and is therefore also called the quadrant method. These squares are then excavated, with only narrow webs, so-called control webs, remaining because the course of the strata can be checked in them. The advantage of the English type of excavation is the exactness, the disadvantage is the immense amount of work. The term "English excavation" is misleading and has historical reasons, since in British archeology today predominantly surface excavations are carried out.

Course of an excavation

Preparation of the area

After the excavation area has been determined, the first step is to remove the plow layer with the help of an excavator . A “plow layer ” (in the actual sense of the removal of the topsoil ) can at best be spoken of in undeveloped areas. In the context of medieval city core archeology, the plow layer can consist of meter-thick packs of World War II rubble.

The resulting rectangular pit, the initial depth of which depends on the degree of destruction of the surface cover layer, is called an excavation cut . Each cut is given a consecutive number and is subordinated to an editor, usually an experienced excavation worker or a budding excavation technician, who keeps his own documentation folder. First, the cut edges are then cut off with a spade in order to obtain profiles and the surface itself is roughly smoothed with a shovel in order to obtain an initial subgrade. In the fine plaster , the entire area of ​​the cut is then freed from the last remains of the plow layer using archaeological trowels.

The first findings can then already be discernible on the soil exposed in this way, as they stand out in color from the surrounding soil. Before these are marked, however, a network of coordinates is first laid over the area with the help of an electronic tachymeter (total station), which is based on the geographical longitude and latitude. The findings can then be marked and the area photographed. Theodolites have now moved more into the background during excavations in Germany. With the Gauß-Krüger coordinate system , an accurate location is possible. As the latest technological advance, measuring devices based on the American GPS system are also permitted in some German federal states.

Since there are different procedures and guidelines for working on excavation areas in Germany depending on the federal state, the outlines of the section are sometimes drawn on a scale of 1: 100. A partial sheet system is entered in this drawing. The part sheets themselves represent the area on a scale of 1:20, with special findings also on a scale of 1:10. In order to be able to understand the height differences later, the area is leveled and the level points are entered on the part sheets. In Bavaria, a complete section is usually not drawn in outlines. Here the archaeologists record the individual findings on the surface by means of finding sheets. On these pre-printed findings sheets, which meet the requirements of the Bavarian State Office for the Preservation of Monuments, there is a description and preliminary interpretation as well as a sketch of the finding. Important findings - for example graves - are then reproduced in detail on the subgrade on a 1:10 scale with colored pencils. Only in the case of city core excavations are large areas drawn in the plan. In Bavaria, on the other hand, pits or post settlements are only drawn in the profile sections, usually on a scale of 1:20. In addition to the name of the measure assigned by the authorities, the parcel number and other information, the leveling and metric coordinates are also entered on the drawings.

Processing of findings and documentation 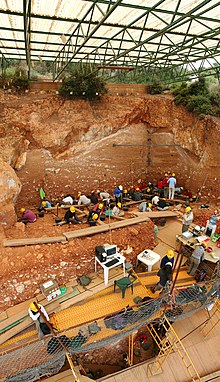 Excavations at a camp of Homo heidelbergensis in Atapuerca

Exemplary procedure for processing a finding: The findings marked on the first exposed subgrade are initially given consecutive numbers and are usually drawn on a scale of 1:20. Each individual finding is then leveled and described as follows: shape, orientation, size, position, composition and presumed function. This is the initial address. If another finding is discovered within a finding or if several findings are adjacent to one another, it is a complex of findings that is given its own number and initial address.

The findings are then cut to obtain a profile. First, a profile cord is stretched over the finding, which divides it into two halves. One half is now removed with the trowel except for a new layer. If the new layer is an embedded layer, an intermediate subgrade is drawn, the layer is leveled again and then removed down to the one below. The profile is cut perpendicularly along the profile cord and photographed. Before the profile is drawn on a scale of 1:10, the profile cord must be stretched and leveled horizontally. In this way, the course of the profile can later be shown exactly on the drawing.

After this is done, the second half of the finding is excavated and the entire finding, the so-called negative subgrade, is photographed. This negative subgrade will now be leveled again and briefly described. Finally, as in the initial approach, the entire findings are described again using the same criteria and the actual function is determined ( final address ). The respective planum also receives a consecutive number and is documented in writing, photographically and graphically.

Normal finds (ceramic shards, burnt clay, bones, charcoal) are put in bags, stating the finding number. Special finds, on the other hand, such as coins, weapons, etc. are measured and leveled individually. Larger findings, such as walls, ovens and the like, are photographed, leveled and documented in a separate drawing on a 1:10 scale.

Then the entire area is removed down to the second subgrade to be created underneath and the work process starts from the beginning. The data determined in this way are processed and published as an excavation report.