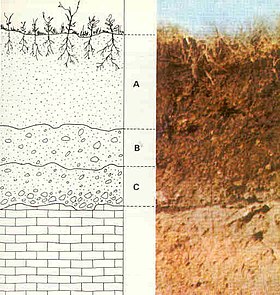 Photo and schematic representation of a soil profile using the example of a Terra Rossa . The top soil layer that appears darkest is the top soil or topsoil, marked in the scheme as the A horizon.

The topsoil , also known as mother earth , topsoil and among farmers as arable topsoil , is the topmost and most fertile horizon of the soil . In addition to the main mineral components ( fine sand , silt and clay ), it contains, in contrast to deeper soil horizons, a high proportion of nutrients (especially nitrogen ) and organic matter ( humus 1 ) as well as a large amount of soil organisms ( edaphon ). Aerobic (oxygen-loving) bacteria usually live in the topsoil, whereas anaerobic bacteria can also occur in the lower horizons, depending on the water saturation and air supply. In soil science , this uppermost horizon, which is around 20 to 30 cm thick in the warm temperate latitudes , corresponds to the so-called A horizon. In the case of arable soils, it is marked with the abbreviation Ap (p for plow).

In addition to air and water, soils in general and topsoil in particular are an important basis of life for plants, animals and humans and therefore a valuable, finite resource. However, topsoil is endangered by erosion , sealing , entry of toxins and other overexploitation . From this we derive our own soil ethic, which aims to protect and preserve this topsoil. In Germany, for example, topsoil is legally protected by, among other things, Section 202 BauGB ( Building Code ), entitled "Protection of topsoil". It must not be disposed of or deposited together with the sub-floor during construction work .

In the topsoil, physical and chemical processes are used to filter, clean and retain precipitates and pollutants, water is released again after a delay ( retention effect ) and nutrients for the vegetation are broken down and converted. So the topsoil has an important function in terms of water balance and environmental protection, especially in water protection areas .

Since the topsoil is often not stable for buildings and paved roads, it must be removed before construction work begins. Cleared topsoil can rot due to its high content of organic matter if it is stored in too large an accumulation, and must therefore be stored properly until it is used again (if necessary in another place). For this purpose, soil exchange exchanges have been set up in many districts , which are intended to facilitate the reuse of topsoil.

The earth is also described as the basis of life in the cultural history of mankind. In many historical and contemporary cultures there was or is a mother earth myth with the earth as a symbol for fertility and life, which, as in the case of the Pachamama of the Andes , can even be the center of the worldview.

1 In southern Germany the word "humus" is also used synonymously for topsoil.