The Gauß-Krüger coordinate system is a Cartesian coordinate system that enables sufficiently small areas of the earth to be located conformally ( angularly ) with metric coordinates (easting and northing) . It is a true-angle transverse cylinder image (transverse Mercator projection ).

The system was developed by Carl Friedrich Gauß , published by Johann Heinrich Louis Krüger and is mainly used in German-speaking countries. From 1935 to 2010 the Gauss-Krueger system was used throughout Germany as the basis for the representation of the triangulation results, later the Netherlands , Sweden and South Africa followed .

Much earlier, however, the military used the Gaussian triangular network . The Osnabrück region was from 1834 to 1847, the Emsland 1853-1860 and East Friesland in 1866 included , in the same year took over the Prussian General Staff trigonometric, topographic and cartographic works. Many official topographic maps , especially large and medium-sized scales , are based on the Gauß-Krüger coordinate system. 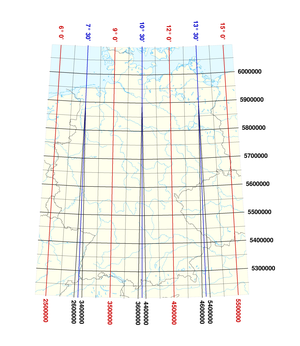 A grid in the Gauß-Krüger coordinate system with a line spacing of 50 km is placed over a map of Germany.
The red lines mark the central meridians, the blue lines the edges of the meridian strips.

Each meridian strip is given a code number (only with the Gauß-Krüger meridian strip system with 3 ° strips). This is derived from the number of degrees east of the central meridian (0 °, 3 °, 6 °, ...):

The meridian stripe is mapped onto a cylinder surface with the correct angle (conformal), the axis of which lies in the equatorial plane and the radius of which is equal to the meridian radius of curvature of the reference ellipsoid . The cylinder touches the figure of the earth along the central meridian.

According to a resolution of the Working Group of Surveying Administrations of the Federal Republic of Germany  (AdV) in 1966, each meridian strip has an extension of 1 ° 40 'on both sides and not half the width of 1 ° 30'. As a result, two adjacent strips overlap with a strip 20  minutes in length (on average about 23 km) wide. In this overlap zone, the coordinates in the respective meridian strip and in the adjacent meridian strip are specified for each point. So geodetic measurements and calculations are possible to a certain extent beyond the edge of the strip without changing the strip. 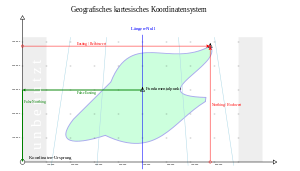 One coordinate ( easting ) counts from the origin positive to the east, the other ( high value ) counts positively to the grid north . The letter Y is often used for easting and X is used for northing. When naming coordinates, they are usually given in the order easting and northing . Right and north values ​​are given in the SI unit of the meter . As in any Cartesian coordinate system, the right and north values ​​are read parallel to the axes and not to the arcuate lines of the longitude and latitude .

The origin of the coordinate system is:

In order to avoid negative easting values, a constant value is added to the easting value in the Gauß-Krüger meridian stripe system ( false easting ).

In the Austrian Federal Network  (BMN) - depending on the reference meridian - the following values ​​are added:

The Paradeplatz in Mannheim has the following coordinates

The UTM coordinates - and the Gauss-meridian strip system use up to a scale factor , the same imaging equations (transverse compliant cylinder figure) to Verebnung the surface of the earth ellipsoid.

The main difference is that

With this conformal type of mapping, the line distortions towards the outer edge of the stripes increase significantly with increasing stripe width :

To compensate for the greater length and angle distortions at the zone edges caused by the wider meridian strips, a scale factor of 0.9996 is applied to the UTM system. The central meridian is shown shortened by the factor 0.9996 = 40 cm / km. With increasing distance from the central meridian to the east or to the west, this shortening decreases due to the growing image distortion within the zone; at a distance of about 180 km from the central meridian, the length distortion disappears.
In the case of the Gauß-Krüger coordinates, due to the only 3 ° wide stripe, such a scale factor is dispensed with, since the maximum distortions are still within the practically relevant accuracies or, for very precise requirements, with simple mathematical means (breaking off the necessary series expansion of the formulas after the second summand ) can be taken into account.

The UTM system also differs from the Gauß-Krüger system in terms of the naming of the strips and the coordinates. Since the UTM system was originally introduced as a reporting system for the American military , the designation here is plan-quadrant . The coordinate values ​​should be designated as East and North or East and North values to distinguish them from those of the Gauß-Krüger system (right and north).

In German cartography and geodesy , the Bessel ellipsoid (in parts also the Krassowski ellipsoid) is used as the reference ellipsoid.

The spatial definition of the Bessel ellipsoid in relation to the earth's body - the positioning of the ellipsoid in the center of mass of the earth and its orientation to the earth's axis of rotation - was carried out for what was then Prussia with the help of the central point Rauenberg in Berlin. After its destruction, the central point of the network was mathematically transferred to the Helmert Tower in Potsdam , which is why the geodetic date of this system is often incorrectly referred to as the Potsdam date . This Rauenberg date is also the basis of the German Main Triangle Network (DHDN) .

In the GDR , the Krassowski ellipsoid was used as the basis. In the new federal states it was still used on a transitional basis, for example in Mecklenburg-Western Pomerania until around 2007 and in Saxony until 2014. In contrast, the state survey offices have switched from Gauß-Krüger to UTM coordinates since the 1990s . The aim of the change was to create a uniform geodetic reference system in the united Germany.

As an internationally standardized name are by the  OGC , the  EPSG ( European Petroleum Survey Group codes used). The following designations apply to the meridian strips used in Germany or in the area of ​​the former German Empire :

There are currently a number of spatial data services with incorrect (31492–31495) or old identifiers (31462–31465). The systems with the old and new ID differ in the order of the coordinate values:

In Austria , the date Austria is used for the Austrian Federal Registration Network , which is based on a shifted Bessel ellipsoid. The UTM coordinate system is increasingly being used by the authorities and other organizations, while the armed forces , based on NATO, also use the MGRS system.

The topographic maps of Finland published between 1970 and 2005 (or nautical maps produced up to 2003 ) use the nationally unique YKJ coordinate system (yhtenäiskoordinaattijärjestelmä) .

The system indicates the location with an accuracy of one meter using two seven-digit numbers ( easting and northing ). It refers to the 27 eastern longitude with a Ostverschiebung (false easting) of 3,500,000 meters and a scale factor of 1. As a geodetic datum is reference ellipsoid from 1924 to Hayford used.

The YKJ coordinate system is currently being replaced by EUREF-FIN, the national implementation of ETRS89 .