L ' Alpe d'Huez [ lalpə dyˈɛz ] is a winter sports resort in the French Alps , which is located in the area of ​​the municipality of Huez . It is internationally known on the one hand as a mountain arrival at the Tour de France and on the other hand as one of the most important archaeological excavation sites of medieval silver mining in Europe.

Panorama of the 21 serpentines to L'Alpe d'Huez

The place is in the Isère department . In the vicinity, the foothills of the Oisans and Grandes Rousses massifs merge. Alongside Val-d'Isère , Tignes , Courchevel , La Plagne and Les Arcs , L'Alpe d'Huez is one of the major winter sports resorts in the French Northern Alps. It belongs to the second generation of winter sports centers, which developed more or less organically around a small, high mountain village. In the third generation, large tourism companies have set “ski-total-locations” like Courchevel with huge apartment blocks in a hitherto almost untouched landscape, which has resulted in environmental problems .

In the 12./13. In the 19th century, the town of Brandes en Oisans was 300 meters away and was home to productive silver mining. This is the target of an excavation that is ongoing to this day under the direction of archaeologist Marie-Christine Bailly-Maître .

With the hosting of the bobsleigh competitions of the 1968 Winter Olympics , L'Alpe d'Huez experienced an enormous upswing, while Ornon, on the opposite side of the valley, has retained its character as an original mountain village and cozy winter sports resort to this day. In addition to the Tour de France , the winter sports resort has also made a name for itself with a second summer event since the EDF Alpe d'Huez triathlon was held.

The climb to L'Alpe d'Huez

L'Alpe d'Huez owes its importance to cycling to the ascent from Le Bourg-d'Oisans . With its 21 hairpin bends, it is one of the most famous climbs of the Tour de France, alongside the Col du Galibier , the Col du Tourmalet and the Mont Ventoux . In 1952 the Tour de France climbed the mountain for the first time in the retort settlement, which was won by the Italian "Campionissimo" Fausto Coppi . It was not until 24 years later - in 1976 - that the Tour visited L'Alpe d'Huez a second time. Since then, however, the legendary 21 bends, numbered backwards, have regularly been part of the program of the world's most important cycle tour.

Because of the difficulty of the ascent and the fact that, with a few exceptions, the greats of cycling have immortalized themselves with their victories, a stage win in L'Alpe d'Huez is of particular importance for both the riders and the spectators. That is why the reports often refer to the “ myth of L'Alpe d'Huez” or the “mythical mountain”. The names of the stage winners are listed in the 21 turns, starting with the first winner in the 21st turn. Since there have been more winners than sweeps since Lance Armstrong's victory in 2001, the signs have started to be labeled twice. Turn 21 is now dedicated to Fausto Coppi and Lance Armstrong.

See also : List of the stages of the Tour de France 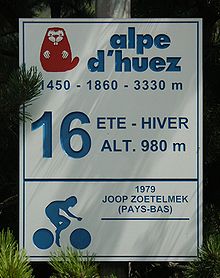 The bends are numbered and each dedicated to a stage winner

Since 1994 the time for the final ascent to L'Alpe d'Huez has been officially stopped. Earlier times are therefore not available or are only of an informal nature. The "mountain record" is held by Marco Pantani , who in 1997 needed 37:35 minutes for the last 14.5 km. The times mentioned in different sources sometimes differ greatly and are often not comparable, since the time measurements are based on different distances. From 1994 to 1997 the ascent was measured from the last intersection before the ascent (14.5 km from the destination). Since 1999, the time has been measured from the curve behind which the climb begins immediately (13.8 km before the finish).

Lance Armstrong could not beat Marco Pantani's fastest time despite the short stage length. He drove the increase of 13.8 kilometers in the fourth fastest measured time to date (as of 2017), 37:36 minutes, while Pantani's best times were 36:40, 36:53 and 37:15 minutes. The audience of almost 1 million people led to chaotic conditions, especially in the lower half of the mountain. Because there were no barriers here, the fans stood so close to the track that the drivers drove as if against a human wall that only opened at the last moment.

The times of Pantani were all achieved at the end of a long and difficult mountain stage. Armstrong, however, did not have such a previous burden in 2004. It should be noted, however, that other riders like Jan Ullrich , Andreas Klöden , Floyd Landis and Carlos Sastre all achieved their personal best at the end of a long mountain stage, and not, as one might assume, in the mountain time trial of 2004. This shows that a longer previous exposure does not necessarily have to have a negative effect. According to all that is known so far, Pantani's record times fall into the heyday of epo-doping, but the times of the 90s are additionally enhanced by the fact that the weight of the racing bikes at that time was over 8 kg. By comparison, Armstrong's bike weighed only 6.8 kg in 2004. However, one should also bear in mind that the competition body weight of Lance Armstrong (approx. 71 kg) was around 12 kg higher than Marco Pantani (approx. 59 kg). If you then determine a system weight, i.e. rider plus bike, and compare the power in watts per kilogram of system weight and accordingly, you get almost the same values ​​(around 6.1 watts per kilogram of system weight, i.e. driver and bike). In other words, both drivers were in top shape on the mountain "on paper" and were almost equally strong.

So far, only three winners from L'Alpe d'Huez have won the overall ranking of the Tour of the same year: Fausto Coppi in 1952, Carlos Sastre in 2008 and Geraint Thomas in 2018. Lance Armstrong also managed the stage to L'Alpe d'Huez and in 2001 win the overall ranking in the same year, but on October 22, 2012 all victories at the Tour of France were revoked due to years of doping abuse.

At times, L'Alpe d'Huez was also referred to as the "Mountain of the Dutch " because by 1989, eight out of fourteen stage successes were achieved by Dutch drivers. Since then, no Dutchman has been able to continue this tradition. In the “Nations Cup” on this mountain, the Netherlands are still just ahead of the Italians (7 wins) with eight wins.

In 1999, a photographing spectator brought down the leader Giuseppe Guerini shortly before the finish. Despite the fall, Guerini managed to win the stage.

In 2010, L'Alpe d'Huez was included as a premiere in the program of the Critérium du Dauphiné , after the increase was missing for the first time since 1976 in the Tour de France for two years in a row.

In 2013, L'Alpe d'Huez was again part of the Dauphiné tour - in the month before the double ascent of the 100th Tour de France - but not as the final ascent, but at the beginning of the 7th stage.

Winner on the climb from L'Alpe d'Huez at the Critérium du Dauphiné:

Lifts and cable cars in the ski area