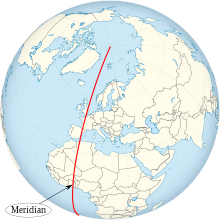 The word Meridian designated latitude and longitude of the earth half a longitude on the Earth's surface , which from a geographical pole runs to another. It is the connecting line of all places on earth where the sun is at the highest point of its daily orbit in the sky at the same time, i.e. where it is also noon . The origin of the word from the Latin circulus meridianus ("midday circle") also indicates this connection.

All points with the same geographical longitude , ie with the same "longitude", lie on the same meridian. The terms 'longitude' and 'meridian' denote exactly the same lines on the earth's surface and can therefore be used synonymously . However, when using the term 'longitude', the aspect of angle specification is emphasized and when using the term 'meridian', the aspect of the position of the sun at noon is emphasized.

Sometimes the term is imprecisely used as a synonym for the full circle of longitude (see Earth's meridian quadrant ).

There is a risk of confusion with the term meridian used by astronomers : They also call the celestial meridian in the short form meridian, but understand it to be a special great circle on the celestial sphere.

Meridians as the ideal line

On an imaginary spherical surface of the earth, the longitudes are, in contrast to the latitudes, always great circles and therefore the meridians are half great circles. Even if the earth is viewed more closely as an ellipsoid of revolution, all meridians are of the same length because of the rotational symmetry . The length of a meridian is on the WGS84 - reference ellipsoid approximately 20,003.93 km.

Starting from a pole, the distance between two meridians increases until it finally reaches its maximum at the equator . The distance between the meridians that are 1 ° apart is called the widening . It depends on the reference ellipsoid used . When Bessel ellipsoid which is Abweitung km at the equator and 111.307 on the 50th latitude , ie for. B. in Central Europe, however, only 71.687 km.

Demarcation line according to the Spanish-Portuguese Treaty of Tordesillas of 1494, approximately at 38 ° W

At the International Meridian Conference of 1884, the Greenwich Meridian was established as the international prime meridian and the mean solar time at this meridian as Greenwich Mean Time . However, the old prime meridians were initially still used: for example, the Paris meridian in France until 1911, for the calculation of time until 1978, or the ferro meridian in German maps until 1923.

Certain meridians limit the time zones into which the earth is divided. A full rotation of the earth by 360 ° takes a day of 24 hours , i.e. 1,440 minutes . As a result, the time interval between two meridians whose geographical longitudes differ by 1 ° is 4 minutes (1.440 / 360). The difference between the local times of two places whose lengths in the graticule of the earth differ by 15 °, is therefore 1 hour = 60 minutes (where the [medium] current time definition is used).

Since the course of the time zones is based not only on geographic, but also practical and political requirements, the difference in legal time between two locations can also be greater or smaller than the local time difference . The defined time zones usually differ by full hours, rarely by half or three quarters ( Nepal ). The poles are a special feature, as all meridians and thus all time zones coincide here. At the pole it is possible to cross all time zones with just a few steps. For the Antarctic it was determined that Coordinated Universal Time applies everywhere .

Görlitz , the easternmost city in Germany , is located on the 15th meridian ( geographical position : 15 ° east longitude), the mean solar time is thus exactly one hour offset from Greenwich . The Görlitz local time is equal to the Central European Time (CET), which is why it is also called Görlitz time .

Monument at the intersection of the 10th meridian east longitude with the 50th north latitude near Arnstein in Lower Franconia ( Lage )49.99805 10,00071

In 1792, the distance of the latitudes between Dunkirk and Barcelona , which lie roughly on the same meridian, was to be determined as precisely as possible. The so-called meridian expedition was carried out by Jean-Baptiste Joseph Delambre , Pierre Méchain and his assistant Jean Joseph Tranchot . Méchain and Tranchot took over the southern and Delambre the northern sector. The expedition lasted a total of seven years , hampered by the effects of the French Revolution and armed forces (invasion by Prussia and the Franco-Spanish War). The baseline of the triangulations was measured near Paris. Their results were accepted by an international conference of scientists in Paris in 1799. A direct consequence was the calculation and construction of the original meter , which was initially used as a unit of measurement throughout France. Its deviation due to the measurement inaccuracy was only 0.2 millimeters compared to later measurements. The then new unit of measurement was defined as the ten millionth part of the distance from the pole to the equator. Another finding of the expedition was that the true shape of the earth is not a regular ellipsoid .