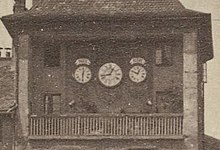 The term local time is used to indicate the time of day as follows:

The zone time is also a local time, namely the mean local time or mean solar time at a location on the reference longitude of the relevant time zone . As such, it is applied within an entire time zone, ideally 15 degrees of longitude.

Before the introduction of time zones, mean local times were applied more or less strictly across regions in the same way as zone times. Such relatively small areas were e.g. B. the states in the German Reich : Prussia (mean local time of Berlin as so-called Berlin time ), Bavaria , Württemberg , Baden , etc. The initiative came from the railway companies so that location-independent timetables could be created.

The Berlin time was the first local time that, from 1833, could be set to a distance of several hundred kilometers with an accuracy of one minute. It was valid on the 588 km long line of the Prussian optical telegraph and was synchronized at the latest every three days by means of a pointer signal over 62 stations, all equipped with a Black Forest clock .

The significance of local time as solar time is older, but its use as zone time today is the more common.

The indication of the time of day was originally related directly to the position of the sun in the sky and measured with the help of a sundial . Since the solar time depends on the place on the earth's surface, different places (more precisely only places with different degrees of longitude ) have a different time of day. Each place had its own time of day called the local time of that place.

In the time of day measured with mechanical clocks since around the end of the Middle Ages , the "time maker" is no longer the unevenly passing solar time, but the evenly passing mechanical time. The time maker on a large scale is still the sun or a fictitious or average sun that runs evenly through the sky, but also shows the time of day depending on location (in reality, the mechanical clock does it). It is called mean local time (MOZ) or mean solar time (MSZ). The time given by the real sun became true local time (WOZ) or true solar time (WSZ).

With the introduction of the zone time (mean local time on the degree of longitude on which the zone time is based), the role of the sun as a time maker was further diminished. The zone time is the same in all locations within a time zone . Only when changing to another time zone does a different time of day apply, which is called local time in addition to zone time in memory of the past (use of the local time of a central location) .

Difference between solar and zone time

The solar time changes by ± 4 minutes if the geographical longitude increases or decreases by 1 °. According to solar time, it is 12 o'clock at the respective location when the sun is highest there (more precisely: in the meridian ). The zone time changes by 1 hour from one theoretically 15 ° wide time zone to the next. If the reference meridian runs centrally through the time zone, the zone time at the edge locations in the time zone deviates ½ hour from solar time. In reality, the time zones often fray not insignificantly at their edges, and / or the reference meridian is not in the middle or even outside the time zone. The difference between zone time and solar time is in the order of magnitude of hours in some places, so that the role of the sun as a time maker has more or less been lost.