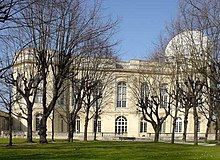 The Paris Observatory ( French: Observatoire de Paris ) was founded in 1667 by Louis XIV and has been one of the most renowned research institutes in astronomy since the 17th century . It's in Paris on avenue de l'Observatoire . Today it has two branch offices in Meudon and Nançay and employs around 800 people.

The observatory was built on the Meridian of Paris established that on June 21, 1667 the day of the summer solstice , by Adrien Auzout , Jacques Buot , Bernard Frénicle de Bessy , Jean Picard and Jean Richer , mathematicians and astronomers of the Académie Royale des Sciences , by a mark was placed on a stone. The groundbreaking architecture of the main building was designed by Claude Perrault and completed in 1671. The Paris Observatory is the largest astronomical research facility in France and one of the most important in the world. It is divided into five departments and various other sub-units and belongs to the portfolio of the French Ministry of Education and Research. Under the director Henri-Alexandre Deslandres , it merged with the Meudon Observatory in 1926.

The first directors were Giovanni Domenico Cassini (Cassini I), Jacques Cassini (Cassini II), César François Cassini de Thury (Cassini III) and Jean Dominique Comte de Cassini (Cassini IV), who held the office in uninterrupted order from father to son dressed for the French Revolution . Over time, many of the Parisian astronomers were members of the world's leading Paris Academy.

The large mirror telescope , built around 1870, was one of the best instruments of its time due to its construction and its inexpensive mounting - a mechanical spiral staircase was attached to it .

Among other things, the observatory achieved a hitherto unattained sharpness with the new photographic technology - especially when taking pictures of the earth's moon - and published the famous Parisian lunar atlas .

In earth measurements and geophysics, the observatory cooperated with other institutes and took part in almost all important degree measurements .

Dome of the telescope on the former Meudon Castle

The Meudon Observatory was founded in 1875 and incorporated into the Paris Observatory in 1926. The former Meudon Castle, which was provided with a large dome to accommodate a telescope, served as an observation point. It houses one of the largest telescopes , a double refractor with openings of 82 cm and 63 cm, which was installed in 1893. In 1965, the Meudon solar observation tower was built on a site belonging to the observatory in Meudon .

The Nançay radio telescope in the small community of Nançay in the Cher department was built in 1953.