The title of this article is ambiguous. Further meanings are listed under Solstice (disambiguation) .

The length of the day on June 21 at different latitudes 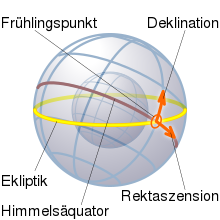 At the solstices, the ecliptic, as the apparent path of the sun on the celestial sphere, has the greatest angular distance from the celestial equator ; it cuts it in the vernal equinox .

A solstice or equinox , also solstice ( Latin for "sun standstill") called, takes place twice a year run. This date is in latitudes outside between the tropics lying tropics , the highest or the lowest midday sun reached:

Twice in the course of a tropical year , the sun, while apparently moving along the ecliptic north or south of the celestial equator, takes positions with the greatest angular distance. The two turning points are also called solstices and, depending on the hemisphere, referred to as summer or winter solstice . After passing these points of extreme declination - in the summer point or in the winter point - their position approaches the celestial equator again, which is reached in the spring point and autumn point . Together with these two equinoxes ( equinoxes ), the two solstices terminate the astronomical seasons .

The exact definition is: The solstices are the times when the apparent geocentric ecliptical longitude of the sun is 90 ° or 270 °.

The two points in time coincide within a few minutes (see equation of time ) with those points in time at which the sun reaches its greatest northern or southern declination - about 23 ° 26 ′ 20 ″ - and thus its northernmost or southernmost position on the celestial sphere . The small time difference results from the fact that it is actually the barycentre of the earth / moon system that moves evenly in the earth's orbital plane ( ecliptic ) around the sun, while the earth itself orbits this common center of gravity and is usually slightly above it or below this level. Seen from the geocenter, the sun is therefore not exactly on the ecliptic (it has an ecliptical latitude not equal to zero). On the one hand, it does not pass exactly the northernmost or southernmost point of the ecliptic; on the other hand, its variable ecliptical latitude means that the maximum declination is usually not assumed exactly at the solstice points. The twilight at midnight in Europe on June 21st

Near the polar circles there is a day without sunrise at the winter solstice and a day without sunset at the summer solstice ( midnight sun , " white nights "). Next poleward prevails then weeks or months of the polar day or the other pole, the polar night . During these periods without twilight , the daily path of the sun lies completely above or below the horizon.

Between the solstices, the sun crosses the celestial equator and then stands vertically above the earth's equator. These times are the equinoxes or equinoxes. Equinoxes and solstices mark the beginning of the respective astronomical seasons .

Because the solar year is almost six hours longer than the calendar common year with exactly 365 days, the time of the solstices shifts each year by almost six hours to a later time. Since a leap day is inserted in February in leap years such as 2016, 2020 and 2024 (highlighted in bold in the table) , the calendar date is usually one day before that of the previous year.

Without the Gregorian calendar reform , their date would shift seven to eight days per millennium . This was prevented by the fact that - contrary to the switching rule of the Julian calendar - the secular years (these are years whose number is divisible by 100) no longer receive a leap day, unless the year is divisible by 400. But even this switching rule (a year therefore has 365.2425 days.) Can only approximate the actual length of the year (365.2422 days) (a period of 400 years actually consists of 146,096.88 days - in terms of the calendar, however, 146,097 days - in 3200 Years one day too many!).

In the Central European Time Zone , the summer solstice of this century will fall on June 20 or 21 from the 2020 leap year. In the 20th century, it could also enter on June 22nd. This is the effect of the leap day in 2000.

At the moment of the winter solstice, the sun is in the so-called winter point compared to the background stars - one of the two points of the ecliptic that are exactly 90 ° from the spring point ( right ascension = 18h). He is currently in the constellation Sagittarius (Latin: sagittarius); the galactic center is roughly in this direction .

Similarly, at the moment of the summer solstice, the sun is at the so-called summer point (right ascension = 6h) in the constellation Taurus .

The earth's orbit with equinox (green) and solstitial line (red), as well as the main axis of the ellipse (turquoise) with aphelion and perihelion .

The worship of the sun and the returning light goes back to traditions in prehistoric times . The sun is essential for earthly survival. The summer solstice had an aspect of death and impermanence in it. This contrasted with the lengthening days after the winter solstice, which embodied life and resurrection. These turning points were reflected accordingly in rite and mythology . It is noteworthy that the sun is always assigned to the male principle in western cultures, but there is an exception in the Germanic language area, which sees the mother in the sun.

The greater the difference between the harsh winter and the warm summer, the more intensely this day has always been celebrated. In northern Europe, where the nights no longer get dark in the summer season (one also speaks of the white nights ), solstice celebrations - known as the midsummer festival - are more important than, for example, in southern Europe.

The tower of Jericho from the 9th millennium BC. Chr. Indicates the knowledge of the summer solstice, and later Stone Age places of worship such as Stonehenge recorded this point in time by means of the relatively easily ascertainable points of the sun rising and setting , which at the beginning of winter lie approximately in the south-east and south-west. The Nebra Sky Disc, an important Bronze Age find, also documents the solstice.

Some people have always regarded the day of the summer solstice as a mystical day; some celebrate it with secular or religious celebrations. Solstice festivals had a firm place , especially in the Germanic, Nordic, Baltic , Slavic and Celtic religions . The largest unorganized summer solstice celebration in Europe takes place in Stonehenge, the largest in Germany on the Externsteinen . The southernmost summer solstice celebration has been held in the Spanish region of Alicante since 1929 . The Golowan Festival takes place in Cornwall and was first described by William Borlase in 1754 . Since the Christianization of Europe, these celebrations have often been associated with the saint of June 24th, John the Baptist , who was considered a particularly powerful saint ( St. John's Day ). Some of the solstice customs that have survived to this day, such as the St. John's bonfires , are named after him. In Brittany, for example, St. John's Day is sometimes not celebrated until the following weekend. Again, the date is shortly after the actual summer solstice.

The typical June-summer weather and the spring-like mood of growth in nature in the middle latitudes of the northern hemisphere is ideal for open-air events of all kinds. The solstice is a welcome occasion (and for some a conscious reason) for parties or celebrations around this day. Midsummer celebrations are of different religious and philosophical communities such as free religious and freethinkers organized, associations, political parties, volunteer fire departments, municipalities and tourism associations. Pagan or neo-pagan religious communities usually celebrate the solstice with a fire on the 21st. This festival is sometimes referred to as Litha .

For Ásatrú , the so-called Midsummer Festival, after the Yule Festival, is the second most important festival of the year. The summer solstice fire festivals in the Pyrenees are recognized as an intangible world cultural heritage .

The winter solstice was an important festival in many ancient and early medieval cultures , often celebrated a few days before or after the actual solstice date. At the time of the Julian calendar , the solstices were on December 25th and June 24th.

It is disputed whether and in what form the Teutons and other peoples in Northern Europe celebrated the Yule Festival around the winter solstice . It would then have been practiced with fire and light symbolism at the winter solstice. Historically verifiable written evidence is available in the form of calendar sticks with rune symbols . It is undisputed that the word Yule Festival was in use before Christianization. The church had tried in vain to replace the word with other terms ( Norrøn : "Dróttins burðar tíð", Old Swedish: "gudz födzlo hötidh"). The Old English, Nordic and Gothic documents all come from Christian times. It is therefore difficult to get a picture of the various festivals from the scarce sources of Norse literature . This applies to the aforementioned “alfablót” of the Scandinavians and the “night of the mothers” among the Anglo-Saxons.

Zoroastrians and Muslim peoples of the Iranian culture and Central Asia celebrate Yalda night at the winter solstice . In India and Nepal, Makar Sankranti takes place at the end of December / beginning of January . In Satanism, too, the solstices have the character of a holiday.

At the time of National Socialism , the supposedly old Germanic solstice celebrations were "revived" and integrated into the symbolism of "people, blood and soil " as official holidays , especially by the SS .

William Shakespeare's comedy A Midsummer Night's Dream (dt. " A Midsummer Night's Dream ") is during a summer solstice in the classical unities of time, place and action of the closed drama . In addition to the other two, Richard Wagner takes "the beautiful festival, St. John's Day" (bass aria) as the classic unit of time in his cheerful opera Die Meistersinger von Nürnberg . Ingmar Bergman also adheres to the three classic units in his 1955 film "The Smile of a Summer Night" ( Sommarnattens leende ).

Determination of the circumference of the earth

Eratosthenes determined about 200 BC. At a summer solstice (highest point of the sun) the circumference of the earth .