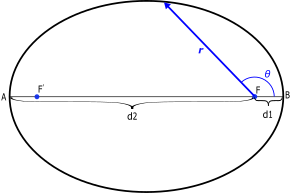 The apses ( main vertex ) of an orbit ellipse:
A = periapsis (d1 = periapsis
distance ) B = apoapsis (d2 = apoapsis distance)
(F, right = center of gravity = one of the two focal points )

Apse or apse ( plural apses ) in astronomy refers to one of the two main vertices of the elliptical orbit of a celestial body around another as a central body.

The apoapsis is that vertex with the greatest distance from the central body and the periapsis that with the least; both together are called apses , the straight connecting line is called the apses line .

In the case of an orbit - for example of planets - around the sun , perihelion denotes the point closest to the sun and aphelion the point furthest from the sun.

In an orbit around the earth - for example the moon - perigee denotes the point closest to the earth and apogee the point furthest from the earth.

Apsis , as an ancient Greek word ἁψίς hapsís (in the Ionic dialect without a hint of the air, ἀψίς apsís ) means “link”, “mesh of yarn”, but most often “vault”, especially “triumphal arch” or “heavenly vault”. With the meaning "vault" it was borrowed for the term apse , which is commonly used in architecture . In astronomy, it is not only used in the sense of "(heaven) vault", but also for the apex of a trajectory. Apo and peri are prefixes with the meaning “away from a place”, “distant” or “around something”, “near”.

In relation to the central body

Apses of elliptical orbits around certain central bodies are often given special names. For those related to the sun, earth or moon there are frequently used technical terms, formed from a part derived from the Greek name and the prefix Ap (o) - for the distant or Peri- for the near main vertex.

Pericenter and apocenter ( Latin centrum " axis point") specifically designate points in a multi-body system and relate to its center of gravity, more precisely the barycenter . An example is the point on the orbit of a partner in a binary star system on which the partner is closest or farthest from the barycenter of the system. If the apses of an orbit are mentioned in a general celestial mechanical context without specifying a specific central body, then they can also be referred to as pericenter and apocenter , but also as perifocus and apofocus ( Latin focus " focal point ").

The line connecting the two apses is the line of the apses .

The relationship between (numerical) eccentricity and the apsis distances is

Apses and line of apses

The Earth's orbit : The points of the equinoxes ( equinox line , green) and the solstices ( solstice line , red) do not lie on the main axis of the ellipse (turquoise).

The straight line through the two apses is called the apse line . The line connecting the two points corresponds to the main axis of the ellipse. When calculating the path, its half size is often given as the “major semi-axis” or “mean distance”.

If one takes a closer look at the orbital data and averages the two apsidal distances, it is sometimes noticeable that this average distance differs from the major semi-axis . If the central body is not significantly larger than the second, the effect of the barycentre is made clear. Because not the center of the central body is in the focus of the orbit ellipse , but the barycenter as the common center of gravity of the celestial bodies .

When the system Earth-Moon the barycenter is (the Earth-Moon gravity ) nearly 5000 km from the Geozentrum , so the moon facing area of the Earth's mantle . The center of the earth therefore describes an ellipse with a diameter of 10,000 km every month.

In the case of double stars (see below) this effect is even greater and can in many cases even be recorded astrometrically . For example, a periodic change in location of the bright star Sirius was detected as early as 1800 , but its small companion was not optically detected until 1862 - as the first astrometric double star .

When detecting exoplanets with the radial velocity method, this effect is used to deduce the mass and period of orbit of the planets from the radial movement of the parent star around the barycentre.

During the passage of a body through its periapsis, it has its greatest orbital speed because up to this point - due to the decreasing orbital radius - it falls towards the center of gravity; its lowest orbital speed during its passage through the apoapsis, because up to that point it moves away from the center of gravity. The angular speed (apparent speed) in the center of the revolution changes even more because, in addition to the arc traversed in the same period of time, the distance (the radius) is also shortened - this effect is noticeable when observing the daily movement of the moon or a satellite .

In the absence of the effects of gravity from other celestial bodies and neglecting relativistic effects, an apsidal line would always have the same orientation in space. However, since the orbiting body is usually exposed to such disturbances, the apse line does not remain fixed, but rotates slowly in the direction of the orbiting celestial body. This process is called the turning of the apse . If the orbit of a celestial body shows a noticeable apse rotation, a distinction must be made between its anomalistic orbital period (return to the same apse) and its smaller sidereal period (return to the same position in relation to the fixed star background).

The disturbances from other celestial bodies can cause, in addition to the apsidal rotation, also slight, brief deformations of an orbit. The greatest and the smallest distance of this deformed path from the central body will be at slightly different places than the apses of the undisturbed path. This influences both the times when the vestibule passes and the vestibule distances involved.

Perihelion passage of the earth-moon center of gravity

The center of gravity passes through the vertex of the ellipse at mean time intervals of an anomalous year , i.e. 365 days and a good six hours. After a calendar year of 365 days has elapsed, the focus therefore needs another six hours to reach the apex again. Each round therefore takes place at a time about six hours later, until after four years a leap day brings the round forward again by one day (compare similar patterns at the beginning of the individual seasons ). However, since the leap year scheme is designed to synchronize the calendar with the tropical year and not with the anomalistic year that is about 25 minutes longer, the time of the vertex passage moves backwards through the calendar in the long term.

The table clearly shows the accumulating annual delay and the jumping back after a leap year (marked in bold). The remaining deviations from strict regularity are due to the gravitational influences of the other planets, which deform the earth's orbit slightly, so that the exact position of the point closest to the sun always moves a little back and forth.

Closest to the sun of the center of the earth

The center of the earth follows the already mentioned serpentine line over the Keplerellipse traced from the center of gravity earth / moon (barycenter). The time when the Earth is closest to the Sun is therefore generally not the time at which the Barycentre passes the vertex of the ellipse. It is also determined by the phase of the moon that exists at perihelion:

In the years 2010 to 2020, the closest proximity to the sun is reached a maximum of about 29 hours earlier (2016) or a maximum of about 30 hours later (2017) than the apex passage of the Baryzentrum, see table below. The earliest and latest calendar moments of the greatest closeness to the sun on earth in the years 1980 to 2020 are January 1, 1989 23 h CET (about 27½ hours before the apex passage of the Barycentre, waning moon, leap day preceding February 29, 1988) and the 5 January 2020 9 h CET (about 27 hours after the apex passage of the Baryzentrum, waxing moon, following leap day, February 29, 2020). Please note that when selecting the calendar date, because of the switching period "oscillation" of the calendar, no statement can be made about the greatest time intervals from the moment of the apex passage through the barycenter, cf. Values ​​1989 versus 2016 and 2020 versus 2017.

Because of the slow drift of the perihelion (rotation of the apsidal line ), these times will shift to later calendar dates. Around the year 1600 was closest to the sun between December 26th and 28th. Around the year 2500 it will fall on January 10-13.

The conditions described for the proximity to the sun also apply accordingly to the distance to the sun. The following table lists times for both cases. 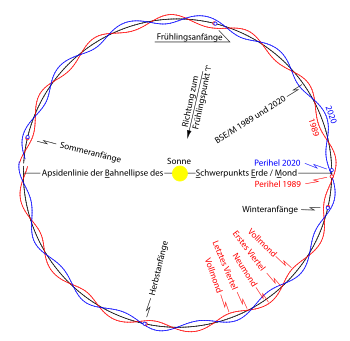