Ceres / ⁠ tseːrεs ⁠ / or - in the nomenclature for asteroids - (1) Ceres having an average equatorial diameter of 964 km, the smallest of the IAU as dwarf planet classified celestial bodies and the largest object in the asteroid belt .

Ceres is named after the Roman goddess of agriculture . It was discovered on January 1, 1801 by Giuseppe Piazzi at the Palermo observatory as the first minor planet . In the first half century after its discovery, it was classified as a planet , later an asteroid ; since 2006 it has been included in the new group of dwarf planets. Your astronomical symbol is a stylized sickle :

The size of Ceres has been given between 650 and 1000 km, depending on the measurement method, since the 1960s. It is only known precisely from observations with the Hubble space telescope and the Dawn space probe from 2015 to 2018. 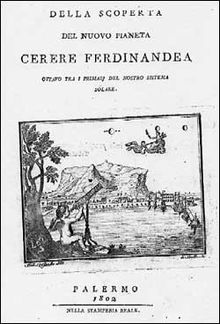 Johannes Kepler already suspected a planet in the "gap" between the orbits of Mars and Jupiter , and the discovery of the Titius-Bode series around 1770 reinforced such assumptions. The " Himmelspolizey ", founded by the astronomers Franz Xaver von Zach and Johann Hieronymus Schroeter , started looking for the presumed planet from 1800. For this purpose, the area around the ecliptic was divided into 24 sections. Each of these sections was assigned to an observatory that would search it for the planet. The Sicilian Piazzi, who initially believed the object to be a comet , was discovered by chance during a review of a star catalog on New Year's Eve 1801.

After Piazzi soon lost sight of the new celestial body due to illness, Carl Friedrich Gauß managed to make a good prediction of its position using his newly developed method for determining orbit . With this, von Zach was able to find Ceres on December 7, 1801. Gauss's calculations proved to be immensely fruitful way for almost all branches of science, in that it allows for them first method of least squares for regression analysis was applied. As it turns out, Ceres actually moves around the Sun at exactly the distance between Mars and Jupiter predicted by the Titius-Bode series.

Like Uranus , which was discovered in 1781, Ceres was considered a planet, which initially increased the number of planets in the solar system to eight. It was only when the number of celestial bodies found between Mars and Jupiter rose rapidly around 1850 that the designations "small planets", "minor planets", "planetoids" or "asteroids" became established for these objects, with which Ceres lost its status as a planet. A redefinition of the concept of a planet became necessary at the beginning of the 21st century due to the discovery of several celestial bodies in the size class Pluto . An IAU decision of August 24, 2006 classified Ceres as a dwarf planet such as (134340) Pluto, (136199) Eris , (136472) Makemake, and (136108) Haumea .

Piazzi initially named the celestial body he discovered Ceres Ferdinandea , after Ceres , the Roman goddess of agriculture and patroness of the island of Sicily, and in honor of King Ferdinand IV of Naples, who fled to Palermo in 1798. In Germany , Johann Elert Bode suggested the name Juno (which was then taken up for the third asteroid, (3) Juno ); for a short time the name Hera was also in use (which was later given to (103) Hera ). Von Zach made it clear, however, that "Prof. Piazzi has now baptized his own child, [...] to which he, as the first discoverer, apparently has the right". Since the honor of King Ferdinand encountered resistance in other nations, this part of the name was soon dropped.

In 1803, two years after the discovery of Ceres, the chemical element cerium was discovered and named after this new celestial body.

The synodic period of Ceres is 467 days. During opposition , it is between 1.59 AU and 2.00 AU from Earth and has an apparent magnitude of up to 6.6 mag; so it is only just below the threshold of visibility with the naked eye. Ceres can therefore be found with binoculars or a small telescope .

Ceres is the only dwarf planet in the inner solar system and the largest and most massive object in the asteroid belt . A value of 9.39 × 10 20  kg is given for the mass , which corresponds to the 6360th part of the earth's mass . Ceres has about 3.6 times the mass of the next lighter object in the asteroid belt, (4) Vesta , and combines about 25% of the total mass of this belt.

Observations with NASA -Raumsonde Dawn have shown that Ceres the form of a slightly flattened spheroid km with an equatorial diameter of 964 and a polar diameter of 892 km has. The surface of Ceres is about 2,850,000 km². The rotation period is 9:04:27 hours, the calculated mean density is given as 2.077 ± 0.036  g / cm³ . The measurements from the Dawn space probe showed a slightly higher value of 2.16 g / cm³.

Ceres has a dark carbon-rich surface with an albedo of 0.09. Radar observations have shown that the entire surface appears to be evenly covered in powdery regolith . Outstanding or isolated surface features were first determined in 1995 by UV observations with the Hubble space telescope: A dark spot with a diameter of about 250 km, which was named "Piazzi" in honor of the discoverer of Ceres, was found. Further observations with Hubble in 2003 and 2004 made it possible to create a map which, in addition to “Piazzi” and a conspicuous, bright spot, showed numerous smaller surface features.

The US Dawn spacecraft provided more details in 2015 , revealing densely sown impact craters . The largest named crater called Kerwan has a mean diameter of 280 km and is located on the equator. The wall of the Occator crater rises almost 2,000 meters in height in some places, inside the crater there are some very bright spots, with Cerealia Facula in the middle, the brightest area of ​​the entire celestial body. There is also another group of spots further east called Vinalia Faculae. One of the mysteries is the lack of large craters; one of the explanations is the assumption of an elastic-tough surface. At least the large oval basin Vendimia Planitia could be the inconspicuous remnant of a very old, larger impact structure. Vendimia Planitia has a diameter of up to 750 km and extends south of the equator into the Kerwan crater. The topographical height differences on Ceres are up to 15 kilometers in total.

The bright spots inside Occator and elsewhere that Hubble has already tracked are believed to be salt deposits. Infrared spectral analysis indicates that the bright spots are mostly made up of sodium carbonate with small amounts of silicate minerals and ammonium carbonate or chloride .

As part of the Dawn mission, the dome-shaped cryovolcano Ahuna Mons was discovered, which rises about 4,000 meters near the equator and consists of a mixture of chlorides , minerals and water ice. The average temperature at the equator is around −110 ° C.

In the cartography created for Ceres, the prime meridian runs through the center of the 400-meter-wide Kait crater and divides the surface into a Kerwan hemisphere and an Occator hemisphere.

Researchers at the Italian Institute for Astrophysics INAF found through long-term observations that there are seasons on Ceres . It has been observed that the amount of ice-bearing surface changes in certain places: within six months the ice surface in Juling crater increased from 3.6 to 5.5 km². In addition, landslides have been observed, which are presumably due to melting ice sheets. Scientists also suspect volcanic activity below the surface.

The measurements of the Hubble Space Telescope allow conclusions to be drawn about the composition of Ceres: It is assumed that it is a differentiated dwarf planet with a rock core as well as a mantle and crust made of lighter minerals and water ice . The differentiation is probably due to the the radioactive decay of aluminum - Isotopes 26 Al released heat , thus reflecting a coat may have formed from liquid water already in the early days of the solar system. However, the outer ten kilometers did not melt , but formed a solid crust of ice, while heavy material ( silicates , metals ) collected in the core. Overall, Ceres should consist of 17 to 27 percent by weight of water. The amount of water on Ceres is estimated to be about five times the amount of fresh water on earth . In addition, the ESA - Herschel infrared space telescope was able to detect water vapor around Ceres. The water output is 6 kg / s and takes place in two places on the surface. When Ceres is in its slightly elliptical orbit near the Sun, the release is highest.

The knowledge about the surface could be further refined by Dawn.

An international research group from the Italian Institute for Astrophysics INAF announced in February 2017 that they had found aliphatic organic carbon compounds on Ceres with the help of the Dawn space probe .

Despite its planet-like structure , Ceres did not become a real planet. Presumably, the strong gravity of neighboring Jupiter prevented Ceres from accumulating enough mass to develop from a planetesimal to a large planet.

NASA's Dawn spacecraft reached Ceres on March 6, 2015. The primary mission consisted of mapping the surface of a high Ceres orbit and ended in July 2015. From July to December 2015, Dawn approached in several steps spiraling up to in the secondary mission 380 km; this enables a resolution of 40 meters per pixel. The secondary mission was used to record the soil chemistry in detail and should end at the end of June 2016. In early July 2016, NASA approved funding for the follow-up mission for continued observation to gain more information about the structure and development of Ceres. Ceres was approaching perihelion at this time , which it reached in April 2018, and new insights and discoveries were made through long-term observation. In October 2017, the final extension of the mission to the end of fuel was announced. Dawn was steered into an elliptical orbit that, at 200 km, was closer to the surface than before. This orbit kept the probe and collected scientific data until all hydrazine reserves were used up and then finally ceased operations on November 1, 2018. The last pictures received are from September 1, 2018.

According to the results of a study published in August 2020 based on data from the Dawn mission from 2018, Ceres is an "ocean world" with a large saltwater reservoir under its surface. This is located about 40 kilometers below the surface and extends over a width of several hundred kilometers.

In the book series and television series The Expanse , Ceres is one of the locations.