Semi-axes of the ellipse 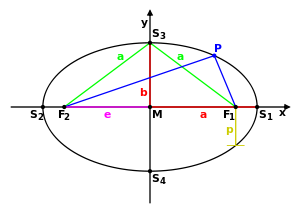 Parameters of an ellipse:

The  two characteristic radii of an ellipse are called semiaxes :

The circle is a special ellipse in which these two semi-axes are the same length, in this case both semi-axes correspond to the radius of the circle.

The major axis (the largest diameter, here ) and the minor axis (the smallest diameter, here ) are collectively referred to as the major axes of the ellipse. Major and minor axes are conjugate diameters . This relationship is retained even when the ellipse is viewed "obliquely", which can be used for the geometric construction of other conjugate diameters.

In astronomy , the semi-major axis of a Keplerian orbit is one of the six so-called orbital elements and is often given imprecisely as the “mean distance” and is usually abbreviated with a . It characterizes - together with the eccentricity  - the shape of elliptical orbits of different celestial bodies.

Such bodies are primarily the planets and their moons , artificial earth satellites , the asteroids and thousands of binary stars .

The two main vertices are called apses , the main axis is the apsidal line : If a body lies in the focal point F 1 and a smaller body circles it on an ellipse, the shortest distance ( = a - e ) is called the periapsis and the longest distance ( = a + e ) from the apoapsis ( perihelion, aphelion at the sun).

In the periapsis (pericenter, main vertex close to the gravic center) the orbital velocity is maximal, in the apocenter minimal.

In geodesy , the axes of the so-called error ellipses are an important means of representing the mean or maximum / minimum point errors. In the adjustment of geodetic networks , the leaves accuracy with which the individual measuring points of the network are determined, represent an error ellipse.