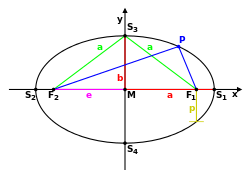 Circle, ellipse, parabola and hyperbola with numerical eccentricity and the same half parameter (= radius of the circle)

The following applies to an ellipse . In the case , the ellipse is a circle .

The numerical eccentricity describes here the increasing deviation of an ellipse from the circular shape.

The following applies to a hyperbola . As it grows , the hyperbola becomes more and more open, i.e. i.e., the angle between the asymptotes increases . Equilateral hyperbolas, i.e. those with right-angled asymptotes, result for .

For a parabola one defines (for motivation see below).

In astronomy , mostly only numerical eccentricity is used and is simply called eccentricity , but in contrast to the notation in mathematics, it is often referred to as. 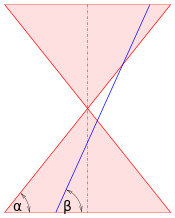 To define the numerical eccentricity on the cone

With eccentricity is first described the deviation of an ellipse from the circular shape. The distance from a focal point to the center point was used as a measure of this deviation (see 1st picture). For you get a circle. Since a hyperbola also has a center point and focal points, the term was extended to the hyperbolic case, although one cannot speak of the proximity of a hyperbola to a circle here. A parabola does not have a center point and therefore initially has no eccentricity.

Another way of describing the deviation of an ellipse from a circle is the ratio . It is . Again, you get for a circle. In this case , the parameter is also the relationship between the distance of an ellipse point to the focal point and the distance to a guideline , which is used to define the guideline for an ellipse (see 4th picture). (A circle cannot be defined with the help of a guideline.) If the guideline definition also allows values ​​equal to or greater than 1, the curve obtained is a parabola if the ratio is, and hyperbolas in the case . The parameter allows to describe ellipses, parabolas and hyperbolas with a common family parameter. For example describes the equation

For the ellipse is .

For is and the ellipse a circle. Is only a little smaller than , i.e. H. is small, then the ellipse is very flat.

For the hyperbola is and therefore for every hyperbola .

For ellipses and hyperbolas applies , for parabolas .

If one understands an ellipse / parabola / hyperbola as a plane section of a vertical circular cone, the numerical eccentricity can be explained