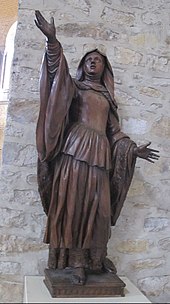 Statue in the west nave

Gertrud von Nivelles (* 626 - March 17, 659 ), also Gertraud , Gertraudt , Gertrude and Geretrudis , was abbess of the Augustinian convent Nivelles in Belgium and is venerated as a virgin and saint in the Roman Catholic Church .

Gertrud was the daughter of Pippin the Elder and his wife Iduberga and thus a relative of Charlemagne . At the age of 14 she entered the abbey in Nivelles founded by her mother . In the middle of the 7th century Gertrud von Nivelles founded the Benedictine Abbey in Karlburg in Lower Franconia. The abbey was one of the first monasteries in the Main Franconian region that particularly cared for the poor, the sick and the infirm. After the death of her mother, Gertrud headed the abbey of Nivelles as abbess from 652 until her death.

Gertrud was very educated and advocated that girls should also read the Holy Scriptures . She brought up the later Belgian national saint Gudula of Brussels in the monastery of Nivelles . In addition to caring for the sick, she also gave food to traveling schoolchildren and traveling companions. She had a hospital built for Irish wandering monks whom she had called to her monastery. So Gertrud soon became known as the “patroness of the country road”. The legend tells that ship travelers who were threatened by a sea monster in the middle of the sea, St. Had begged Gertrude for help in prayer. Then the monster disappeared.

The reliquary of St. Gertrud in Nivelles was destroyed in the German bombing of the city in 1940 during the Second World War. Using some medieval fragments, a new reliquary was created in the 1990s.

In the Middle Ages, many hospitals were under the patronage of St. Gertrude. The Gertrudenminne , also named after her, was drank in the Middle Ages for parting or for reconciliation.

Saint Gertrude is invoked against plagues of mice and rats, she is the patron saint of cats, travelers and pilgrims , gardeners, the poor and widows and the former town of Wattenscheid (today a district of Bochum). The Wattenscheider celebrate the Gertrudiskirmes in spring until today , at the opening of which the provost of the Gertrudiskirche is also present. Regarding the iconographic attribute of the cat, Carlo Melchers suspected a connection with the Germanic goddess Frigg in the 20th century .

In the Main area she is venerated as Gertrud von Karlburg , because she was often on the way between Karlburg and Neustadt am Main (more precisely: the Carolingian castle on the Michaelsberg) ("Gertraudenpfad"). Relics of her have been kept in the Gertraudenkapelle near Waldzell since May 2008.

In the Berlin area, a hospital founded in the 15th century was named Zur heiligen Gertraud , as was a neighboring church. When the center of Berlin was enlarged and rebuilt in later years, the city fathers Gertraud erected a memorial that was placed on the Gertrauden Bridge of the same name, inaugurated in 1896 . 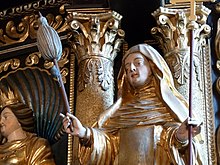 Statue of St. Gertrud at the high altar of the Catholic parish church Grafenbach with a mouse on the distaff 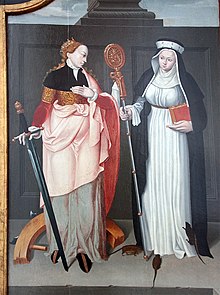 St. Gertrud on a winged altar in the parish church of St. Pantaleon in Cologne to the right of St. Katharina with the abbot's staff, book and mice on her robe

Gertrude is usually depicted in the habit of the Benedictine nuns with the abbess's crook and with mice, sometimes with a book, a spinning wheel, a sailing ship or with two rings on her right arm.