Steinfeld is a municipality in the Lower Franconian district of Main-Spessart and a member of the Lohr am Main administrative community . The districts of Hausen and Waldzell belong to the municipality. A Main Franconian dialect is spoken (according to the language atlas of the Bavarian State Library: Lower East Franconian). The locals in the area are often referred to by the local name Steefld'r Russe .

Steinfeld lies between Lohr am Main and Karlstadt on the Franconian plate (Marktheidenfelder Platte) at the sources of the Buchenbach . Here there is a transition between red sandstone and Franconian shell limestone . The greater part of the municipality is still used for agriculture today; In addition, the municipality cultivates significant forests in the so-called Würzburger Spessart (extreme eastern foothills of the low mountain range). The majority of employees commute to the surrounding cities of Lohr and Karlstadt as well as to Würzburg .

Steinfeld is divided into three districts:

There are the districts : Hausen, Steinfeld and Waldzell. 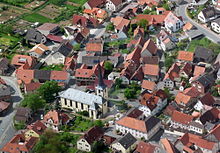 As grave mounds on the Kohlplatte show, the municipality was already settled in the Bronze Age. Steinfeld was first mentioned in a document in 812; in documents from that time it is referred to as Steinvelt in Waldsassengove (i.e. Waldsassengau ). During the time of the tribal duchies , the place was in the Duchy of Franconia . By 1200 Steinfeld was already an independent parish; the Neustadt am Main monastery raised claims to tithe. Around 1336 the parish church was integrated into the Nuwenstat monastery (New Town). In 1614, the new building of the parish church of the Assumption was completed by Prince-Bishop Julius Echter . Clear indications of this are u. a. the building board on the south side of the nave and the tower in the typical real style . In 1842 the nave was extended. As part of the Hochstift Würzburg (Rothenfels Office), Steinfeld came to the Counts of Löwenstein-Wertheim in the Reichsdeputationshauptschluss 1803. From 1500 both belonged to the Franconian Empire . In 1806 it became a Baden media office, which was ceded to Austria in 1819, which left it to Bavaria. According to the parish edict of 1818, today's parish was established there.

The two districts of Hausen (since 1972) and Waldzell (since 1978) belong to the community today. The district of Hausen was first mentioned in a document around 800. Since 1192 Hausen was a branch church of the parish Wiesenfeld . The farmer's guide Kaspar Leyser comes from Hausen . He was beheaded in June 1525 together with two other rebel farmers in Karlstadt. In 1817 the church of St. Cyriakus (probably above a previously existing chapel) was completed, and in 1879 the church tower was raised. The district of Waldzell (formerly: Cella / Zell ) was probably also created in the 9th century as a branch of the Neustadt monastery. There are historical references to St. Gertraud . The Gertraudenkapelle there was built over a spring with the same name (1616 by Julius Echter , extension around 1849). Today's St. Vitus Church was built in 1612 by order of Julius Echter. Parts of the former monastery (built in 1707) are still preserved.

On July 1, 1972, the previously independent community of Hausen was incorporated. Waldzell was added on May 1, 1978.

Günter Koser has been the mayor since May 1, 2014 (supported by the CSU / Bürgerblock as well as by the Hausen Voting Association and the Waldzell Free Voting Group); he was re-elected on March 15, 2020 with 95.0% of the vote.

The 2020 results in the following distribution of votes and seats in the municipal council election:

The description of the municipal coat of arms, introduced in 1982, reads: “In green from a silver shield, in it the uncial capital letter N exaggerated with a black cross, growing silver nimbly Saint Sebastian, who holds two upside down diagonally crossed silver arrows in his right hand, removed top right from a red shield with three lowered silver tips, top left of a gold shield with red diagonal bars “.

Since 1992 there has been a partnership with the French community of Chauvigné ( Brittany ), which is maintained through visits (every two years) and through which close Franco-German friendships have already developed.

According to official statistics, there were 192 employees at the place of work in the manufacturing sector and 52 in the trade and transport sector. There were a total of 879 employees at the place of residence subject to social security contributions. There were three companies in the manufacturing sector and three in the construction sector. In addition, in 1999 there were 77 farms with an agriculturally used area of ​​1887 ha, of which 1666 ha were arable land and 206 ha were permanent green space. The community owns 1230 hectares of community forest, which is managed by its own forest enterprise.

The following institutions exist (as of: 1999):

Municipalities in the Main-Spessart district