Julius Echter von Mespelbrunn (born March 18, 1545 in Mespelbrunn , † September 13, 1617 at the Marienberg Fortress in Würzburg ) was a German Roman Catholic theologian, cathedral dean and politician. From December 4, 1573 until his death he was Prince-Bishop of Würzburg . He is considered a great builder and administrative reformer. He was an important representative of the Counter Reformation , which went hand in hand with the expulsion of Protestants, the re-Catholicization of the Diocese of Würzburg and the re-establishment of the University of Würzburg in 1582. Echter was elected Prince-Bishop of Würzburg on December 1, 1573, shortly after the death of his predecessor Friedrich von Wirsberg . 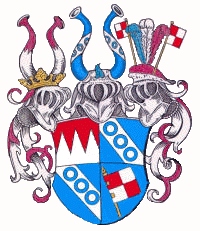 Coat of arms of Julius Echter, with the Echter coat of arms (3 horse rings), the Franconian rake (as Duke of Franconia ) and the Würzburg lance flag

Peter Echter von Mespelbrunn and his wife Gertrud, parents of Julius, depicted on the portal in the inner courtyard of the moated castle Mespelbrunn

Julius Echter was the second son of Peter Echter von Mespelbrunn (* 1520, † January 21, 1576 in Mainz), Electoral Mainz councilor and bailiff for Stadtprozelten and Dieburg , and his wife Gertraud, née. von Adelsheim (* 1525, † 1583 in Wiesentheid). He had four brothers and four sisters:

He spent his childhood at Mespelbrunn Castle , where he was tutored by private tutors. In 1554 he became a collegiate student in Aschaffenburg . From 1557 he was a canon in Würzburg , where he attended the cathedral school. In 1559 he became a cathedral student in Mainz and then went to the Jesuit high school in Cologne . Studies followed in 1561 at the University of Leuven , 1563 at the University of Douai , then in Paris , Angers and Pavia . He concluded his studies with a licentiate.

“The College of the Würtzburg University of Applied Sciences”, completed in 1591

On November 10, 1569, Julius became a real cathedral capitular in Würzburg, in 1570 in Mainz , and in 1571 in Bamberg . As early as 1570 he became cathedral scholar and councilor of the episcopal government chancellery , and on August 4th of the same year cathedral dean . On December 1, 1573, after the death of Friedrich von Wirsberg , who died on November 10, 1573, he was elected Prince-Bishop of Würzburg. He was ordained a priest on May 20, 1575; the episcopal ordination followed two days later.

After the death of Archbishop Daniel of Mainz (March 22, 1582), Echter, who had remained canon in Mainz, was considered a promising successor. In the first ballot on April 19, 1582 he received 12 votes, provost Wolfgang von Dalberg 11. Echter waived before the second ballot on April 20, and Dalberg was then elected unanimously. Attempts to become Archbishop of Mainz in 1601 and 1604 also failed.

Julius Echter's most important enterprise was the implementation of the Counter Reformation in the Hochstift Würzburg, which included the promotion of the Catholic League . He became known as the founder of the University of Würzburg in 1582 and of the Juliusspital in 1579, a hospital for the poor and orphans that still exists today as the Juliusspital Foundation .

Immediately after taking office, Echter began converting and building his seat of government, the Marienberg Fortress, into a representative palace. There he also set up his new court library. The old library was destroyed in a fire in 1572. Echter had new publications acquired at the book fairs, which were delivered as printed sheets and bound by the respective court bookbinder on site. Most of the court bookbinders came from Saxony, and so the Saxon binding style was characteristic of the Würzburg bindings, especially those of the court library. At least until 1590, their bindings were made of light pigskin, which was decorated with the embossed and colored prince-bishop's coat of arms as a supralibros. There are three versions, round, angular and angular with an additional frame, which integrated the ancestral coats of arms into the decorative Renaissance ornamentation. On the green front cut of the larger volumes, the title, name of the owner ("Julius Dei Gratia Episcopus Wirceburgensis Et Franconiae Orientalis Dux") and the year of binding were stamped in gold letters. The court library, which could have contained around 3,000 volumes, was spoiled by the Swedes in 1631 when Würzburg was conquered. Today around 1,600 volumes can still be identified, of which around 1,200 are in the Uppsala University Library , which King Gustav II Adolf (Sweden) had given them as a gift. The rest are scattered all over Europe, a larger collection is in England, 43 real volumes in the University Library of Würzburg , another five in the State Library of Bamberg .

In the renaissance buildings he initiated , Gothic elements were often deliberately integrated. This style is therefore also known as Real Gothic and True style or Julius style called and is a form of Nachgotik .

The Juliusspital (1576) and the Julius University, completed in 1591, including the church (founded in 1582) are the first secular monumental buildings with extensive building areas. The building complex of the Juliusspital, completed in 1588 based on a design by Georg Robin , was replaced by new buildings in the 17th and 18th centuries. Julius Echter had the castle of Marienberg Fortress partially destroyed by fire in 1572 (the prince-bishop's residence) rebuilt and renovated.

The construction of numerous churches (with the well-known real towers ) and schools, the renewal of the state legal system and an administrative reform, which, coupled with strict austerity and the inclusion of secular and spiritual assets, led the diocese out of debt without taxes, were also great achievements to increase.

Julius Echter's role in the so-called Fulda trade was very controversial in the Catholic Church and in the empire . After the prince abbot of Fulda Balthasar von Dernbach had been forced to abdicate by the Lutheran knighthood and the Fulda chapter, the Würzburg prince-bishop Julius Echter was elected administrator of the monastery. Pope Gregory XIII threatened to be banned from church if he did not return Fulda. Balthasar von Dernbach tried to regain power in Fulda through petitions to the Pope and to Emperor Maximilian II . After a lawsuit before the Reichshofrat, which lasted 26 years, Julius Echter von Mespelbrunn had to return the Fulda Abbey on August 7, 1602, and also had to pay damages and pay the legal costs. These events became known as the Fulda Handel .

Julius Echter's counter-Reformation measures meant that Protestants unwilling to convert had to emigrate on a large scale. Echter stated the number of converts in 1586 as 53,000, while those of emigrants were only 34. The Jesuits speak of 62,000 converts. After Rome, Echter had the number 100,000 reported in 1590 (the year of the new, princely-absolutist, Würzburg city order) at the end of his Counter-Reformation.

A three-page anti-Catholic pamphlet published in Tübingen in 1616 accused Julius Echter of wanting to see witches burn “all Tuesday”. This led to the assumption that there had been an above-average number of witch trials in Würzburg under his rule , and to the assertion that Echter had placed himself “at the head of a mighty witch hunt”. Recent source studies refute this representation for the beginning of his reign:

“According to the current state of knowledge, no executions for witchcraft are known from the first 27 years of the reign of the Prince-Bishop. The procedural documents that have been handed down show a similar course of proceedings: Denunciations from the village were countered with an orderly procedure that ended with acquittal or, in one case, expulsion from the country. From 1573 to 1600, according to the current state of knowledge, the Würzburg bishopric was free of litigation and execution. "

Other researchers came to the view that Julius Echter had systematized the witch hunt and thus also laid the foundation for further witch trials after his death in 1617. One year after Julius Echtes death, the Thirty Years War broke out, a catastrophic climax of the “Age of Faith Wars ”.

Echter built the Juliusspital on the site of the former Jewish cemetery. The Jews who had to flee under Echter protested against the bishop's affront.

Echter's tomb, made by Nikolaus Lenkhart, is in the Würzburg Cathedral. His heart rests in a modern stele in the new church .

In the Juliuspromenade (before the middle of the 19th century Grabenweg ) in Würzburg is the " Julius-Spital " , built in 1576, and the Prince-Bishop-Julius-Echter monument. It was created by the well-known Munich sculptor and academy professor Max von Widnmann (1812–1895) and ceremoniously unveiled on June 2, 1847. In the same year, King Ludwig I of Bavaria , the founder of the bronze monumental statue, had a history thaler minted for this. The university founded by him in 1582 is also named after him as "Julius University (zu Wirtzburg)" (later Julius Maximilians University). The architectural style of the real Gothic , which emerged during Julius Echter's reign, was also known as the Julius style or the real style .

In 2017, the Diocese of Würzburg is celebrating a commemorative year for Prince Bishop Julius Echter on the occasion of the 400th anniversary of his death.