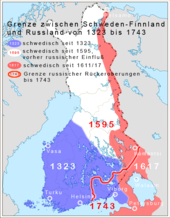 Through the Peace of Stolbowo, Sweden acquires Karelia and Ingermanland (red)

The beheading of Leonora Galigaï on the Place de Grève

Concino Concini , Marshal d'Ancre, the most powerful man in France and advisor to Maria de 'Medici during her reign for her son Louis XIII. , is arrested and killed on April 24th by the palace guards of Ludwig under the orders of Charles d'Albert, duc de Luynes . Maria de 'Medici is sent into exile in Blois. Concinis wife, Mary maid Leonora Dori , is arrested on July 8 because of " witchcraft " and "divine and human lese majeste " executed . King Louis XIII takes power in France . 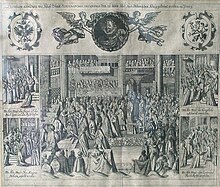 Ferdinand is crowned King of Bohemia

The Scottish mathematician John Napier in his work describes Rabdologiae seu numeratio per virgulas libri duo the Napier computing sticks with which multiplications and divisions can be made. The calculating rods later had a decisive influence on the development of the first calculating machine .

The oil painting The Great Judgment , a commission for Wolfgang Wilhelm von Pfalz-Neuburg , is completed in the workshop of Peter Paul Rubens . It is the largest-format painting that Rubens has ever produced. The canvas panels are sewn together several times. Probably ten to twenty artists worked on the picture, but the only signature on the picture is that of Rubens. The design and the final nuances come from the master.

The coconut palm, emblem of the fruit-bearing society

On the occasion of the funeral of Duchess Dorothea Maria von Sachsen-Weimar , family members and friends meet on August 24th in Weimar for a funeral meal at Hornstein Castle . When during the table discussion the topic of language societies abroad and the lack of a German counterpart came up, Court Marshal Kaspar von Teutleben suggested the establishment of such a circle. Spontaneously, Prince Ludwig I of Anhalt-Köthen and his son of the same name , the three dukes of Saxe-Weimar, Friedrich , Johann Ernst the Elder, join forces . J. and Wilhelm , as well as the Dessau court marshal Christoph von Krosigk and his brother Bernhard von Krosigk, came up with this idea. You found the Fruitful Society on the same day . Prince Ludwig is elected as the first head on the day it was founded.

Depiction of Grete Minde at the city fountain of Tangermünde

Study Church of the Assumption from the southeast