View of the fortress

The fortress Schlüsselburg (historic fortress Nöteborg ) is located on the left bank of the Neva River on Lake Ladoga on a river island in front of the same-named town Schlüsselburg 35 km east of Saint Petersburg .

In 1990 the Schluesselburg Fortress was included in the list of World Cultural and Natural Heritage of Humanity .

According to Russian historiography, the fortress was built in the 14th century by Yuri I Daniilowitsch , Grand Duke of Moscow and Prince of Novgorod at the same time . After the Russian word for growing on the island of hazel (according to another version of the shape of the island, according to another within the meaning of hard nut ) he called them Orechowez (Ореховец), the fortress Oreshek (Орешек). According to the Swedish version, the island was first fortified in 1299 by the Swede Torgils Knutsson . The Swedish name also has something to do with the nut: Nad means nut in Swedish , borg means castle .

In 1323 negotiations were held in the fortress about the Russian-Swedish border in Karelia , the conclusion in German-language historiography is usually referred to as the Treaty of Nöteborg or the Peace of Shlisselburg . The fortress itself remained with Novgorod or later as part of Tsarist Russia and was reinforced with stone walls in 1352 and several towers in the following centuries.

In May 1612 the fortress fell to Sweden after nine months of siege in the Ingermanland War . In 1656 the fortress was conquered by the Russians under Pyotr Potjomkin , but returned to Sweden five years later in the Peace of Kardis . During the Great Northern War , Russian troops were finally able to recapture the fortress for Russia in 1702 after a previous siege and subsequent assault attacks. Peter I then gave the fortress the German name “Schluesselburg”, probably because he saw it as the “key” to conquering an access to the Baltic Sea .

With the victory of Russia in the Northern War and the founding of Saint Petersburg , the Shlisselburg Fortress lost its strategic importance and was subsequently mainly used as a political prison . The most famous prisoner was Tsar Ivan VI. who, after his deposition in 1741, was held captive in the fortress from 1756 until his assassination in 1764. Also Uschurma Sheikh Mansur , a significant military and religious leaders of the resistance of the North Caucasian mountain peoples against the Russian conquest was made after his 1791 capture in Schlüsselburg imprisoned, where he died 1794th 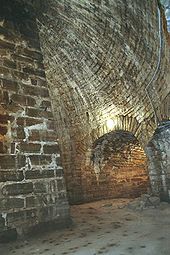 A dungeon in the fortress

The Baltic German dissident Timotheus Eberhard von Bock was imprisoned in the Schluesselburg until 1827 after his criticism of Emperor Alexander I formulated in 1818 . 1,887 were in the fortress four People's Will , including the elder brother of VI Lenin , Alexander Ulyanov , because of the preparation of an assassination attempt on Alexander III. hanged . After the October Revolution , the prison buildings were burned down. From 1928 to 1940 there was a Revolution Museum in the fortress. The Schluesselburg fortress on the island of Orechowy ("Nut Island") was severely destroyed by the Germans during World War II through artillery fire, but it was never captured.