Alexander III received the title of "peacemaker" (Russian mirotworjez) while he was still alive, because no major war with the great powers occurred during his term of office.

His Imperial Highness Grand Duke Alexander Alexandrovich Romanov was born on February 26th . / March 10,  1845 greg. Born in the Saint Petersburg Winter Palace . He was the third child and second-born son of the Russian heir to the throne Alexander Nikolajewitsch Romanow and his German wife Marija Alexandrovna (born Marie of Hesse-Darmstadt).

In character, the young Alexander displayed a simple, coarse, and abrupt manner, at times even harsh. He also differed from most of his family members because of his robust build and immense physical strength.

In 1855 his father ascended the Russian imperial throne as Alexander II . His older brother Nicholas became the new tsarevich, and consequently his upbringing and training at court enjoyed the highest priority. Alexander was assigned relatively little prospects for the throne, and he received an insufficient, superficial training for a grand duke , which was marked by military drill.

After the sudden death of his brother in 1865, Alexander became the new heir to the throne. But despite his title, he had little influence on public life and politics, rather he lived in seclusion in the Anitschkow Palace . Aware of his lack of preparation, the family turned to Konstantin Pobedonoszew , a professor at Moscow University , who instructed the Tsarevich in law and political science . Pobedonoszew, who was known for his extreme conservatism , was to exert great influence on Alexander throughout his life.

Alexander accompanied his father on several state visits and got to know numerous heads of state, important heads of government and foreign ministers. Among other things, he visited the World Exhibition in Paris in 1867 and rode in the same carriage with the French Emperor Napoleon III. and his father when he witnessed an assassination attempt on his father. Since the coachman intervened in time, the assassin Berezovski's bullet hit the horse. In addition, in September 1873 he was at the Dreikaisertreffen in Berlin, where he met the German and Austro-Hungarian monarchs and the German Chancellor Otto von Bismarck .

As an officer , the Tsarevich took part in the Russo-Ottoman War in Bulgaria in 1877/78 . At the subsequent Berlin Congress , Bismarck did not support Russia's demands, but appeared as an “ honest broker ”. Alexander was disappointed with the behavior of the German Reich ; for him, the future of Russia was not on the side of the Germans. With this he was more and more at odds with his father, who based his foreign policy on an alliance with Prussia (later the German Reich), while Alexander felt more drawn to France .

However, Bismarck agreed to a compromise negotiated between Russia and Great Britain at the Berlin Congress, according to which Russia was awarded as compensation for the hegemony of the Slavic peoples in the Balkans and for smaller Bulgaria territorial gains in Adjara . This area was under the control of the Ottoman forces at the time of the Berlin Congress . In the dispute over the city of Batumi , he accepted a more Russia-friendly proposal for Batumi to belong to the Russian Empire on the premise that Batumi was declared a free port. 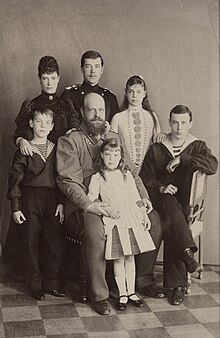 On the deathbed of his brother Nikolai , Alexander promised to marry his fiancée Princess Dagmar of Denmark . On November 9, 1866, the wedding was celebrated in the chapel of the Winter Palace . After her conversion to the Russian Orthodox Church, Dagmar took the name Maria Feodorovna. The connection was described as happy; neither of the two is said to have had extramarital affairs.

The marriage had six children:

Alexander led a very domestic and family life with his Danish wife. Extended summer vacations in the Langinkoski mansion near Kotka on the Finnish coast were an integral part of family life . There the children were immersed in a Scandinavian way of life of relative modesty. 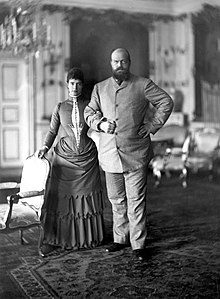 After Alexander's father, Tsar Alexander II, fell victim to a bomb attack by the underground organization Narodnaya Volja (People's Will) on March 13, 1881 , his son followed him as Alexander III. on the throne. The coronation celebrations took place two years later, on May 27, 1883, in Moscow's Cathedral of the Assumption .

The assassination of Emperor Alexander II followed his successors like a ghost, which is why Alexander III. For security reasons, he and his family moved into the well-guarded, fortress-like castle of Gatchina . As a result of the attack, there were numerous anti-Semitic pogroms against the Jewish population across Russia . In response, the new emperor passed the so-called “May Laws” in 1882, which severely restricted the free exercise and freedom of movement of the Jewish minority .

For Alexander, Russia's strength lay in itself. He believed that his empire had been riddled with anarchist troublemakers and revolutionary agitators that needed to be fought. In 1881, Emperor Alexander founded the Ochrana secret police as an instrument of the fight, locking political opponents in Siberian labor camps . Alexander saw an “infiltration” of society as a further problem, especially with regard to German influence. Russia should be a homogeneous state structure in which ethnic differences in religious and linguistic diversity have to be overcome. In order to achieve this goal, Alexander started a radical policy of Russification , which had to be enforced, especially in Poland and the Baltic States, against stiff resistance from the population. For Alexander saw the pillars of his autocratic rule in the Slavic nation, the Orthodox Church and a unified administration. In his politics he was supported by Konstantin Pobedonoszew, who acted as personal advisor to the tsar and rose to the gray eminence at court. In Alexander's view of rule there was no place for parliamentary institutions and Western European liberalism . He overturned almost all his father's proposals for liberalization, although he could not reintroduce serfdom, centralized the administration and weakened the Zemstvo representatives in the countryside. Gradually he became hostile to all classes in Russia. Again the terror flared up everywhere.

Probably the greatest achievement of Alexander III. During his 13-year rule, the foundation stone was laid for the Trans-Siberian Railway , the longest railway line in the world. This connected the European part of Russia with the Siberian eastern regions and was the emperor's central instrument of rule in these remote regions. 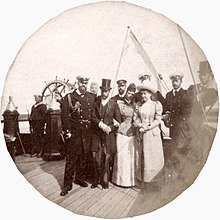 Tsar Alexander III and members of the imperial family, 1893

In terms of foreign policy, Alexander III followed. the traditional policy of the gradual expansion of tsarist rule in Central and East Asia. He wanted to avoid conflicts with other great powers, however, because he was emphatically a man of peace. Alexander did not take the standpoint of "peace at any price," rather he followed the principle that the best way to avoid war is good military preparation.

Although cautious about the German Reich, the traditionally good relationship between the two states only deteriorated towards the end of Alexander's rule. Alexander III concluded the three emperors ' alliance in Berlin in June 1881 with the emperors Wilhelm I of Germany and Franz Joseph I of Austria-Hungary . Russia declared itself neutral in a possible conflict between Germany and France and gained a free hand in the east.

In the years 1881 to 1885, Russian troops occupied the southern part of the Trans-Caspian region, which is in what is now Turkmenistan . At the same time, British troops had been in Afghanistan since the 2nd Anglo-Afghan War . As long as Russian troops were active in southern Transcaspia, there was a risk of confrontation with Great Britain. In this case, the Russian Empire could benefit from the Three Emperor League, which guaranteed the neutrality of the German Empire and Austria-Hungary.

At the same time, Alexander III. a rapprochement with France, partly because of his personal inclinations, but above all Alexander was looking for investors for the expensive Trans-Siberian railway and to finance the burgeoning industrialization . Since France had been isolated by Bismarck for 20 years, this rapprochement could be won over. The open break occurred in 1890 when the German Kaiser Wilhelm II did not extend the reinsurance treaty with Russia. Now the way to a Russian-French alliance was free. A year later, the two governments signed an agreement to consult in the event of a threat to peace - the forerunner of the 1894 partnership .

The attempt of the Cossack Nikolai Aschinow to establish a Russian presence in Sagallo in French Somaliland in 1889 also fell under his rule . However, Alexander soon distanced himself from this project in order not to strain relations with France.

On the return from a trip to the Caucasus , the emperor and his family were affected by a railway accident on October 17, 1888 (Julian calendar) or October 29, 1888 (Gregorian calendar) near Borki together with his entourage . The court train derailed and fell down a slope. The cause could not be clarified. When the roof of the dining car threatened to fall on the passengers, Alexander is said to have raised the roof with his shoulders until everyone was safe. The imperial family got away with the horror. According to the doctors, this superhuman exertion left permanent damage to his organs.

Six years later, the emperor fell ill with severe kidney disease ( nephritis ), presumably as a result of the long-term consequences of the accident, and died on November 1, 1894 in the Livadija Palace in the Crimea , where he had been on vacation.

His remains were interred in the Peter and Paul Fortress of Saint Petersburg.

In Russia, after the collapse of the USSR, the personality of Alexander III. idealized to a certain extent and mainly used by nationalist circles. On November 18, 2017, President Putin dedicated the monument to Alexander III in Livadia Park in Crimea . a.