In response to the Spanish conquest attempt in the previous year which sends British Queen Elizabeth I , the English armada led by Admiral Sir Francis Drake and General Sir John Norreys to the Iberian coast with orders to Spanish track warships and sink, the Portuguese rebels to to support the pretender António von Crato from an extramarital sideline of the house of Avis , which died out in 1580 , and to conquer the Azores . The expedition ends with heavy losses of its own without reaching the set goals. The attack on the port city of La Coruña is repulsed and Lisbon remains firmly in Spanish hands. The sack of the island of Porto Santo , part of the Madeira archipelago, remains Drake's only successful undertaking.

In marrying by proxy married on August 20 at Kronborg Castle in Denmark the Scottish King James VI. Princess Anna of Denmark and Norway . Almost two weeks later, the bride travels to Scotland , but has to turn off to Norway because of bad weather. The wedding, at which the bride and groom see each other for the first time, will finally take place on November 23 in Oslo . 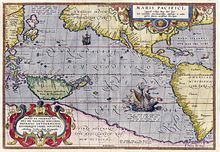 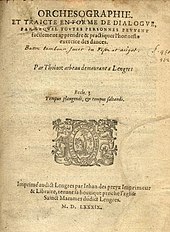 Cover picture of the orchésography , edition 1589

The electoral councilor in Trier , Dietrich Flade , was arrested on April 22 at the instigation of Auxiliary Bishop Peter Binsfeld on charges of witchcraft . He was sentenced to death by fire on September 18 and executed on the same day.

The presumably mentally ill Peter Stump is found guilty by the courts in Bedburg on October 28th for having committed at least 16 murders, rape and incest in the form of a werewolf . Furthermore, he is accused of magic and living with a "devil". A few days later he is wheeled and beheaded to death. The case is receiving attention across Europe. After Stump, werewolves in the Rhineland are still called Stüpp today .

Abraham Ortelius : Map of the Pacific 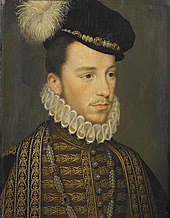