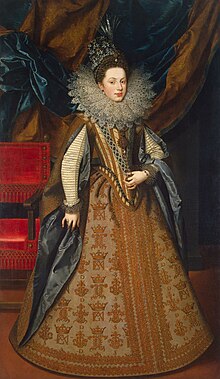 Princess Margaret of Savoy (born April 28, 1589 in Turin , † June 26, 1655 in Miranda de Ebro ) was by marriage Duchess of Mantua and Montferrat and in 1635 she was appointed as the last Spanish viceroy of Portugal .

Margaret was the eldest daughter of nine children of Duke Charles Emanuel I of Savoy (1562-1630) and his wife of the Infanta Catherine Michaela of Spain (1567-1597), the second daughter of King Philip II of Spain and Princess Elizabeth of France from Valois . Her grandparents were Duke Emanuel Philibert and his wife Marguerite de Valois-Angoulême, duchesse de Berry .

When Philip IV (1605–1665) succeeded the Spanish and Portuguese thrones in 1621 , the situation worsened. The king appointed the Duke of Mantua's widow, Princess Margarete, viceroy in Portugal. This ruled there with the help of their Portuguese State Secretary Miguel von Vasconcelos.