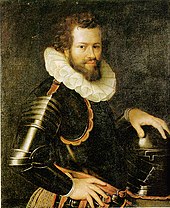 The Imjin War begins on April 14th with the attack on the Korean port of Busan by the Japanese ruler Toyotomi Hideyoshi . Seoul falls just 20 days later . The provinces of P'yŏngan-do and Hamgyŏng-do come under Japanese control. The Korean royal court flees to the Yalu in the city of Uiju. Part of the Japanese army remains in Seoul while the other pushes further north. On June 8 after the Battle of Chungju falls Hanseong . After taking the fortress city of Pyongyang , the Japanese stopped the advance to wait for supplies.

Statue of Yi Sun-sin in Seoul

In the meantime, however, the Korean fleet, under the command of Admiral Yi Sun-sin , has achieved decisive victories over the Japanese fleet through strategic skill and with the help of the turtle ships newly developed this year , including on June 16 in the sea ​​battle of Okpo win and thus prevent the supply routes of the Japanese. Nationwide, the Korean people, especially from the Yangban class , organize loyal armies, and the government forces are ultimately also supported by China under the Ming dynasty , as China does not want to allow its southern buffer state to be threatened. A Chinese army under General Li Ju-sung is pushing the Japanese back south. As early as autumn 1593, the Korean government was able to move back into Seoul and peace negotiations between Japan and Korea could begin. 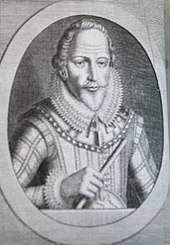 The English explorer Thomas Cavendish is killed on the journey that began last year. His companion John Davis discovers the Falkland Islands after a storm , but without entering them. His return trip is also extremely lossy. Of the 76 men of the original crew, only 14 reach the home port.

In Japan under Toyotomi Hideyoshi the red seal system is mentioned for the first time. Red seal ships , armed merchant ships with a red seal patent from the early Tokugawa shogunate , sailed to Southeast Asian ports until 1635 .

For the first time in Saxony , the Dreibrüdertaler is minted with the portraits of the three underage brothers Christian II , Johann Georg and August .

The Bishop of Malta Tomás Gargal founded the Collegium Melitense in Valletta on November 12th at the suggestion of Pope Clement VIII and the Grand Master of the Order of Malta , Hugues Loubenx de Verdale . Today's University of Malta is the oldest Commonwealth University outside of Great Britain and to date the only university in Malta .

Queen Elizabeth I founds the University of Dublin under the name The College of the Holy and Undivided Trinity of Queen Elizabeth near Dublin as the first university in Ireland .

The architect, painter and sculptor Domenico Fontana is dismissed by the new Pope Clement VIII on charges of misappropriating public funds and goes to Naples. There he discovered inscriptions during canal construction work, but nobody was interested in them at the time. Only 150 years later does it become clear that Fontana discovered the buried Pompeii . 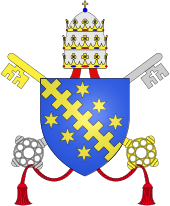 Map of Nova Francia around 1592 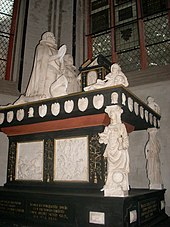 The tomb of Christoph zu Mecklenburg 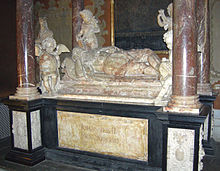