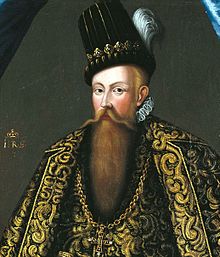 Johann III. was the eldest son of Gustav I of Sweden and his second wife Margareta Eriksdotter Leijonhufvud .

Johann became Duke of Finland on June 27, 1556 . When his older half-brother Erik became King of Sweden, Johann was reluctant to accept his new position of power. The open rift between the brothers occurred when Johann married Princess Katharina Jagiellonica on October 4, 1562, against his brother's will . She was the younger sister of the Polish King Sigismund II , with whom Erik was in dispute. In addition, Johann von Sigismund received seven fortified castles in Livonia for a deposit of 120,000 thalers .

In Erik's opinion, this was clearly contrary to the previous agreements. Erik asked Johann to give up the locks and to make a clear decision between Sweden and Poland. Since Johann reacted evasively to these demands, he was accused of treason in April 1563. In June of the same year the final judgment was made, which should deprive Johann of his property and his right to the throne and his life. A large army was sent to Johann's castle in Åbo to enforce the sentence. Johann defended himself for a few weeks and gave himself up on August 12, 1563, on the condition that he would remain alive and that his captivity should be appropriate.

He was held at Gripsholm Castle with his wife for about four years . In the autumn of 1567, Erik XIV fell into a state of confusion, which led to the release of Johann. When Erik had calmed down again in 1568, Johann feared that he would be captured again. He then initiated an uprising against Erik's government together with his youngest brother Karl and other nobles. This uprising spread rapidly, and on September 29, 1568, Johann entered Stockholm with his army. Erik XIV was taken prisoner and shortly afterwards John was honored as king by officials of the capital and the warriors present.

In January 1569, Johann was recognized as king by the Swedish Diet . But he had to remove some power restrictions that Erik XIV had imposed on the nobility. As a result, the difference between the various classes of the nobility increased. Johann still felt insecure about his imprisoned brother. In 1571 he gave his guards the order to end Erik's life if there were any signs of Erik's liberation. Erik's death in 1577 may be due to such orders.

Contrary to the tradition of his father, Johann supported the Catholic Church in the hope of a strong Swedish universal church for Catholics and Protestants. The result was just a new Catholic reaction in Sweden. Above all, the fact that he raised his son Sigismund according to the Catholic teachings played a decisive role. Johann had actually planned to tie his son more closely to the Polish royal family. In the end, the Swedish aristocracy had almost the same status as it did during the Kalmar Union .

In terms of foreign policy, Johann increasingly turned his attention to the Baltic States . In 1570 he ended the three-crown war that his brother Erik had started. Then he started a war against Russia , which lasted with varying intensity until Johann's death. The capture of Narva in 1581 was his greatest achievement.

Johann died on November 17, 1592, leaving his empire weakened by wars and domestic disputes. It lies in the cathedral of Uppsala buried.

Johann III. as a builder

Johann called many German and Dutch builders, sculptors and painters to Sweden to carry out his extensive building projects. He also participated personally in the planning of various buildings and even provided his own construction drawings. Johann preferred the Italian Renaissance style and can be seen as the center of the growing art movement during his reign.

A special point in Johann's interest in building was the preservation of existing structures. Some ecclesiastical buildings that had fallen victim to fire have been rebuilt, including the cathedral churches of Uppsala, Västerås , Linköping and Skara . In Stockholm some older churches have been restored and rebuilt, e.g. B. the Storkyrka and the Riddarholm Church .

Johan had chapels built for his larger castles . The Stockholm Palace was significantly expanded and refurbished. Johann had two more castles built for his wife and defensive structures were built for many others during Johann's time.

In 1562 he married Katharina Jagiellonica, who gave him the children

Even before his first marriage, Johann had an illegitimate daughter, Sofia Gyllenhielm (around 1556–1583), with his mistress Katarina Hansdotter .