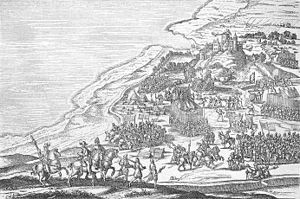 Frederick II of Denmark and Norway during the conquest of Älvsborg (September 4, 1563)

The Three Crowns War (also known as the Nordic Seven Years War ) between Denmark and Sweden from 1563 to 1570 was part of the Nordic Wars . It was named after the Swedish three crowns in the Danish coat of arms. In the Peace of Stettin in 1570, Sweden surrendered Livonia and paid reparations to the German Hanseatic League.

Sweden left the Kalmar Union in 1523 and became an independent kingdom under Gustav I. Wasa . When the Danish King Christian III. Nevertheless, the Swedish three crowns were added to its own coat of arms, this was seen by the Swedish side as evidence that Denmark continued to lay claim to Sweden.

Nevertheless, there were joint efforts with Denmark to secure dominance in the Baltic Sea. They were allies in the Livonian War to stop Russia's push to the Baltic coast, and together they fought against the power of the Hansa .

After the death of Gustav I. Wasa and Christian III. ambitious new monarchs took power in both countries - Erik XIV in Sweden and Frederick II in Denmark. Sweden conquered Estonia in 1561 and thwarted Denmark's plans to regain what was once Danish territory (until 1346).

The war became inevitable when, in February 1563 , Denmark arrested Erik's envoys, whom he had sent to Hesse to start marriage negotiations with the local Princess Christine of Hesse . At about the same time, Erik had integrated the Danish and Norwegian coats of arms into his coat of arms. The Hanseatic city of Lübeck , without much support from the Hanseatic League, joined Denmark in June because Sweden was obstructing trade with Russia . Poland followed in autumn, hoping to gain further power in the Baltic region. When the Swedish fleet sailed back from Rostock with the negotiating delegation, it was destroyed on May 30, 1563 in the sea ​​battle off Bornholma Danish squadron. In June 1563, the Danish declaration of war on Sweden followed. 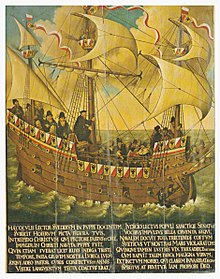 Memorial painting for the preacher on the Lübeck fleet Sweder Hoyer. He died of an epidemic during the war in 1565.

The fighting took place mainly in the south of Sweden and led to a constant change in the balance of power in this region. The Älvsborg fortress fell to Frederick II of Denmark and Norway on September 4, 1563. Fought not only on land, but also and mainly on the Baltic Sea. The naval battles brought about a maritime arms race between the parties that was widely noticed in Europe and led to innovations in warship construction. While the construction was previously geared almost exclusively to the warfare and the transport of mercenaries and mercenary troops to land at the site of a land conflict, fighting at artillery distance gained importance for naval warfare. The ships of the line used were therefore significantly larger. After initial losses, the Swedish fleet was able to achieve some decisive victories at the end of 1565 and was then master of the Baltic Sea region for a long time. In 1562 there were no major naval battles under the Danish admiral Peder Skram . Only in the following year under his successor Herluf Trollethere was a first sea battle on May 30, 1563 in the central Baltic Sea near the island of Bornholm. In the following year, 1564, on May 30th, the (first) sea battle of the war between the islands of Öland and Gotland took place . The Lübeckers, allied with the Danes, under Admiral Friedrich Knebel , succeeded in boarding the Swedish flagship Makelös and capturing the Swedish Admiral Jakob Bagge and his deputy Arved Trolle . The Makelös sank in an explosion shortly after boarding . This interim success made financing easier and favored the arms race between the parties. Further naval battles followed on July 12thWarnemünde and on August 14, 1564 again between Öland and Gotland, where the Swedes were under the command of their admiral Claus Horn . In the following year 1565, after a battle off the coast of Pomerania on May 21 , the parties met again on June 4 in the sea area of ​​the Mecklenburg Bay . The Danish admiral Herluf Trolle died three weeks after the battle as a result of his injuries in Copenhagen. As early as July 7th, 1565, there was another sea battle in the sea area between the islands of Bornholm and Rügen .

Bartholomeus Tinnappel, as mayor of Lübeck and commanding admiral of the Hanseatic fleet, fought a sea battle with the Swedes between the islands of Öland and Gotland in July 1566 . On July 19, 1566, after this battle, a large number of the warships of the Danish-Luebian fleet sank because the anchorage was unfavorable for the weather. Denmark and the Hanseatic League thus lost a large part of their sea power.

On the land side, the battle of Axtorna had already taken place on October 20, and on August 9, 1566, the parties of the war met at the Battle of Brobacka .

Swedish troops invaded Norway in 1567 , but at the same time Erik XIV fell into a state of confusion, which restricted Swedish warfare. The Danish side was also exhausted and after Erik was deposed as king the acts of war were temporarily suspended.

Even in the first years of the war there were various attempts to resolve the dispute peacefully. Among other things, the German emperors Ferdinand I and Maximilian II campaigned for negotiations. During the uprising of John III. against his brother he led negotiations with Denmark, which on November 18, 1568 led to the Treaty of Roskilde . However, this was broken by the Swedish side in 1569 and the fighting began again.

Another attempt at mediation by Maximilian II finally led to the Peace of Stettin on December 13, 1570 . Sweden dropped its claim to Skåne , Halland , Blekinge and Gotland and the dispute over the three crowns was postponed to later negotiations. Due to its isolated position and the impending danger from the Russian side, Sweden also had to surrender its possessions in Livonia and pay considerable sums of money to the German Hanseatic League.