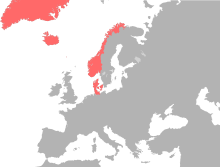 National territory of the Danish-Norwegian personal union until 1814

Denmark-Norway was a personal union of Denmark and Norway from 1380 to 1814. Although legally the Norwegian king inherited the Danish throne in 1380, the Danish half of the empire dominated the relationship very quickly, so that Norway's role was increasingly marginalized, while political power in Copenhagen concentrated, finally established with the introduction of absolutism in 1660/65.

In 970 the Danish King Harald Blauzahn was able to assert his rule over Norway and annexed the eastern part of the country to Denmark. In 995 Norway received a native king again, Olav I. Tryggvason .

In 1035 the Faroe Islands fell under the Norwegian crown. Greenland was acquired in 1261, and Iceland was incorporated in 1262/64 . In 1319 the Norwegian crown fell to the King of Sweden and until 1355 Norway was in personal union with Sweden.

Margaret I , the daughter of the Danish king Waldemar IV. Atterdag , was with the Norwegian king Håkon VI. married. When her father died in 1375 and left no son, she used diplomatic skills in the Danish Imperial Council, with the help of her advisor Henning Podebusk , to ensure that her underage son Olav could take over the throne. She herself took over the reign for him.

Her husband Håkon died in 1380 and Olav became heir to the Norwegian throne. Margarethe got the guardianship again and was de facto queen of both kingdoms. In 1387 Olav died very young, and formally her reign would have come to an end. Nevertheless, Margarethe was able to assert her claim to power in front of both imperial councils: in 1388 she succeeded in placing her great-nephew Erich von Pommern opposite the Norwegian imperial council as heir to the throne. Norway also became a hereditary monarchy - in contrast to Denmark, whose imperial council also paid homage to Erich. Margarethe remained regent of both empires until her death.

In 1397 Margarethe also succeeded in uniting her double empire with Sweden in the so-called Kalmar Union . After her death, Erich, the designated heir to the throne, took over all three northern kingdoms, although the relationship with the Swedish Imperial Council remained problematic, as he reserved the right to vote for the Swedish king in the Treaty of the Kalmar Union.

In 1523 Sweden left the Union under Gustav Wasa . Norway and its North Atlantic possessions remained with Denmark.

While the enmity between Denmark and Sweden subsequently led to further armed conflicts, Norway was in 1536 by Christian III. declared part of Denmark and the Norwegian Imperial Council dissolved. The personal union thereby took on more of the features of a real union . To what extent the formal interventions led to an effective subordination of Norway is still discussed in research today.

The real loss of importance was accelerated by the plague , which decimated the Norwegian nobility so much that Danish nobles had to and could fill this gap.

Norway was never dissolved as a kingdom, the king dubbed himself “King of Denmark and Norway”, and there were different framework laws for Denmark and Norway. The king was represented by an imperial governor or vice governor in Norway.

Norway moves to the union with Sweden

In the Peace of Kiel on January 14, 1814, the Swedish Crown Prince Karl Johann (the former French Marshal Jean-Baptiste Bernadotte) succeeded in having Denmark cede Norway to Sweden. The text of the treaty expressly stated that the King of Sweden received the Norwegian crown, in other words that no confederation would be formed. However, Karl Johann had to accept the newly enacted Norwegian constitution. At the Congress of Vienna , the regulations were confirmed. For Sweden it was compensation for the loss of Finland to Russia , while Denmark received the Duchy of Lauenburg as compensation . The old Norwegian possessions of Greenland , Iceland and the Faroe Islands remained with Denmark.

On February 27, 1814 Norway proclaimed its independence. Christian Friedrich (who became King of Denmark in 1839), who was elected King of Norway on May 17, 1814 , had to renounce the throne on October 10, 1814 under Swedish pressure and agree to the union of Norway with Sweden. Only in 1905 could the Norwegian Storting initiate the dissolution of the union with Sweden. After a referendum for independence, Sweden agreed to dissolve the union.

From a Norwegian perspective, from the 19th century onwards, the personal union was not viewed as a confederation , but as an external determination. In the spirit of Norwegian national romanticism, Henrik Ibsen described the era as "the 400-year-old night" ( 400-års-natten ) of Denmark's cultural, political and economic dominance over the neighboring people of equal size.

From a Danish perspective, the Union offered the advantage of being able to guarantee the position of power in Northern Europe, especially against arch-rival Sweden . Sweden's access to the Kattegat was limited to a 15 km narrow corridor until the middle of the 17th century, which remained militarily vulnerable despite the fortress Älvsborg . All European trading powers had to sail through the Danish-controlled Oresund to reach the Baltic Sea, paying the sound tariff.