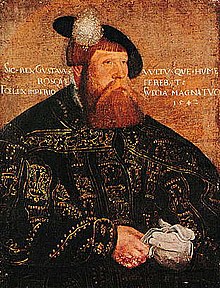 Signature of Gustav I. Wasa

He introduced the hereditary succession to the throne and freed Sweden from the rule of the Danish king, which is why June 6, the day of his election, became the Swedish national holiday . He did not get the name Gustav Wasa until the 17th century; during his lifetime he was known as Gustaf Eriksson and King Jösta . He is buried in the Vasa Crypt in Uppsala Cathedral.

Gustav I of the Wasa family was born on May 12, 1496 in Lindholmen, according to other sources on May 3, 1497 at Rydboholm Castle as the eldest son of Erik Johansson (Vasa) and his wife Cecilia Månsdotter (Eka). During this time (since 1397) Sweden was a member of the Kalmar Union , which was ruled by the Danish kings. However, there were strong independence movements in Sweden, which led to kings being deposed and Sweden being ruled temporarily by imperial administrators . Gustav spent a large part of his childhood with his sister Margaret in Rydboholm Castle. When he was 13 years old, he went to Uppsala and first attended school and then university , where he learned among other things Latin and German . There he spent about four years and then he was sent to the court of Sten Stures the Younger , the administrator of the Swedish Empire. Here Gustav was taught the court rules of professional conduct and fencing, and he was trained as an officer.

He participated early on in the battles of Sten Sture against the Danish King Christian II , who was also the ruler of the Kalmar Union and thus Sweden. Gustav was the standard bearer in the battle of Brännkyrka won by the Swedes in 1518. Gustav was also one of the six people who were to initiate negotiations with King Christian after this battle. Instead of negotiating, Christian took all six hostage and sailed back to Denmark. They were held captive on the small island of Kalø , northeast of Aarhus in Jutland. Christian II tried to persuade the prisoners to change sides, but only two hostages accepted this offer. Gustav, who remained loyal to Sten Sture, managed to escape to Lübeck in September 1519 . At first he found shelter with Swedish merchants like Cordt König and Marcus Helmstede and met with Harmen Iserhel. He arranged the contact to the Lübeck mayor Nikolaus Brömse . The Lübeck council protected him from an extradition request from the Danish king and after eight months he was able to return to Sweden cloaked and secretly. In addition to Harmen Iserhel, who equipped privateers for his fight against Christian II, his most important supporters were the arms dealer Cord König, who made contact with the skipper Hinrich Möller, who dared the dangerous crossing to Kalmar at the end of May 1520. In the meantime, King Christian had defeated Sten Sture in the Battle of Bogesund on Lake Åsunden, and Sweden was on the way to completely losing its relative autonomy to Christian II.

Fight against Christian of Denmark

The first of a series of five pictures showing Gustav Vasa's victories; it depicts the events surrounding the siege of Stockholm in 1521.

Gustav arrived on May 31, 1520 with the ship Rabe of the Lübeck shipper Hinrich Möller near Kalmar in Sweden. He was also received in a friendly manner in Kalmar Castle by the local commander, Anna Eriksdotter ( Bielke ), but immediately there he felt the lack of will among the nobles and townspeople to fight against the new ruler. He experienced the same thing on his way through Småland and Östergötland towards central Sweden.

When he got to his brother-in-law Joakim Brahe's in Södermanland , Gustav learned that Stockholm King Christian had now also joined. Joakim wanted to go to Stockholm to take part in the coronation celebrations, and Gustav warned him against this trip in vain. Christian II's coronation as King of Sweden was followed by the execution of many high-ranking Swedish aristocrats on charges of heresy in what is known as the Stockholm Carnage . Among them were Joakim Brahe and Gustav Wasa's father Erik Johansson (Vasa) and two of Gustav's uncles.

Gustav had meanwhile gone to Dalarna , where he hoped to meet experienced fighters who would join a revolt. When he arrived in November 1520, they were undecided and he had to continue his flight towards the Norwegian border. When the news of the Stockholm bloodbath reached Mora shortly afterwards , the sovereigns changed their attitude and sent their two best skiers on their way to bring Gustav back.

Near halls they reached him, and reported on the changed situation - to commemorate this event which takes place since 1922 Vasaloppet instead. The uprising was now gradually spreading southwards. In Kopparberg to 1,000 miners joined. At the end of April 1521 Gustav Wasa was master of Dalarna , Gästrikland , Västmanland and Närke . In June he stood with his peasant army before Stockholm, but storming the city was out of the question.

In the second half of August 1521 Gustav was elected "Reichsvorsteher". The fortified castles and towns remained in Danish hands, as Gustav lacked the people and siege material fit for war. He also lacked the necessary equipment to attack fortresses by the sea. As an opponent he faced the commander of the Danish fleet and liege of Gotland Søren Norby on Visborg . He was only able to conquer Kalmar and Öland in 1522 after suitable ships had come to his aid from Lübeck under the leadership of councilor Hermann Plönnies . On midsummer day 1523 Gustav could celebrate his entry into Stockholm and in October of the same year the last fortresses except Visborg fell into his hands.

Gustav Wasa was elected king on June 6, 1523 at the Swedish Diet in Strängnäs near Strängnäs Cathedral . Shortly afterwards, all Danish troops were driven out of the country. The coronation as king took place on January 12, 1528 in Uppsala Cathedral .

The Swedish Empire suffered from heavy debts and Gustav I looked for ways to improve its financial situation. For this he awarded, among other things, a fishing monopoly to the Gävle fishermen . In the Diet of Västerås in 1527 it was decided that a large part of the previous church income should now go to the royal family. At the same time, Gustav Wasa was appointed head of the Swedish Church in place of the Pope. The first steps towards the Reformation were also initiated, which led to the separation from the Catholic Church in the 1530s. The confiscation of ecclesiastical goods, which made up about a fifth of the entire property, led to a strengthening of the royal finances. At the same time, the basis for a central administration was laid, which was modernized in the years 1538–1542 based on foreign models, and the tax system was also reorganized. Other important steps on the way to centralization were the Diet of Västerås in 1544, when the elective kingship was replaced by the hereditary kingship .

Gustav Wasa's empire was primarily a peasant empire. Only five percent of the population lived in cities. The Dalarna uprisings of the peasantry in Gustav's first years of reign were directed primarily against the high taxes that were levied to satisfy foreign creditors. This generated resistance among the peasants, which was reflected in the Dacke uprising in 1542 .

Gustav also fought against the privileges of the German Hanseatic League . These had been given to the Lübeckers in return for their support in the fight against Denmark, but led to Sweden's economic dependence. Gustav supported the struggle of his brother-in-law, the new Danish king Christian III. , against the Hanseatic League, which led to the complete independence of the Swedish ports. After this successful collaboration between the two Scandinavian empires, the old mistrust strengthened again and Gustav even feared a new war. In the last years of its reign, Sweden waged a war against Russia (1554–1557). However, this war did not result in any change in the course of the borders.

Gustav Wasa was the founder of one of the first orchestras of modern times, the Royal Court Orchestra . Royal household books from 1526 mention 12 musicians, including wind instruments and a timpani , but no strings . The Kungliga Hovkapellet is now the orchestra of the Royal Swedish National Opera and is one of the oldest orchestras in Europe.

On October 1, 1536, he married Margareta Eriksdotter Leijonhufvud (January 1, 1516 - August 26, 1551), daughter of Erik Abrahamsson Leijonhufvud and his wife Ebba Eriksdotter , who gave him ten children, two of whom were boys died while their parents were alive:

In his third and last marriage, the king married on August 22, 1552 Katharina Stenbock (* July 22, 1535 - December 13, 1621), daughter of the Imperial Councilor Gustav Olofsson and Brita Eriksdotter Leijonhufvud, the sister of his second wife. The marriage remained childless. Katharina survived the king by 61 years.