The name of the province refers to its location south of Lake Mälaren .

Södermanland is a flat land that nowhere rises more than 200 meters above sea level. The landscape is littered with many wooded hills that tower over depressions in which there are lakes, peat moss or loamy plains. The only larger plain in Södermanland lies south of Lake Hjälmaren. This typical landscape was formed by several faults and the force of the local rivers. In the case of the fracture zones, it was usually the case that the area north of the fracture subsided, while the southern part remained at the same height. Sometimes arisen clumps , as in the central region Södermanland, with the lakes Hjälmaren and Mälaren on one side and the Baltic Sea on the other side where the ridge forms a watershed.

In the bordering Baltic Sea there are countless islands that form the southern part of the Stockholm archipelago .

The first postglacial people probably settled here during the Mesolithic . A few axes have been found from this period. The immigration seems to have originated from Östergötland and Närke . First the higher and middle parts of the landscape and later also the areas around Lake Mälaren and the Baltic Sea were settled.

There are plenty of finds from the younger Stone Age and the Bronze Age is also represented. In total, more than 96,000 objects from the epochs mentioned have been excavated. Cultural centers of the Bronze Age were located at Lake Yngaren west of Nyköping and in what is now the municipality of Södertälje .

At the end of the Bronze Age the climate deteriorated and therefore few finds are known from the beginning of the Germanic Iron Age . Larger gold treasures could be found from around 500 AD. This also included the treasure weighing over 12 kilograms, which was found in 1774 near Tureholm in the municipality of Ekerö . This represented the largest gold discovery ever made in Sweden.

Södermanland is rich in burial mounds, stone settings and castle ruins. In terms of the number of rune stones , it is only surpassed by Uppland . The oldest stone, the Skåäng rune stone , is located at Vagnhärad and has an older inscription from around 500 AD and an additional newer inscription. The Ramsund engraving is also important, as it shows that the Sigurd saga was known in Sweden. On other stones reports are given about the voyages of the Vikings and the treasures they captured or the trade carried out. 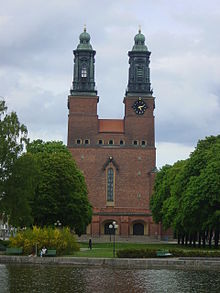 The missionaries of Christianity initially focused on the northwestern part of the landscape. Here the division into socks took place around the middle of the 11th century. The monk Eskil became known who set up a bishopric in Tuna (today: Eskilstuna ). The transition to Christianity was slow and Ting meetings were held in Strängnäs as late as the end of the 14th century . The landscape had its own law, Sudermanna lagbok , which was established in 1327. Södertälje , which was already mentioned by Adam von Bremen , and later especially Nyköping , became important as trading centers and fortifications .

Little is known about early political history. From the statements in existing legends, one can conclude that various small kingdoms existed. More details are only known for the time of the Folkung people . During this period the dukes of the Folkung family received Södermanland as a fief. In the 14th century, large areas of Södermanland belonged to the Imperial Councilor Bo Jonsson from the Grip family. He also made the symbol of his gender, the griffin , the coat of arms of the landscape.

Most of the fighting of the Kalmar Union was fought in Södermanland. Charles VIII was attacked by Christian I in Strängnäs in 1457 and robbed of his title, in 1467 Karl was able to regain his throne in a battle with Julita Nahe Katrineholm , in 1518 Sten Sture the Younger won against Christian II at Brännkyrka and finally Gustav Wasa became in 1523 Strängnäs elected king. Gustav Wasa's sons promoted rapid development of the landscape. Castles were rebuilt and expanded, and trade, mining, agriculture and other branches of industry were promoted. In the entire 17th century Södermanland was spared from wars and even after that there was only one enemy attack: in 1719 Russian troops invaded from the Baltic Sea and set fire to several cities (e.g. Södertälje), villages and castles. With the Swedish victory in the sea battle at Baggensstäket Bay near Saltsjöbaden , the attackers were repulsed before they could reach Stockholm.

In April 2016, King Carl XVI. Gustaf the first son of Prince Carl Phillip and Princess Sofia (Prince Alexander) to the Duke of Södermanland.