Östergötland is a historical province ( Swedish landskap ) in Sweden . It borders in the south on the historic province of Småland , in the west on Västergötland , in the north on Närke and Södermanland and in the east on the Baltic Sea .

Östergötland is part of the southern Swedish highlands and the central Swedish depression. In the center of the province is the Östgöta plain, which extends from east to west and is a region of great economic importance. To the north of the Östgöta plain lies a fault zone with steeply rising hills that gently descend to the north, and deeply cut lakes and valleys. The foothills of the southern Swedish highlands, a hilly landscape with numerous lakes, extend south of the plain. A fourth landscape form is the coast and the numerous archipelago, which are the remains of glacial moraines. Östergötland's largest river is the Motala ström , which drains Lake Vättern through several lakes into the Baltic Sea.

On the Baltic coast of Östergötland there are many islands that form an archipelago . The coast is surrounded by bays that go deep into the country, such as B. Bråviken in the north, Gröpviken and Slätbaken further south or Valdemarsviken on the border with Småland . The Vikbolandet peninsula, about 600 km² in size, lies between Bråviken and Slätbaken. The coast to Vättern is high and steep in the south and flatter and shallower to the north. There are no islands near the beach, but these are, such as B. Jungfrun, Illegrundet, Fjuk, further into the lake. In the far north is the island of Röknehufvud, which is separated by a narrow strait from the island of Stora Röknen, which belongs to the province of Närke .

Östergötland has a mild climate for this geographical latitude with an annual rainfall of 500–600 mm and an average temperature of −2 ° C in January and 16 ° C in July.

Östergötland is one of the most important agricultural areas in Sweden. Agriculture - strongly rationalized - still plays an important role in the economic life of the province. The industrial development was diverse, the cities of Linköping (aircraft and armaments industry, food industry), Norrköping (including Ericsson ), Finspång (metal processing industry) and Motala have developed into industrial centers. 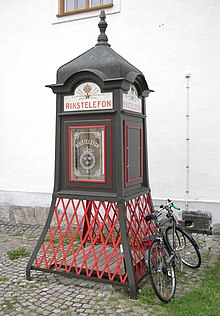 The graves, most of which are located in the 1740 grave fields of the province, give evidence of the oldest history. The oldest settlement can be traced mainly on the coast and in the Östgöta plain between the coast and Lake Vättern . The burial mounds around Lake Takern and around 280 rock carvings with over 3500 figures date from the Bronze Age, most of which are located on the Motala River, especially near Norrköping. Rich treasure and grave finds give a picture of the cultural development from the birth of Christ, rune stones, such as B. the famous Rök stone, complete the picture.

Östergötland already played an important role at the beginning of the Empire's formation in the High Middle Ages; two royal families, the Sverker and the Folkung , came from the region. They worked closely with the Church. At the beginning of the 12th century Linköping became the bishopric of a newly formed diocese that included Östergötland, Småland , Gotland and Öland . The first monastery in Sweden was founded in Alvastra in the middle of the 12th century, and with the establishment of the Order of Birgitta and its ancestral monastery in Vadstena in the 14th century, a new spiritual center emerged. The church also played an important role in politics. In the Middle Ages, Östergötland was both politically and culturally relatively independent. It had its own law ( Östgötalagen ), its own thing and its own legal scholars ( lagman ). These came from the leading noble families and often held key political positions in the empire.

At the beginning of the 16th century the nobility and the church dominated, but with Gustav Vasa taking office and the subsequent Reformation and the confiscation of ecclesiastical property, the kingship gained power. This led to revolts in 1542–43, and in 1544 construction of a castle in Vadstena began to pacify the region. This also made Vadstena an important administrative center. It was not until 1719 that Östergötland became a unified province ( Östergötlands län ). The province was also famous for the light cavalry and infantry troops that Gustav Adolf of Sweden deployed during the Thirty Years' War . Iron and copper finds led to the establishment of a metal processing industry in the 17th century. At the end of the 17th century and the beginning of the 18th century, the textile industry developed, which was concentrated around Norrköping . The construction of the Göta Canal , the main railway line Stockholm - Helsingborg and other railway lines led to an industrial boom in the region. Industrial development continued in the 20th century (the proportion of employees in the secondary sector is well above the realm), with Linköping becoming the most important industrial city.

In 2012, Östergotland became the titular duchy of Hereditary Princess Estelle of Sweden .

In the west the province borders on Lake Vättern . There are a number of sights along the 150 km long coastline: in Vadstena , a spiritual and administrative center from the 14th to the 17th century, there is the Birgittenkloster, the mighty castle and an intact old town. Vadstena is still a spiritual center of Sweden today. To the north is Motala , which was created in connection with the construction of the Göta Canal. South of Vadstena is the Omberg, a nature reserve with the ruins of the oldest Swedish monastery, Alvastra, on the flank. Not far from there is Sweden's most famous rune stone, the Rök stone.

Linköping , Norrköping and Söderköping are three cities worth seeing. Linköping has been the center of Östergötland, a bishopric, royal seat and school town since the Middle Ages. Worth seeing are the cathedral and the neighboring district, the large open-air museum, in which more than 50 wooden houses from the 18th and 19th centuries form a small district, and the provincial museum and the aviation museum. Norrköping is worth a visit, especially for those interested in industrial history. At Norrköping there are hundreds of rock drawings from the Bronze Age with pictures of sun wheels, axes, ships, etc. a. Söderköping was one of the most important trading and port cities in Östergötland in the Middle Ages. But it has remained a small town and has retained a lot of its charm.

A number of important noble families lived in Östergötland. They have also built numerous castles, including Bjärka-Säby , Ekenäs , Finspång, Löfstad , Sturefors and Stegeborg , all of which are worth a visit.

Last but not least, the coastal landscape with its numerous archipelago should be pointed out here.