The title of this article is ambiguous. Further meanings are listed under cornflower (disambiguation) .

The cornflower ( Cyanus segetum Hill , Syn .: Centaurea cyanus L. ), also Zyane called, is a species of the genus Cyanus within the family of the daisy family (Asteraceae). 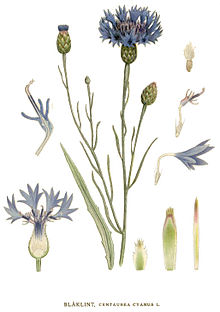 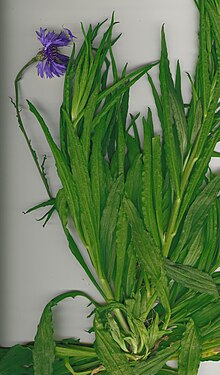 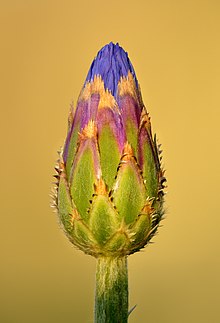 The bracts are easily recognizable when they are in bud

Flower head in detail, the bracts are clearly visible from the side

The cornflower is an annual , herbaceous plant that reaches heights of 20 to 100 centimeters. The upright, simple stem , branching up to the top, is loosely tomentose.

The alternately arranged leaves are more or less loosely hairy gray tomentose. With a length of 3 to 10 centimeters, the leaf blade of the lowest stem leaves is linear-lanceolate with a pointed upper end or sometimes pinnate. Their leaf margin is simple or has remotely linear leaf lobes. The remaining stem leaves are linear and mostly with entire margins; mostly they are not significantly smaller towards the top, except for those directly below the inflorescences.

In an open, rounded to more or less flattened zymous total inflorescence, the cup-shaped inflorescences stand above the inflorescence shafts . The involucre is bell-shaped at a height of 12 to 16 millimeters. The initially filzig hairy and then verkahlenden bracts are trockenhäutig at the edge and on the upright appendages, dark brown to black, with the long teeth are about 1 millimeter fringed. The outer bracts are close and are green in color and egg-shaped. The inner bracts are looser, purple and elongated. The flat bottom of the cup has no chaff leaves . The disc-shaped flower heads contain 25 to 35 tubular flowers .

The straw-colored or silver-gray, finely haired achenes are 4 to 5 millimeters long. The pappus consists of unequal, stiff bristles, which are usually shorter than the achenes with a length of 1 to 4 millimeters.

Bumblebees on a variety of cornflowers

In terms of flower ecology, it is the "cup flower type". The flower crowns get their blue color from anthocyanidin and the very sensitive cyanidin . The latter color is actually red, but appears blue due to an iron-magnesium-calcium complex. The petals fluoresce under ultraviolet radiation and are therefore noticeable from afar. The tubular flowers at the edge are enlarged as show flowers , they are radiant deep blue and sterile . The filaments are easily irritable: In a touch they are caused by a sudden negative pressure cell ( loss of turgor relaxed), knee flex characterized shaped outwardly and pull the dust bag ring down. The stationary stylus then pushes the inwardly emptied pollen out of the dust bag tube according to the " lamp cleaner principle". The stamens are irritable again after just one minute. The pollinators are for example hymenoptera , hoverflies and butterflies . The maximum visit from bees takes place in the morning around 11 a.m. The blooming period extends from June to October (overwintering specimens bloom as early as May).

The achenes have a basal oil body ; this is used to spread through ants ( myrmechory ). The hair of the pappus is hygroscopic and therefore spreads apart when dry. As a result, they can be subject to wind propagation; but it can also lead to self-propagation are the achenes: When "Bodenkriecher" or by entering a "Bohrfrucht" into the ground. In addition, it spreads randomly through humans with seeds . The fruit ripens between July and November. The long-lived seeds contain up to 28% fatty oil.

The cornflower is attacked by the rust fungus Puccinia cyani with spermogonia , uredia and telia .

Cornflowers as a weed in a rapeseed field

The wide archaeophytic distribution area of Centaurea cyanus extends from Finland and Belgium via Luxembourg to Germany and Hungary to the Czech Republic, Slovenia, Serbia, Croatia, Bosnia and Herzegovina, Bulgaria, Montenegro, Albania, Moldova, Macedonia and Greece and from the Baltic republics via Belarus , Poland, Ciscaucasia, Georgia, Armenia to Azerbaijan and from Turkey to northern Iraq and from Spain (including the Balearic Islands) via Portugal and France to Italy (including Sardinia, Sicily).

The cornflower is not one of the plants originally native to Central Europe . It has been proven as a cultural successor since the Neolithic , originally it comes from the eastern Mediterranean region. It was probably introduced unconsciously with seeds from the Mediterranean region (so-called Speirochoria ) and is therefore one of the hemerochoric plants. Since man has been farming , the cornflower has been a constant companion of grain fields . It is a species of character of the order Centauretalia cyani.

In many areas of the world, Cyanus segetum is a neophyte .

Its frequent occurrence on the edge of cornfields gave it its common name in the Middle Ages. However, the cornflower can also be found in places in rubbish areas and quite dry locations, although in the latter places it can usually be found together with chamomile and poppy . For a long time it had become rare due to over-fertilization of the fields. It is a bio-indicator that shows how much the fields have been fertilized in previous years. Nowadays it is more common again.

Due to its striking light blue (cyan) flowers, it received the common name Zyane and the specific epithet . The German common name cornflower has been proven since the 15th century and refers to the fact that it is a cereal weed.

Hippocrates , the famous Greek doctor , used the name for blue-flowered species, probably the gentian family. It is derived from Kentaureios = "belonging to the Centaurs". Carl von Linné transferred this name Centaurea to the genus. It is possibly derived from the Centaur Chiron , who is said to have healed a wound at the foot of the hero Achilles . Ceres , the Roman goddess of harvest , wore the cornflower in her hair .

Although the cornflower has not been shown to have any direct healing properties, it is often used against inflammation , skin reddening and conjunctival irritation. It is seldom a component of cosmetics .

In beekeeping , the cornflower is a valued sideline due to the high sugar content of its nectar (34%) and its high sugar value (up to 0.20 mg sugar / day per flower) .

In teas, dried cornflower blossoms are used as a decorative drug , for example in the mixture Lady Gray .

Some varieties are used as an ornamental plant.

In the Middle Ages, the cornflower was important as a Marian flower, it can be found on Gothic winged images and other images. Around 1800 the cornflower experienced a fundamental change in meaning in Germany . From a dreaded field weed it changed into a symbol of a new naturalness and with the creation of myths about Queen Luise, who died young in 1810, it became a “Prussian flower”. The decisive impetus for the cornflower cult of the 19th century was given by Luise's son - who later became Kaiser Wilhelm I  - who, in memory of his childhood, declared the “Prussian blue” cornflower his favorite flower. Wilhelm's preference is said to go back to his daughter Luise , who decorated her father's study with bouquets and wreaths. Prussian blue here refers to the color of the uniform skirts.

As a political symbol, the cornflower found little use in Germany (in contrast to Austria). Around 1910, Cornflower Days came up when young girls sold (paper) cornflowers for the benefit of needy veterans.

The youth organization Fahrende Gesellen , which was founded in 1909 and belongs to the völkisch - anti-Semitic German National Handicrafts Association , used the cornflower as a federal symbol, with reference to the Austrian Schönerer movement. The Association of Die Fahrenden Gesellen, re-established in 1948 . The Association for German Life and Hiking has the cornflower in its badge as a symbol of continuity.

The Association for Germanness Abroad (VDA) has been using the cornflower in its symbolism since the mid-1920s . In 1933 it became the official symbol of the VDA, which is now oriented towards Greater German , and which in its magazine described it as a “traditional symbol of protection work” and “symbol of the struggle for people”. The VDA , which has since been renamed the Association for German Cultural Relations Abroad , still uses the cornflower as a logo in a strongly stylized form .

In November 2018, the Berlin MP of the AfD Andreas Wild appeared at the commemoration in the House of Representatives on the 80th anniversary of the Reichspogromnacht and afterwards at the Holocaust memorial with a blue cornflower on the lapel of his jacket, which made many of those present felt provoked. Wild told Bild that wearing the flower was "not intended". On November 29, 2018, he still wore a cornflower at a meeting of the Berlin House of Representatives, which he only removed after the second call to order . The AfD politician André Poggenburg decorated his Twitter account with cornflowers and provided the logo of the party he announced in January 2019 to found the German Patriots Awakening with the symbol.

The cornflower was used by the population to decorate clothes and houses during the regular spa stays of the German Emperor Wilhelm I in Austria-Hungary . As a result, the prices of the flower rose significantly and artificial flowers had to be used.

Badge of the Pan-German Association "Schönerer"

At the constituent meetings of the Austrian National Council between 2006 and 2013, the MPs of the FPÖ wore the cornflower in addition to the usual white and red bow. The FPÖ mandataries wore it as a symbol for the Third Camp and the freedom movement of 1848, in whose tradition the FPÖ sees itself. This explanation has been questioned by historians like Lothar Höbelt and Oliver Rathkolb , who could not find any evidence that the cornflower was the symbol of the freedom movement of 1848. Rathkolb saw it as a sign of the anti-Semitic Schönerer movement. Norbert Hofer (FPÖ) advised FPÖ politicians in 2016 not to use the cornflower in order to avoid the need for explanation. At the constituent meeting on November 9, 2017, the MPs then wore the alpine flower edelweiss .

The logo of the American Steuben Parade.

In the United States the cornflower (will cornflower ) the annual as the official symbol Steuben Parade used with the German-Americans want to remember their roots.

The Liberal Party of Belgium used from 1878 cornflower reason assigned by the electoral law blue color as a symbol of the party.

In Sweden the cornflower is the landscape flower of Östergötland , the symbol of the suffrage movement of the late 19th century and today the party symbol of the Liberals party . Similar party symbols have their sister parties in Åland and Finland .

The cornflower has been the national flower of Estonia since 1968 . It is also a symbol of the Estonian Conservative People's Party - EKRE .

In France , the Bleuet de France (“Cornflower of France”) is a symbol of memory of the countless victims of the war, especially those of the two world wars. The porters show their solidarity with veterans, widows and orphans.

In Russia , the art scene features a wreath of blue cornflowers for Fyodor Basmanov , the alleged lover of Tsar Ivan the Terrible.

A stylized cornflower is the logo of the fashion brand Joop! .