The title of this article is ambiguous. For the novel by Penelope Fitzgerald, see The Blue Flower . 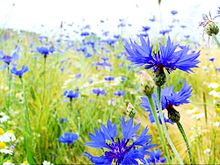 The cornflower could have been the model for the symbol

The blue flower is a central symbol of romance . It stands for longing and love and for the metaphysical striving for the infinite . The blue flower later became a symbol of longing for the distance and a symbol of wandering . Domestic plants are often seen as real models for the blue flower, such as the cornflower or the chicory in Central Europe ; Novalis speaks of the blue heliotrope .

Origin of the symbol

Inspired by a picture by his friend Friedrich Schwedenstein , Novalis was the first to use this symbol in his fragment of the novel Heinrich von Ofterdingen . It begins with young Heinrich pondering about meeting a mysterious stranger before going to sleep:

“The youth lay restless on his bed, thinking of the stranger and his stories. It is not the treasures that have aroused such an inexpressible desire in me, he said to himself; Far away from me lies all greed: but I long to see the blue flower. "

He falls asleep and begins to dream. In the dream he travels through strange areas until he finally sees the opening of a passage at the foot of a mountain. He enters a cave in which there is a pool of water that he swims through to the other bank:

“What attracted him with full power was a tall, light blue flower that [...] touched him with its broad, shiny leaves. All around them were innumerable flowers of all colors, and the delicious smell filled the air. He saw nothing but the blue flower, and gazed at it for a long time with indescribable tenderness. At last he wanted to approach her when she suddenly began to move and change; the leaves became shinier and clung to the growing stalk, the flower leaned towards him, and the petals showed a blue, spread out collar in which a delicate face floated. His sweet astonishment grew with the strange transformation when his mother's voice suddenly woke him [...] "

In summary, one could say that the blue flower not only connects nature , man and spirit , it symbolizes the striving for knowledge of nature and - as a result - of the self , the actual goal of romanticism.

Nature and humans combine what you see first of all that in Henry's dream in the middle of the flower (nature) appears the girl's face - which will also to love and woman / woman is to think in general not only to the people. In Romanticism, “human” means the continuation of the human concept of humanism or the Enlightenment - only with romantic omens, whereby the emphasis is on personal feelings, not on abstract theory. It is not for nothing that thinking as a theoretical concept in romanticism is based on personal love. This is what is meant when one says that the blue flower symbolizes "the pursuit of the knowledge [...] of the self". The emphasis is on individualism. The self embodies the feeling, the thinking of the individual, the ego - whereby the self is named here as the result of its own cognitive process. So the self is everything in one: first: the one who thinks about himself, second: the one who feels, and whose feelings / thoughts are thought about, and third: the result of the reflection, namely a kind of higher I, a higher self , what was recognized. The concept of knowing leads back to love. As a result, knowledge of nature takes place by experiencing love in all its manifestations. Then one recognizes nature and - as a result - also one's self. These are the basic ideas of romance that are summarized in the symbol of the blue flower.

Use of the symbol

Joseph Freiherr von Eichendorff wrote a poem entitled The Blue Flower . Adelbert von Chamisso said he had found the “blue flower of romanticism” in the Harz Mountains, Heinrich Zschokke used it as a symbol of longing and love in the novella Der Freihof von Aarau . Above all, Goethe was looking for his “ original plant ” in Italy , which corresponds to the blue flower in some areas of interpretation. In Wilhelm Müller's poem Rain of Tears from the cycle Die Schöne Müllerin , which Franz Schubert set to music, blue flowers are mentioned. ETA Hoffmann pays homage to Novalis and the blue flower as a symbol of the “sacred miracle of nature” in the mouth of the figure Berganza in his story, News from the latest fate of the dog Berganza .

The naturalist Karl Henckell mocks the blue flower in the poem of the same name as a “romantic plant of lies”. Hertha Vogel-Voll used the blue flower in her art fairy tale The Silver Bridge as an element that gives the fairy tale (as a character) its magical power. In a modified form, Captain Blaubär's inventor Walter Moers also uses this classic symbol of longing in his love and adventure novel Rumo & Die Wunder im Dunkeln to illustrate the still undefined, but nevertheless strong love of his hero: The blue flower becomes the "Silver thread". 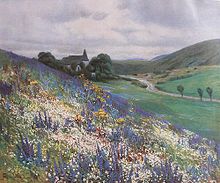 The important early romantic painter Philipp Otto Runge (1777–1810) used the motif of the blue flower in several paintings. Runge had dealt with the work of Novalis when he created two versions of a romantic symbolic image on the theme of the morning in 1808 and 1809 . In both versions, a calyx can be seen in front of the night sky, which symbolizes the longing for fulfillment and love.

The Düsseldorf landscape painter Fritz von Wille (1860–1941) painted a view of the chapel on Totenmaar in the Eifel in 1906/1907 with a slope full of blue and white flowers in the foreground. The picture was given the title The Blue Flower , was acquired by Kaiser Wilhelm II in 1908 and continues to contribute to the painter's prestige to this day. Wille probably chose the title under the impression of neo-romanticism at the beginning of the 20th century.

In 1960 Werner Helwig published his book The Blue Flower of the Wandering Bird on the history of the youth movement for the first time . In this context, various songs were created that took up the symbol. A contemporary movement that takes up this motif again and reinterprets it is the community of the Blue Flower eV

Quote from the song We want to go ashore , text by Hjalmar Kutzleb :

“In the forest deep within, the blue flower blooms fine,
to win the flower we draw into the world.
The trees rustle, the river murmurs,
and if you want to find the blue flower, you have to be a wanderer. "

In Berlin around 1968 the slogan came up as part of the student movement : "Kill German studies , turn the blue flower red!" The blue flower stood pars pro toto for German literature as an object of German studies, which is denounced as "frozen science" should.

In Friedrichshafen , an alternative association is organizing a residential and cultural project called “The Blue Flower”. It became known in the media because the city administration wanted to ban the associated housing project.

In the fantasy novel Die Legenden Lýsistratas - In search of the blue flower , published by Tanja Steinborn in 2016, the protagonists search for the blue flower, which has its origin in a fairy tale . The blue flower is a symbol of hope; the search and journey itself awakens the main characters longing for distance and adventure.