Carl XVI. Gustaf (born April 30, 1946 at Haga Castle near Stockholm ; full name Carl Gustaf Folke Hubertus ) is the head of the Swedish royal family Bernadotte and has been King of Sweden since September 15, 1973 . Since August 2016 he has been the longest reigning king since Sweden existed as an independent kingdom; since April 2018 also the longest reigning king in Swedish history.

Carl Gustaf is the youngest child and only son of the Duke of Västerbotten Gustav Adolf Hereditary Prince of Sweden (1906-1947) and his German wife Princess Sibylla (1908-1972), the eldest daughter of the last reigning Duke of Saxe-Coburg and Gotha , Carl Eduard and Princess Viktoria Adelheid of Schleswig-Holstein-Sonderburg-Glücksburg , a niece of the last German Emperor and King of Prussia Wilhelm II . 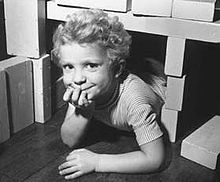 His father was killed in a plane crash in Denmark in 1947 when Carl Gustaf was just under nine months old. Since then he has stood after his grandfather, the then Crown Prince and later King Gustav VI. Adolf , second in line to the throne. In 1950 his grandfather became king and he himself crown prince. As a boy he had little taste for the role. According to an old custom, a kindergarten was set up for the Crown Prince in the castle, but afterwards he was sent to public schools, where he was treated like the other students. After graduating from high school in 1966, he signed up for the fleet as an officer candidate with the number 001 and went on a long voyage around the world for almost half a year on board a mine layer . After the Navy, the Army and Air Force took over his further training. In the end he was an ensign four times : in the fleet, in the Jämtland Feldjäger Regiment , in the Reich Body Guard and in the Air Force. He attended the Universities of Uppsala and Stockholm , where he studied economics , political science , sociology and history . 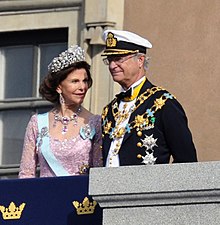 Carl XVI. Gustaf and Silvia of Sweden on the wedding day of Crown Princess Victoria

After the death of his grandfather, Carl XVI. Gustaf enthroned in 1973.

On March 12, 1976, the official engagement took place with Silvia Sommerlath , whom he had met at the 1972 Summer Olympics in Munich , where she had worked as head hostess . On June 19, 1976, a glamorous wedding followed in the Storkyrkan , the Stockholm cathedral. The day before the wedding, the song "Dancing Queen" by the pop group ABBA premiered in a program in honor of the bride and groom on Swedish television.

The royal couple belong to the Evangelical Lutheran Church of Sweden . The marriage had three children:

The king and his family live in the Drottningholm and Solliden castles .

With a reform of the Act of Succession to the Throne, which came into force on January 1, 1980, Carl XVI. Gustaf set as the new exit to the throne . Only his descendants can inherit the Swedish throne, all other branches of the Bernadotte family are excluded. It was also determined that the firstborn would inherit the throne regardless of gender. Previously, the succession to the throne had been limited to male descendants, which is why Carl Philip was initially heir to the throne. With the change, Victoria became the Crown Princess. Carl Gustaf was very critical of the change. In 1977, during the discussion about the new regulation, he said that the job was "too difficult for a girl". Furthermore, some regulations of the old Succession Act of 1810 were changed. So the requirement of equality has been abolished. The marriage to Silvia Sommerlath was only possible without losing the throne because he was already king at that time. As crown prince he would have lost his claim to the throne.

George W. Bush, Laura Bush and the Swedish Royal Couple in front of the White House (2006)

After the reform of one of Sweden's four basic laws, the "form of government" (Swedish Regeringsformen ), in 1974 the duties of the head of state are exclusively representative and ceremonial. For example, the king does not sign any laws , does not appoint the minister of state or the individual ministers, and is not in command of the armed forces . On the other hand, he opens the Swedish Reichstag every autumn with a speech of more general content (he does not give a speech from the throne ), always chairs the first session of a new government, accredits the ambassadors of other countries to Sweden and is chairman of the Advisory Council for Foreign Affairs ( Utrikesnämnden in Swedish ). On official occasions he almost always appears in an admiral's uniform with the ribbon of the Seraphim Knights .

On the occasion of his state visit to the Sultanate of Brunei on February 9, 2004, Carl Gustaf praised the dictatorial ruling sultan of his host country for his alleged closeness to the citizens. As a result, he triggered a storm of indignation in his home country, whereupon the monarch, who in any case has no political powers, publicly regretted his "inexperienced" remarks. At the end of this "affair", the Swedish government decided to provide the formal head of state with a member of the government as a "controlling" companion on trips abroad.

After the tsunami catastrophe at Christmas 2004, in which over 500 Swedish adults and children were killed, Carl Gustaf gave a moving speech in 2005 that received a lot of recognition.

Carl Gustaf is very interested in nature and nature conservation , agriculture , sports and fast cars. He is honorary chairman of the World Scout Foundation and is still an active scout himself .

He successfully participated in the Wasalauf (cross-country skiing over 89 km) three times , the last time at the age of 50. Although he is the patron of the AIK football club , he is a supporter of the Djurgårdens IF sports club . He is also a hunter . Carl Gustaf is a cousin of Queen Margrethe of Denmark . The residence of the royal family has been Drottningholm Palace since 1981 .

The program Året med kungafamiljen has been produced every year since 1977 , in which Carl Gustaf is shown both as head of state and privately as father and husband.