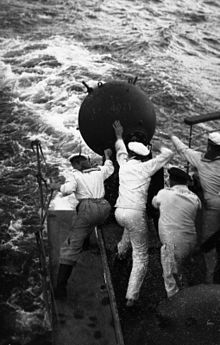 Mine-laying in the Second World War by the passenger ship converted into a mine ship, Hanseatic City of Danzig

A minelayer is a warship that specializes in laying sea ​​mines . To distinguish it from “real” mine-layers, which were specially built for this task, the Navy called former merchant ships that had been converted into auxiliary mine-layers as mine ships .

Many warships, which primarily serve other purposes, especially destroyers or speedboats , but also submarines , can also be equipped for mine-laying. In particular, anti-mine vehicles also often have the ability to lay mines.

Mine layers are also units, people or military equipment of the combat pioneers who lay land mines .

Mine laying rails on the stern of a speedboat

Mine-layers vary in size from smaller coastal boats of a few hundred tons displacement to large units of several thousand tons. They have special storage space for a large number of mines as well as special mine throwing rails, over which the mines are transported into the water. The rails can lead through special hatches in the stern or simply over the stern. Most mine layers also have self-defense weapons, mainly anti-aircraft weapons.

Even submarines , the function can take a minelayer. Examples were the USS Argonaut (SS-166) , the boats of the British Porpoise class , the French Saphir class , the German submarine classes UC , UE , VII D and XB or the Polish Wilk class . Initially, the submarines were equipped with vertical mine shafts in the hull from which the mines were "dropped". But before the beginning of the Second World War , special ground mines were developed in Germany, which were ejected from torpedo tubes with compressed air like a normal torpedo . This meant that every submarine could be used to lay mines. Modern submarines use this technology to this day.

In modern navies there are less and less specialized mine layers, as airplanes and helicopters can perform these tasks more efficiently. Countries with long, hard-to-defend coastlines such as South Korea , Norway , Sweden or Finland still use mine layers today.

Commons : Mine Layers  - Collection of images, videos and audio files