The title of this article is ambiguous. Further meanings are listed under Hunter (disambiguation) . 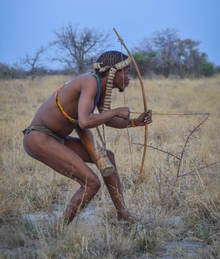 Hunter with a bow and arrow

A hunter is a person who goes on the hunt , that is, seeks out game , chases it, catches it, kills it and appropriates it.

In addition to the commonly used standard term hunter, there are various other terms, such as the traditional hunter- language term Weidmann or Waidmann , the joking terms Grünrock (in relation to the hunters as a whole: green guild ) and Nimrod as well as the colloquially outdated term hunter man .

Word origin and spelling of weid or waid

Hunting composites with weid (z. B. Weidmann, venison , Weidgerechtigkeit ) can be attributed to the Indo-European root uid * "procure food" attributed to the importance that in the course of language development to althochdeutsch weida, medium- later and High German weid was, from which the term pastureland also emerged . The ei spelling can thus be regarded as the older one from an etymological point of view, as it is the original one and makes clear the relation of the word weid to the acquisition of food.

The newer ai spelling (e.g. Waidmann, Waidwerk, Waiderechtigkeit) spread particularly through its use in the Reichsjagdgesetz (Reichsjagdgesetz) passed in 1934, where the new spelling was supposed to symbolize the new beginning associated with the introduction of the law, and is enjoyed in Germany, especially in official ones Announcements of the German Hunting Association (DJV), a certain popularity even today. The Federal Hunting Act , with Section 1 (3) (“the generally recognized principles of German grazing justice”), as well as the hunting laws of the Austrian federal states and German-speaking cantons of Switzerland, use the old ei spelling , which is more common according to Duden .

In some of the countries listed, not every type of hunting practice or every hunter generally needs a state license or the applicable regulations are ignored ( poaching ), so the data sets on the number of hunters are partly extrapolations based on representative surveys, for example in the case of Canada and the United States.

Type of service hunter in the military

In the context of the military, Jäger in German-speaking armed forces, as well as its counterparts in some other languages, stands for a " rifle- armed group of infantry primarily intended for use in scattered combat ". Hunters as a branch of the army were first set up in 1631 in the Landgraviate of Hessen-Kassel and later also in other German armies from trained professional hunters and foresters . The hunters, who already acted independently in the hunting and forestry professional life, were able to operate independently and without direct contact with the management as part of an order tactic. Recruits, often from relevant families, were usually given jobs in forestry after their service time. Due to their job, they had better shooting skills and also more pronounced skills for orientation and for using the terrain, which was an advantage in rifle combat as well as outpost and reconnaissance service .

Hunter with shouldered rifle, illustration by Otto Ubbelohde from 1909 to the fairy tale The Learned Hunter

In the homeland films of the 1950s, too , hunters often appear as noble cavaliers and thus function in a certain way as successors to knights from medieval sagas and stories. In contrast, the hunters or “hunters” are often portrayed negatively in southern German, especially Bavarian, folk tales . This is especially true for songs and stories that reflect feudal or absolutist conditions. There, the conflict between the “game shooters” ( poachers ) as identifying figures from the people and the hunters as assistants to the authorities is described. The people felt that the forest belonged to everyone; Poaching was therefore considered legitimate, but was severely persecuted by the sovereigns, who claimed hunting as a sovereign privilege. While the game shooters are portrayed as brave and caring men who share their prey with the poor, the hunters are described as cowardly, insidious and cruel. This is particularly evident in the Bavarian song by the shooter Georg Jennerwein , but the Erzgebirge poacher Karl Stülpner has also become a legend in a similar way .

However, other stories also report from a different point of view and portray the poachers as criminal and dangerous lawbreakers who spread fear and terror with their weapons and can be compared with robbers , for example the story of the Krambambuli by the well-known author Marie von Ebner-Eschenbach .

The hunter's robe is also a frequent disguise of the devil , for example in Jeremias Gotthelf's novella “ The Black Spider ”. In many versions of the legend of the Pied Piper of Hamelin , the latter kidnaps children in hunter's dress.