Poacher is a redirect to this article. For the German baroque composer see Johann Hugo von Wilderer .

Poaching refers to the unauthorized hunting and trapping of wild animals . Poachers are or were historically as hunting or wild wanton , poacher and poacher called.

Georg Jennerwein , the "Girgl von Schliers", a Bavarian poacher and folk hero of the 19th century.

Hunting poaching in Germany is a “criminal offense against property and against community values” according to Section 292 of the StGB . Codification as an independent offense in addition to theft is necessary because, according to the civil law property system, wild animals are considered ownerless and initially, as long as they are alive, cannot be owned.

Group hunting is when someone intentionally in violation of foreign hunting rights or hunting rights to the game recreates it begins or shot, or or any third party appropriates, or thing that is subject to the hunting right itself or a third party appropriates, damaged or destroyed. The things that are subject to hunting law also include all parts of a game, such as B. Antlers / horns / horns, bones, feathers. So if you are a visitor in a hunting district without (subsequent) permission z. B. picks up a discarded antler and takes it home with you, commits poaching within the meaning of the law.

(1) Anyone who, in violation of another person's hunting law or the right to hunt,

is subject to imprisonment punished for up to three years or with a fine.

1. professionally or habitually,
2. at night time, during the closed season, using slings or in another non-huntsmanlike manner, or
3. jointly committed by several participants equipped with firearms becomes.

A piece of game is seriously injured on a street by colliding with a motor vehicle. A person who appears a little later at the scene of the accident recognizes the need to kill the animal to end its suffering. Which means it uses (firearm, knife, injection, manual, etc.) is irrelevant.

This person is exercising an emergency right here (emergency is the state of current danger to legally protected interests, which can only be averted at the expense of other interests). Ending suffering is a requirement of animal welfare and is a highly valued asset that allows the violation of foreign hunting rights.

However, mandatory requirements are:

In order to confirm the last point, the killing person should provide their personal details to the police and the person authorized to hunt or wait for them to arrive. The game must not be picked up and removed from the location of the accident. Any safety of road traffic has priority; in this case, the game must remain in the immediate vicinity.

1. fishes in violation of another's fishing law or fishing practice right or
2. appropriates, damages or destroys an object that is subject to fishing law for himself or a third party,

is punished with imprisonment for up to two years or with a fine.

Execution of the poacher and robber chief Matthias Klostermayr , the "Bavarian Hiasl", Dillingen 1771 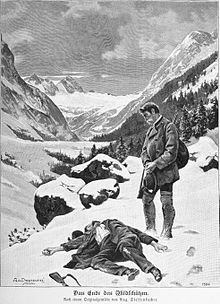 Originally everyone had the right to hunt. This was not attacked until well into the Middle Ages , and so every free man, especially the farmers , was allowed to hunt, either to defend his livestock or his land from damage caused by game or to get food. But with the ever increasing dependence of the peasants on their sovereigns as well as the increasing occupation of free lands by the nobility , this right was more and more undermined.

When the nobility began to see the hunt as a sporting challenge and a fun pastime, the citizens ' right to hunt was withdrawn and made a criminal offense. Harvest damage due to game browsing and crop failures, caused by damage to the fields of aristocratic hunting parties who stormed the fields - without any claim to compensation for those affected - increased.

At the same time, forest officials or persons authorized by the sovereign took over the protection, maintenance and monitoring of the hunting area . All have become illegal so hunters were now on as poachers or poacher called and regarded as criminals and prosecuted for antasteten the property of the rulers.

Despite all the romanticism of poachers, it must not be misunderstood that poachers were often criminals to whom a human life meant little. The many cases on record of murdered foresters and game guards bear witness to this . On the other hand, some “poachers” had no other option to save themselves and their families from starvation.

With the revolution of 1848 the hunting privilege of the nobility was abolished, but this did not initially lead to a decline in poaching, as the hunting right was tied to property or the acquisition of a hunting license as authorization. However, poaching is still a criminal offense in most countries today , as the basis of hunting law is still based on the idea of private property . Poaching, in this context “hunting poaching”, is a criminal offense against property and community values in Germany according to Section 292 of the Criminal Code . Anyone who pushes the person authorized to hunt out of his position and who, as an unauthorized person, catches, kills and appropriates game is punished for poaching . In the Federal Hunting Act , Section 23 Hunting Protection deals with poaching.

The poachers were often turned into heroes by the poor rural population . On the one hand, because they were often able to outsmart the sovereigns, on the other hand, because the captured game represented an opportunity to feed the family or to sell it for profit. The Spessart ore poacher Johann Adam Hasenstab had a flourishing game trade as far as Frankfurt.

Especially the poachers from feudal hunting areas (e.g. Spessart ) were heroized by the local population quite early on. This increased during the French occupation under Napoleon . A literal romanticism of poachers emerged in the Alps in the 19th century, since, like hunting, poaching in the dangerous mountain regions required not only extremely good local knowledge, but also particular boldness and an understanding of nature. The mountain hunters and poachers were therefore already in the early 19th century, when mountaineering was still completely foreign, characterized by high mountaineering skills, and in many cases even today some mountain hiking trails can be traced back to paths originally laid out by hunters. In the Bavarian-Austrian border region in particular, poachers were mostly smugglers . These so-called poachers' paths often involved moving game through the undergrowth (game paths, game crossing ).

In the course of the romantic era at the beginning of the 19th century, the mountain game shooters were finally portrayed and revered more and more frequently as “natural heroes” in connection with the Alpine motifs, also in art and literature .

While poachers hunted with rifles , who were often accused of having an insatiable passion for hunting, were excused in public and even glorified in homeland films in the 1950s , it must not be overlooked that this type of poaching was the exception. The rule were snare makers and carrion hunters who did not care about the suffering of the game. They neither looked for when the game that was shot at did not collapse immediately ( search ), nor did they pay attention to the closed seasons , nor did they care about the suffering of the game that had been devoured, which often suffered for days in the noose.

The penalties for poaching quickly became severe and could range up to the galley or the death penalty for repeat offenders . The nobility wanted to nip poaching in the bud with the draconian measures. The phenomenon of poaching was also politically explosive, since it threatened the hierarchical order supposedly intended by God by not recognizing the master's right to hunt from the point of view of the nobility. Poaching was thus given the quality of a political crime.

It was not uncommon for the poachers to be hunted by the ruler's forest officials and killed before they were actually captured.

Initially, the poachers were dishonored by putting on deer antlers that they had to wear for several days. Finally, standing in the pillory or heavy labor services were added as a penalty . Another form of humiliation was the so-called poacher's cap, an iron headgear that was riveted to the head of the convict with severe pain and which he then had to wear for a longer period of time. The poachers were by the train executed so often one has been as a sign of their offense and to deter antlers or fur on the gallows attached. 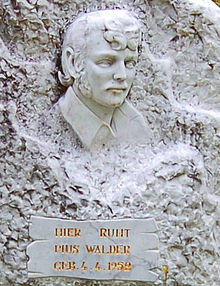 In Austria poaching is treated as a criminal offense according to the following laws:

The clearance rate of reported poaching cases in Austria is around 35 percent.

In St. Pankraz (Upper Austria) there is a poaching museum run by the sociologist and cultural anthropologist Roland Girtler .

In Switzerland poaching is dealt with under Article 17 (offense: imprisonment or fine) and Article 18 (offense: fine) in the Swiss Hunting Act.

Animal species that are more or less threatened by poaching include: