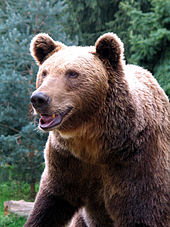 Brown bear in the French Pyrenees 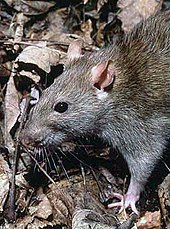 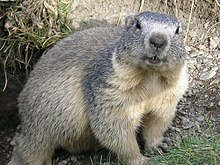 A wild animal or wild animal is an animal living in the wild that does not serve humans as a domestic , farm or breeding animal and is therefore not domesticated . In urban areas living in buildings nested or parasitic animals are wild animals, even though they do not live in the real wilderness, but retained a wild animal's lifestyle. Basically any animal, apart from humans, can be a wild animal. The wild plants represent the same principle for plants .

On the concept of the wild animal

In general, the term wild animal is used to characterize animals that are not tame . Legally, “wild” animals are ownerless (nobody owns them) “as long as they are in the wild ” (“in the wild ”).

Often a wild animal species is contrasted with domesticated domestic animal species , such as the wild geese, which in Europe includes not only the gray geese but also the Canada geese , or the wild ducks, which not only include the mallards .

Today only the Przewalski horses can be described as real wild horses , in a broader sense the term is also used for feral domestic horses (e.g. Mustangs ) - Przewalski horses as wild animals no longer exist in Europe: they have been wild animals for some time only a few specimens released into the wild in Mongolia.

The concept of wild animal includes game , but is much more comprehensive. Game is understood to mean exclusively wild animals that are subject to hunting law.

There are wild animals almost everywhere on earth, but today very few wild animals live in the wilderness , i.e. in a nature untouched by humans. Animals each have certain demands on their habitat (food, ability to reproduce, protection from enemies, etc.), which the man-made landscape often fulfills to a sufficient extent. Some wild animals have even evolved into cultural followers , e.g. B. White stork , common swift , kestrel and house mouse . On the other hand, many habitats have been destroyed or at least greatly reduced in area through human activities (agricultural and settlement areas). The number of wild animals that cannot evade due to their special needs will decrease to the same extent.

Relationship between humans and wild animals

Many wild animals enrich people's surroundings simply by their presence (nature experience), e.g. B. songbirds by their song.

Nevertheless, the relationship between humans and wild animals is not always unproblematic:

In wildlife biology and hunting in particular, wildlife management includes all measures aimed at resolving conflicts around wild animals . Wildlife managers are mainly involved in the reintroduction of disappeared species ( brown bear , wolf , lynx , beaver ). Through educational work, the willingness of the local population, but also politicians to accept, should be created. In certain cases, compensation will be provided in the event of damage. The respective animal population is scientifically observed and the habitat may be adapted to the needs of the animals. As a last resort in the event of conflicts that cannot be resolved otherwise, wild animals can also be resettled or killed.

The population of many wild animals is endangered, and many species have already died out or disappeared in human settlement areas. Since areas untouched by humans have decreased significantly and will probably continue to decrease, species that depend on them ( cultural refugees ) are fundamentally threatened.

In Germany there is the "Ordinance on the Protection of Wildlife Animals and Plant Species" ( Federal Species Protection Ordinance ), which regulates the protection of wild animals.

The WWF (World Wide Fund for Nature), founded in 1961 as the World Wildlife Fund , was one of the first organizations to raise awareness of this threat. The establishment of special protected areas , initially without legal backing, later regulated by nature conservation laws, made it possible to create retreat areas for the wild animals.

According to the German § 1 TierSchG , the principle applies “out of the responsibility of humans for animals as fellow creatures to protect their life and well-being. Nobody should inflict pain, suffering or harm on an animal without a reasonable cause. "

Dealing with wild animals is often problematic from the point of view of animal welfare law. This includes B. the keeping of wild animals in the zoo or circus . Overuse of the animals and improper keeping can cause stress in the animals and should therefore be viewed critically from an animal welfare point of view. Wild animals are also increasingly being used for therapeutic purposes (for example dolphins ), whereby in addition to the animal protection regulations mentioned, safety-related aspects must also be considered in the context of a possible risk of accident.

According to German civil law , animals are no longer things, but property law is applicable to them, unless otherwise specified. Wild animals are therefore those which, by their nature, evade human control. When they are free, wild animals are fundamentally ownerless. If they are not subject to any special right of appropriation (e.g. hunting law ) or other protective regulations, anyone can acquire them, provided they are not protected according to Appendix 1 of the Federal Species Protection Ordinance. Even a captured wild animal becomes ownerless again as soon as it regains its freedom and is not immediately pursued by the owner. In contrast to domestic animals, a tamed animal is a wild animal that has been tamed by humans through psychological pressure in such a way that it has adopted the habit of repeatedly returning to a place determined by humans. According to § 960 Abs. 3 BGB, a tamed animal becomes ownerless if it breaks this habit. Here, too, the owner can avert the loss of property if he immediately pursues the animal.

The hunting law regulates the hunt and the possession of as well as the trade in game and products obtained from it, e.g. B. Venison .