The antlers are the "headdress" of male deer ( cervids ) that is newly formed every year from bone substance . Both sexes of the reindeer ( Rangifer tarandus ) wear antlers. Antlers are primarily used as a weapon of combat and display during the rutting season , but also as a means of defense against predators . With up to 2.8 cm growth per day in elk ( Cervus canadensis ) it is the fastest known organ in the animal kingdom. 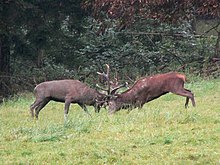 Red deer fighting in the rut . The top deer defends its claim to mating with the female animals.

The antlers are not to be confused with the headdresses of those who wear horns , like those of bighorn sheep , mouflon , bison , ibex , chamois or goats . This consists of a hollow horn with a nerve in it. The horn grows for a lifetime and is not shed, but can be damaged or break off. On the other hand, antlers are shed in the annual cycle at the end of winter and newly formed immediately afterwards. Almost all antlers have a significant weight when fully grown. The relatively small antlers of the roe deer are referred to as "horns" in the hunter's language .

The antlers are used for intra-species confrontation during the rut as part of the display behavior as well as in the fight of rival deer for the mating privilege. It can also be used for effective defense.

An abundance of other functions is assumed: Deer from northern latitudes, but also those from the Ice Age, formed and continue to develop, as a rule, more powerful antlers, in partially snow-covered regions, often with shovels, while in regions without snow, small antlers with little shovel predominate. Large and shoveled antlers are used to expose the snow-covered vegetation, an extremely exhausting ( altruistic ) use to the advantage of the entire pack. This is supported by the correlation between the formation of antlers and regional snow depths in caribou, as well as the seasonal formation and the shedding of antlers when the snow melts. Female animals with antlers suggest that the antlers can be used more often to advantage, for example for digging, for assertion within the group, for territorial defense, but also for defense against attackers. However, some biologists question some of these functional explanations with reference to the disproportionately high-energy antler production. Another function is seen in the thermoregulation, in order to be able to give off heat in summer through the growth of the antlers surrounded by blood-supplying bast.

Schematic course of the development of antlers in the red deer ( Cervus elaphus ): Spießer, Gabler, Sechsender, Achtender, Tensender - in this example a crown ten -, then twelve and fourteenenders

Controlled by the male sex hormone testosterone , two bone rods ( antler rods ) grow from the two rose bushes (cone-shaped bones) from the forehead of the deer , which, with advancing age and depending on the type of animal, can form branches (ends, rungs) or widenings (shovels). Depending on the number of these ends of the deer in which is Jägersprache as Sechsender , eight final , ten Ender , ZwölfEnder , Vierzehnender referred etc. The number of ends of the rod with possibly more ends is counted twice. If the end numbers are the same, one speaks, for example, of an "even" tens, otherwise of an "odd". The ends are called from bottom to top: eyepiece , ice rung , middle rung and crown, whereby the crown has several ends. A ten-final, in which lack the Eissprosse, but which above has a crown, is called crown tens . A ten denier that has an ice sprout but only has one fork at the top is called an ice sprout tens . These names are important when addressing the red deer. They are used to name the individuals, since normally there are no two deer with the same antlers within a pack.

During the growth phase, the bone substance of the antlers is supplied by blood vessels via a short-haired skin, the bast . In this phase, the antlers when forming Wapiti at a speed of up to 2.8 cm per day, so it is based on current knowledge, the fastest-growing organ in the entire animal kingdom.

After growth is complete, the blood supply is stopped, the bone substance dies, the bast dries out and is scraped off ( swept ) from bushes and trees by the animal . Sweeping can leave scratches on tree bark, which are considered to be minor game damage .

The freshly swept antlers are the white color of the exposed bone. The later brownish discoloration is caused by plant sap that penetrates the bone substance while the deer repeatedly beats its antlers into bushes and trees.

From autumn to late autumn of the year, a joint forms between the roebuck's antlers and the rose bush , where the antlers break off. With red deer, this happens in late winter.

Edelweiss carved into a deer rose. Sewn onto the straps of traditional lederhosen

Antlers, although they are also made of bony substance, are characterized by great elasticity. Usually, for processing antlers taken. Antlers have twice as much damping compared to bones and are therefore suitable for objects that have to withstand pressure and impact, such as hoes or the intermediate lining of hatchets. Since the Aurignacien , antler cabaret has also been made. An engraved device made of reindeer antlers comes from the hollow rock . A schematic wild cattle is possibly shown on it. Antlers are broken up using the chipping technique (scratching two parallel lines and cutting or excavating the chipping), with stone axes or (in the Neolithic ) with a sand-covered, wet leather strap or cord.

Antler tools are: fish hooks, axes ( ax from Syltholm ) hatchets (Lyngby ax), ax blades, pressure rods, picks, hammers ( device from Essen-Frohnhausen ), hook ends for spear throwers, harpoons, lance tips, perforated sticks, chisels , sewing needles , pimples, awls, Spears, lining for hatchets and connecting pieces. By smashing reindeer antlers, splinters were obtained from which tools or weapons were made. In the case of antler axes, the beveled side rungs form the cutting edge running across the antler shaft. They have been found since the Middle Paleolithic, but only became more common since the Upper Paleolithic. Antler hammers are used for pounding meat and skin, as a mallet for chisels when splitting bones or for quarrying flint (toughness). Antler picks, in which the antler rod forms the shaft and the rung the point, are suitable for rooting and chopping. They were used in Neolithic mining ( toughness ).

Antlers are primarily used as trophies by today's people (hunters), traditional costumes are regionally equipped with buttons made of antler material ( leather pants ). It used to be made from the antlers of deer, particularly from red deer that used for the preparation of drugs, of fired Hirschhornstückchen gained Hirschhorn ash ago, as Hirschhornsalz prepared as a leavening agent used.