The (Alpine) chamois ( Rupicapra rupicapra ), before the spelling reform chamois written and in the hunter language with chamois or chamois called, is native to Europe and Asia Minor type of caprine . Together with the Pyrenean chamois and other species, it belongs to the genus of chamois ( Rupicapra ).

Adult chamois have a head-trunk length of 110 to 130 centimeters, a tail up to eight centimeters long, a height at the withers of 70 to 85 centimeters and a weight of 25 to 40 kilograms (females) or 35 to 50 kilograms (males) . Chamois have a strong, but stocky build. The slender neck has a short head that is strongly narrowed towards the muzzle. Both sexes wear horns, also known as crutches . These are up to 25 centimeters long and are twisting. They are notched circularly at the root, rising straight and curved backwards at the tip. In contrast to the antlers of deer and roe deer, the horns are not shed in winter. The pointed ears of the chamois are about half a head length.

The chamois has relatively long, strong legs with relatively large hooves. In contrast to the red deer , the chamois has no tear pits, but a rutting fig. This glandular organ is located in a cavity behind the horns. During the rutting season it secretes a greasy, foul smelling secretion.

In winter, the chamois is dark brown or brown-black on top, white on the belly, yellowish white on the feet and head, and slightly darker on the top and on the muzzle. Both dresses blend into each other imperceptibly. Hunters distinguish the large, dark brown forest animal from the smaller, reddish brown grattier .

A color mutation of the chamois, which is essentially restricted to Styria and has been documented there since the 16th century , is called Kohlgams . It is characterized by the fact that the otherwise light underside, throat and cheek areas are darkly colored, with the forehead and inner ears retaining their usual light coloring.

Chamois in the High Tatras 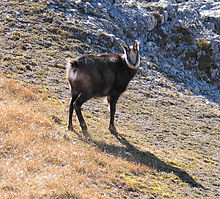 The chamois is a species largely restricted to Europe, which is a noteworthy feature in the animal world. It populates the entire Alpine region and parts of the Balkans . The largest area is in the Hochschwab area in Styria . As archaeological finds show, the occurrence extended to other mountainous areas as recently as 7000 to 4000 years ago, for example in the German low mountain ranges. After relocations and isolated immigration from the Alps, small populations now exist again in the Jura , in the Vosges , in the Black Forest , on the Swabian Alb , on the Franconian Alb and in the Lusatian Mountains .

As a habitat, the chamois is dependent on steep, sometimes rocky terrain. This is where their physical abilities come into their own. A comparatively large heart, a high proportion of oxygen-binding red blood cells and the special construction of the spreadable hooves enable the chamois to move reliably and perform well under these conditions. The slope of the landscape is also used to always stay in a suitable microclimate, especially since the animals perceive temperatures as low as 12 degrees as rather uncomfortable. Basically, whether the area is forested is of no central importance. In the Alps it is found that the chamois are mostly above the forest belt at altitudes between 1500 and 2500 meters. In winter, food shortages force them to descend to deeper - wooded - areas.

Females and young animals live in herds of 15 to 30 animals. The social ties change with the seasons. They are very intense in summer. The herd cohesion loosens towards winter and some herds mix or disintegrate. Bucks live solitary and do not seek out a herd until late summer. They drive away the male cubs when they are old enough and assert themselves in fights against other members of their sexes. Mating then takes place in the second half of November.

At the end of May or beginning of June the chamois throws in, rarely two or three young, which soon follow the mother and are suckled for three months. The gestation period is six months. The goats become sexually mature after two years. In the third year the boy is fully grown. The chamois buck reach an age of 15 years, the females are up to 20 years old.

Their diet consists mainly of young shoots of alpine shrubs ( alpine rose , alder , willow , juniper , pine ) and trees as well as herbs , leaves and grasses, and in winter also moss and lichen .

Predators such as lynx , wolf and bear chase after them. The golden eagle hits chamois fawns every now and then.

Chamois are also endangered by rolling stones and pieces of rock and by avalanches (especially early autumn avalanches are often fatal for many chamois fawns ), and in severe winters also by lack of food.

Because of their way of life, chamois hunt mostly takes place in the high mountains. Since chamois do not shy away from steep ridges or rocky areas, hunting is arduous and often dangerous. The numbers that can actually be hunted are often very small, as many young animals do not survive due to the adverse environmental conditions, especially in the high alpine winter. Epidemics such as chamois blindness , mange and other parasitic and infectious diseases can also be responsible for high death rates. However, due to the safe population sizes, a notable stock depletion can be recorded in the low mountain range regions. In the hunting year 2015/16 the chamois hunt only took place in Bavaria with 4250 and Baden-Württemberg with 500 animals. In 2010/11 the numbers were 4070 and 400. In contrast to other hunted animal species, the German total quota has remained almost unchanged for 15 years. In Austria , too , the rates are stable: in 2015/16 they were 20,370 and in 2010/11 20,300 chamois.

In Switzerland , the killings in 2009 and 2010 were around 13,000 each. The chamois population in Switzerland has been decreasing continuously for years. The shooting figures were not appropriate to the actual circumstances, so that overhunting has decimated the population. In particular , too little consideration was given to factors such as climate changes, new predators and increasing tourism. The shooting rate in 2015 was 11,650 animals, the lowest value in 15 years. The total population of chamois in Switzerland is 90,000 animals. In order to secure the stocks in the long term and to put an end to the downward trend, JagdSchweiz and the Hunting and Fishing Administrators' Conference developed a joint position paper and a brochure on the responsible use of chamois in December 2016 . The aim is “the hunt for the chamois will be adapted to local and current conditions. When hunting, the question is not which chamois we want to hunt, but what the stock allows to be taken in order to secure healthy stocks with the most natural age and social structure possible. To answer this question and as a prerequisite for successful management, you need a good database. The willingness of the hunters to help collect data and to conserve the chamois population in certain areas is essential. "

The meat of the chamois is palatable and is highly valued; the chamois skin gives beautiful leather, which is mainly used for trousers and gloves. The horns are made into stick handles and the hair on the withers of the goats is used as a hat ornament ( chamois beard ).

In the stomach of the chamois you can sometimes find the so-called chamois balls ( bezoar ). They used to be paid dearly because of their supposed medicinal efficacy, just like chamois blood, but they have no medical value. Captured young, the chamois allow themselves to be fed with goat's milk and become very tame, sometimes they reproduce in captivity.

There are currently four subspecies:

Overall, the population in Europe is estimated at around 400,000 chamois. In addition, there is a chamois population on the South Island of New Zealand that descends from eight chamois (two males and six females, two of which are pregnant), which were imported from Austria by ship in 1907 and released in the Aoraki / Mount Cook region . Two more animals followed in 1914. Chamois were imported for sport hunting purposes.