The common dormouse ( Muscardinus avellanarius ) is a mouse-like, nocturnal rodent from the family of the dormouse (Gliridae). It weighs 15 to 40 grams and is almost 15 centimeters long, almost half (5.8 to 6.8 centimeters) of the length is accounted for by the tail . The fur is yellow-brown to red-brown with a white spot on the throat and chest, on the tail it is usually a little darker; pure white or black animals were also detected. They live to be 3 to 4 years old in the wild and are sexually mature at one year. 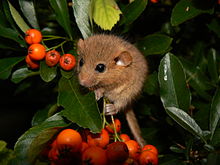 Distribution of the dormouse

Their preferred habitat are dense bushes, hedges, wide forest fringes and mixed forests with rich undergrowth. Hazel bushes (Corylus avellana) and blackberry hedges are particularly popular . However, it seems to be quite adaptable and noise-tolerant, as animals and nests have already been found in the dividing strips of highways planted with bushes.

The large distribution area of ​​the dormouse extends over almost all of Europe, with the exception of the Iberian Peninsula, southern France, the northern British Isles and Scandinavia. In the east the occurrence extends to Russia. However, the spread is often patchy or regionally limited.

During the day she sleeps in her fist large spherical Kobel called nest , they usually made of suitable Grasspreiten, deciduous leaves and other things or building in the immediate vicinity available material and hang in bushes and trees. She also often uses nesting holes and boxes . In the period from May to the end of October, it roams around at night and feeds on buds , seeds , berries , insects , bird eggs, small invertebrates , walnuts and hazelnuts . It is therefore one of the omnivores .

For hibernation (seasonally beginning from October to the end of April at the earliest) the dormouse uses nests which it creates on the ground in the vegetation, in the leaves or brushwood, between roots, on tree stumps, in tree holes or in frost-proof burrows. Here, their reduced body temperature significantly. The female gives birth to two to five cubs once or twice a year, which remain with the mother in a slightly larger nest until they become independent, which begins around 40 days after birth. The female dormouse has four pairs of teats for suckling , on which the young suckle for about a month. The gestation period is about 22 to 24 days.

If the dormouse is grabbed by the tail by a predator, for example, it can strip off its tail skin and thus escape ( autotomy ). The rest of the bare part of the spine dries up and eventually falls off or is gnawed off by the dormouse. Unlike lizards , the tail cannot be regenerated, but bushy hairs grow back on the stub.

To save energy, the dormouse is able to fall into a torpor for a few hours during the day . It is a state of temporary dormancy in which the dormouse becomes paralyzed and unable to move. The metabolic processes are slowed down and the body temperature drops to around 32 degrees Celsius. This condition occurs mainly in unfavorable weather conditions, low temperatures or lack of food. The dormouse is usually curled up in its nest.

The main enemies are the red fox , weasel and the ermine . Other enemies are birds of prey and owls , such as the barn owl and the tawny owl . Since they cannot defend themselves, dormice are escape animals .

During hibernation, they are occasionally dug up and eaten by wild boars .

The dormouse is listed in the IUCN's worldwide Red List of Endangered Species in the Least Concern category , i.e. as not threatened. However, due to the destruction and fragmentation of habitats, it has become rarer in northern Europe (England and Wales, Sweden, Germany, Denmark). For example, in England and Wales, their numbers fell by a third between 2000 and 2016.

The common dormouse is listed in Annex IV of the Habitats Directive in the EU member states . There is strict species protection in accordance with Articles 12, 14, 15 and 16 of the Directive, as for all species listed in Appendix IV.

The dormouse in literature

A dormouse plays a prominent role in the "crazy tea party" in Lewis Carroll's Alice in Wonderland . In the book The Animal House , written by the Russian poet Samuil Marschak , a dormouse is one of the protagonists.