The title of this article is ambiguous. Further meanings are listed under Bud (disambiguation) .

In botany, the bud (also called the eye and the gemma ) is the youthful state of a shoot in which the stem members are still very short, the leaves on them are therefore still tightly packed and also not very advanced in their development. Every sprout that is being trained therefore ends in a bud (peak, main, terminal or terminal bud).

In many plants, however, new shoots regularly form on the side of the stem, namely in the axils of the leaves (side or axillary buds, lat. Gemmae laterales s. Axillares ).

Their distribution on the stem is only determined by the position of the leaves, and the leaf that the bud carries in its axilla is called its supporting, supporting or mother leaf.

Most of the time there is only a single bud in the leaf axil, but z. B. with Lonicera one or more immediately above the same; these are called secondary or secondary buds (Gemmae accessoriae) . The axillary buds cause the stem to branch normally because each one grows into a new branch; that is why the position of the branches depends on the position of the leaves of the mother shoot, and that is why trunks which do not develop side buds remain unbranched ( palms , tree ferns ). On the other hand, the summit bud also regularly fails in some plants, and the side bud initially below it, which can then easily be confused with a true terminal bud, takes over the continuation of the branch.

This occurs particularly with woody plants ( linden , elm , hornbeam , common hazel ); In lilacs ( Syringa ) and Pimpernuss ( Staphylea ), the branch without the apex bud ends with two opposite side buds.

Actual summit buds have z. B. oak , horse chestnut , poplar , maple (Fig. 1) and fruit trees . Depending on the type of shoot into which a bud develops, a distinction is made:

In all side buds, the vegetation point arises on the surface of the mother sprout in the earliest period, shortly after or almost simultaneously with the formation of the bract , although the full strengthening of the bud occurs at a later age of the shoot. The so-called accidental or adventitious (Gemmae adventitiae) formed on the other hand always developed only on already, often very old plant parts are quite random in its position by more dispersed soon, soon heaps to emerge as especially on old tree trunks ( coppice ) , and then always arise inside, namely in the cambium layer , so that they break through the bark . They also occur on the uppermost roots that run horizontally on the surface of the soil and then cause a root rash (poplars, sloes, vinegar trees, sour cherries and also in some herbaceous plants such as taraxacum , goose thistles ( Sonchus ), etc.); They sometimes even arise on leaves, especially when they are stuck in moist soil, as in the case of begonias , hyacinth leaves, and the like . a., or on leaves that have not been detached, as with Cardamine. 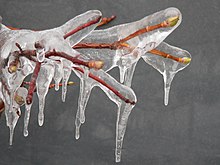 Buds in winter, surrounded by ice

On each bud, a distinction is made between the bud axis, that is, the still quite shortened part of the stem, and the leaf organs sitting on this, still lying close together. In the winter buds of our woody plants, the latter are mostly scale-shaped, more or less leather-like in texture and often dark in color. They mostly cover the bud completely and provide the more delicate, inner parts with protection against the influences of winter weather (bud covers , tegumenta ; bud scales, squamae see perulae ); inwardly, they gradually change in shape and formation into the leaves, which are already laid out in the bud. Buds that have no cover and are only covered by the outermost leaves are called naked (Gemma nuda) , e.g. B. Blood-red dogwood ( Cornus sanguinea ), woolly snowball ( Viburnum lantana ) and buckthorn ( Rhamnus frangula ).

The outer leaf organs of the bud are often covered with a cover, which increases the protection against external influences. Hair formations ( Gemma pubescens ) can be found , and more often a sticky secretion made of resin or resin and rubber , which sticks together the bud scales and covers them ( Gemma glutinosa ). Both the way in which the leaves of the bud cover each other ( covering , estivation) and the position of the individual leaf in the bud ( bud position , vernation) show important peculiarities.