The title of this article is ambiguous. Further meanings are listed under Faulbaum (disambiguation) .

The alder buckthorn ( Rhamnus frangula ), more Real buckthorn or shooting Berry and Pulverholz called, is a flowering plant in the family of the cross thorn plants (Rhamnaceae). It is widespread from Europe to Western Siberia and Morocco . The name "buckthorn" comes from the slight rotten smell of the bark . The bark is used medicinally as a laxative , the charcoal extracted from the buckthorn tree was previously used to make black powder .

Prunus padus is also known as buckthorn because of its brittle branches and similar bark. Rhamnus purshiana is known as the American buckthorn .

The buckthorn is a multi-stemmed, irregularly branched shrub that usually reaches heights of 2 to 4 meters. The stems have a diameter of about 5 centimeters. It grows with many stems, especially on wet locations. It seldom grows as a small tree that reaches heights of growth of up to 8 meters and a diameter of no more than 15 centimeters at chest height . Young shrubs are fast-growing. The branches are only slightly hairy.

The roots are initially reddish-yellow and later turn red; they turn red-brown when dry. They form an endotrophic mycorrhiza . The root system is extremely flat on wet locations.

The wood is semi-ring pored. The sapwood is yellowish-white, the heartwood yellow-red to red. The bulk density is 0.56 to 0.6 g / cm 3 . The wood is rich in fibers . The rays are one to three rows and 40 to 50 rows high. A bark is not formed. Individual literature reports speak of a dark gray, slightly cracked bark in thicker trunks. The bark is around 3.5 mm thick. The cortical parenchyma sometimes forms narrow, irregular bands. Sklereids are not formed. Sieve tubes lose their function in the second year.

The alternate leaves arranged on the branches are divided into a petiole and a leaf blade. The petiole is 6 to 14 millimeters long. The simple leaf blade is 40 to 70 millimeters long and 25 to 50 millimeters wide and elliptical to ovoid or obovate. The base is rounded. The spreader tip is rounded or pointed to pointed. The leaf margin is usually entire, rarely indistinctly serrated. Both leaf sides are practically bare and colored light green on the underside. The leaf blade has seven to nine strong pairs of leaf veins, which are arched and parallel and indented on the upper side, while they protrude clearly on the underside. The leaves turn yellow in autumn. The leaves are probably the most important caterpillar food for the lemon butterflies . 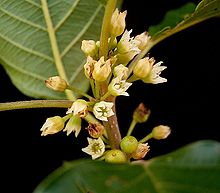 Two to ten flowers are grouped together in a lateral trumpet inflorescence .

The hermaphrodite, greenish-white, five-fold and short-stalked flowers are relatively small and inconspicuous with a size of 6 to 12 millimeters. The weakly ribbed flower axis is cup-shaped and lined with a disc that acts as a nectarium . The five white, internally keeled sepals are triangular and longer than the five small, white and slightly two-pointed petals . The stamens are short and are each covered by a petal like a hood. The stamens are short and the anthers are relatively large. The ovary is medium continuously with a short stylus and the scar is two to three parts.

The flowering period extends from late May / early June to September. The pollination is done by bees , bumblebees, parasitic wasps and beetles . 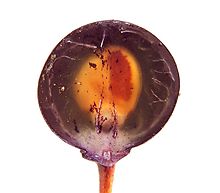 The spherical stone fruits with a diameter of about 8 millimeters contain two to three stone cores. The initially green stone fruits turn red from July and then turn black from mid-August when they are ripe. Because of the long flowering time, a shrub usually bears green, red and black fruits at the same time. The fruits fall off between September and December; this gives plenty of rejuvenation under a shrub. The distance dispersal is carried by birds as Fieldfares , mistletoe thrushes and pheasants .

The buckthorn is widespread in Europe . It is absent in the south of the Balkan Peninsula , in Sicily , Sardinia and Corsica and in the south-eastern parts of the Iberian Peninsula as well as in the northern parts of Scandinavia and Scotland . It is rare in Ireland , but common in England and Wales . In the east the distribution area extends to the Urals and Western Siberia . There are also occurrences in the Caucasus and Anatolia . In North Africa there are deposits in Morocco . In eastern North America , the buckthorn is a neophyte .

The buckthorn prefers subcontinental to suboceanic climates . It grows mainly on fresh, alternately moist and damp soils , but avoids waterlogging. The species loves deep acid loam, sand and clay soils. Although it often grows in alder quarries, birch bogs and alluvial forests , it also thrives in drier locations. Opposite pH and light conditions is the Faulbaum indifferent . It is a weak character species of the order Alnetalia, but also occurs in societies of the orders Prunetalia, Fagetalia, Quercetalia roboris, in those of the class Vaccinio-Piceetea or the association Erico-Pinion. In the Alps the buckthorn can be found at altitudes of 1500 meters, in Anatolia up to 1700 meters. In the Allgäu Alps in Bavaria, it rises at the Zipfelschrofen above Hinterstein to an altitude of 1130 meters.

It was first published in 1753 under the name ( Basionym ) Rhamnus frangula by Carl von Linné in Species Plantarum , p. 193. The synonym Frangula alnus was published in 1768 by Philip Miller in The Gardeners Dictionary ed. 8: n.º 1. Another synonym of many is Frangula dodonei Ard. nom. inval. Depending on the system used, this species belongs to the genus Rhamnus or Frangula .

One can distinguish the following subspecies, for example if one uses Frangula as a genus with the names:

The wood of the buckthorn produces a high quality charcoal with a low ash content. This was particularly popular in the past for the production of black powder. The common name “powder wood” for the species goes back to this use.

Buckthorn in the form of the bark drug (Frangulae cortex)

The dried bark of the trunks and twigs is used for pharmaceutical purposes as buckthorn bark ( frangulae cortex ). The bark drug is used as a large intestinal laxative for the short-term treatment of constipation . To do this, the bark is peeled from the trunks and branches and either dried in the sun and then stored for a year or artificially aged at higher temperatures (80 to 100 ° C). The drug must contain at least seven percent glucofranguline , calculated as glucofrangulin A , in order to meet the requirements of the European Pharmacopoeia .

Of ingredients containing drug , the anthraquinone derivatives Glucofrangulin A and B , Frangulin A and B , various Frangulaemodinglykoside as Frangulaeemodin-8 O -β-D-glucoside and a few free aglycones . It also contains tannins and peptide alkaloids.

In the drug, these substances - in contrast to other anthranoid drugs - are predominantly in the oxidized anthraquinone form. They are less strongly anti- absorptive and secretagogue (prevent less the absorption of water and ions from the intestinal lumen and less promote the release of water and ions into the intestinal lumen). This results in the milder effect of buckthorn bark.

The cut drug is as a tea infusion ( infusion administered). Buckthorn bark is found in many industrial teas. In addition, the buckthorn bark dry extract (Frangulae corticis extractum siccum normatum) with 15.0 to 30.0% glucofrangulins is used in combination preparations in the form of coated tablets or tablets.

Berries, leaves and fresh bark are classified as toxic . This means that buckthorns are not bitten by game, but they are swept . Poisoning is considered rare. They occur after children eat the fruit or after using large amounts of fresh bark as a laxative. Symptoms include nausea, vomiting, abdominal pain and even watery and bloody diarrhea .

Puccinia coronata on the underside of the leaf

The buckthorn is attacked by the rust fungus Puccinia coronata var. Coronata with spermogonia and aecidia .