The title of this article is ambiguous. Further meanings are listed under Auwald (disambiguation) .

Description of the biotope

If the location is frequent or long-term, high, and usually quickly flowed through (100 to 200 days a year), a softwood floodplain forms . In the case of shorter or less frequent floods with a low flow velocity at a greater distance from the center of the river, a hardwood floodplain forms . Extensive hardwood floodplains can therefore only be found in the larger river valleys. In the case of rare and irregular floods, there are forest types that also occur outside of the floodplain, for example oak and hornbeam forests . By waterlogging sensitivity of Beech otherwise prevailing in Central Europe absent beech forests but (can Ellenberg exceptionally but also book rich lowland forests occur if the soil substrate and the flooding frequency is sandy not too high, in which case the water table is falling after the flood very quickly again. Such forests are said to occur on the Ems, for example).

On streams and small rivers with mostly narrow floodplains and short-lasting floods, there are creek-accompanying alder and ash forests that reach up to the waterline, in lower elevations with black alder, in the Alps and the higher low mountain ranges replaced by gray alder (floristically these alder trees are Ash forests close to hardwood floodplain forests).

Due to the small-scale mosaic of different site conditions, alluvial forests are among the most species-rich and vital habitats in Europe. Due to the preference of the floodplains as a settlement area, near-natural riparian forests in Central Europe have almost disappeared. They are protected throughout Europe in accordance with the Habitats Directive , Appendix I: “ Alluvial forests with Alnus glutinosa and Fraxinus excelsior (Alno-Padion, Alnion incanae, Salicion albae) Code 91E0”; "Alluvial hardwood forests with Quercus robur , Ulmus laevis , Ulmus minor , Fraxinus excelsior or Fraxinus angustifolia (Ulmenion minoris) Code 91F0". The first type of habitat is also given priority protection. According to the directive, the member states are obliged to set up a network of protected areas of sufficient size to preserve these habitat types; this has been given the name Natura 2000 . According to the Federal Nature Conservation Act, alluvial forests are among the biotope types that are legally protected according to §30 (as "natural or near-natural areas of flowing and standing inland waters including their banks and the associated natural or near-natural vegetation accompanying the shore as well as their natural or near-natural silting areas, oxbow lakes and regularly flooded areas" ).

Alluvial forests are shaped by the dynamics of flowing water. Along the river, the flow velocity influences , and across the flow direction also the height and duration of the flood significantly influences the vegetation . It is also important whether the floods occur particularly in spring (in lowland and low mountain range rivers) or in summer (in alpine rivers). A distinction is made between five zones of the forests parallel to the river: source course, upper course, middle course, lower course, estuary. The upper reaches are very different in the mountains, in the low mountain ranges and in the lowlands.

In addition to this longitudinal division into river sections , a more or less pronounced transverse division can be recognized, a series of steps from the middle of the river to the edge of the floodplain. These can be seen especially in the middle and lower reaches. The typical features of the alluvial forest are the rivers with sediment deposits (in order: gravel - sand - clay ). This reflects the flow speed of the water and the resulting different transport forces for sediments. The extensive gravel and gravel bodies of the Central European floodplains were created in the Ice Ages. Only in the immediate vicinity of the river is the flow speed high enough that it is relocated today and the gravel is exposed by erosion. A little further away from the water, sandbanks are deposited at lower flow velocities. At a distance of 5 to 10 meters, the flow is already strongly slowed down by the vegetation, here (strongly clayey) floodplain loam predominates . Riparian forests reduce the flow rate and influence the morphology of the water. Different stages of succession can occur side by side in the alluvial forest .

Alluvial forest on the Middle Rhine near Bingen

At the headwaters in the mountains, vegetation-free gravel banks predominate because of the high dynamics. In addition to willows (Salix species), the German tamarisk ( Myricaria germanica ) can sometimes develop low-growing bushes. The floodplains of the springs and source streams in the low mountain ranges and in the lowlands are usually so narrow that no independent floodplain or riparian forest develops. They are simply covered over by the adjacent forest. However, special species can be found in the herb layer. Forest types called "spring forests" with extensive drainage swell belong to the quarry forest .

The alluvial forest on the upper reaches is mostly just a narrow band that accompanies the river. The alder and ash forests that accompany the river and stream are typical here. In the mountains, the gray alder is the predominant tree species, after which the gray alder floodplain forest ( Alnetum incanae ) is named. At lower altitudes, the gray alder is replaced by the black alder and the ash . Characteristic forest community is the alder-ash forest, the Alno-Fraxinetum (according to other authors after the common bird cherry , Prunus padus , also called Pruno-Fraxinetum), as well as a number of similar and closely related societies.

At the middle reaches the flow speed decreases significantly, the sedimentation of nutrient-rich fine material (floodplain clay) predominates. In addition to the vegetation of the gravel banks, softwood and hardwood meadows are now developing.

A significant decrease in the gradient and increasing meanders characterize the situation on the lower course of the river. The flow speed decreases, consequently even the smallest suspended particles ( clays and silts ) sink down. Periodic or temporary floods result in very nutrient-rich soils, depending on the original rock or substrate. The characteristic soil type is the brown floodplain or Vega , on Alpine rivers more common black floodplain or Tschernitza . Softwood and hardwood floodplain are here often present in the natural state in a large mosaic of old arms, Brüchern and riparian zones.

At the estuary, the development of vegetation depends on whether the tides influence the water level. If this is the case, as is the case with most Central European rivers, special reed beds form near the water . These salt-influenced locations are therefore mostly forest-free by nature. In the slightly higher peripheral areas of the floodplain, the tidal reeds are still accompanied by the hardwood floodplain forest.

The salinity of the tide is a limiting factor. An example of a tideau forest is the Heuckenlock nature reserve in Hamburg-Wilhelmsburg.

The series of steps in the middle and lower reaches ideally follow this structure:

Embedded like a mosaic in the lower reaches: oxbow lakes (cut meander loops and side channels) converted to water bodies of various types, mostly only in the deepest layers of quarry forests (e.g. March)

The typical alluvial forest type of the middle reaches is the gray alder forest, which requires periodic flooding (at least once every 10 years). Most of the time, the roots of the gray alder are in direct contact with the groundwater that accompanies the river. The alluvial clay is typical for floodplains in the middle reaches. The alluvial forests, especially in the foothills of the Alps, naturally even include forests that are extremely dry to the ground, if the floodplain is mainly composed of gravelly or sandy material. This is because when the water level is low, the groundwater level in the gravel soil (which is always at the same level as the river water level) can drop so much that the water can hardly be reached by the roots of many plants. Especially in the floodplains of the rivers coming from the Alps in Bavaria (Lech!) Or on the uppermost levels of the floodplains rich in gravel, there are extremely dry heather and pine forests. Locally, the soil can dry out to such an extent that (semi-) natural poor grasslands (called Brenne or Heisslände) are blasted into the forest.

Adjustments to the water 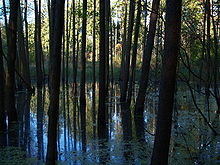 Alluvial forest on the Oder

The plants of the alluvial forest can show special adaptations to the changing water level in the root area. The white elm changes its root system from a taproot to a heart root in old age , in order to probably root through as much of the soil as possible above the water table.

The black alder can be found on year-round water-saturated and almost oxygen-free soils with only minor and short-term floods, which supplies its roots with oxygen via respiratory openings in the trunk.

Alder and willow have relatively large air-filled spaces between the cells (intercellulars) in their roots, in which oxygen is transported. This can be absorbed above ground via cork warts ( lenticels ) and transported to the roots by diffusion and thermo-osmosis . Some willows prefer to spread via broken pieces of branches that land and take root (e.g. broken willow ). The high speed of growth is also typical for trees in the softwood floodplain, as the natural river constantly changes the morphology of the bank area.

Significance and threat to alluvial forests

Many riparian forests were cut down and converted to pastureland. The desire to regulate the course of the rivers and make them navigable all year round, especially in Central Europe, left only remnants of the original alluvial forest (around 300 km² of alluvial forest, 60 km² of which was natural), such as the Leipzig alluvial forest . The more frequent and severe river floods receive greater public attention. They indicate an undesirable development in hydraulic engineering (see torrent control , water correction ). Measures to correct this undesirable development consist in the renaturation of mainly smaller rivers and river sections (e.g. Isar , Donau-Auen National Park ).