Lenticels or cork pores are areas of the bark of wood plants in which an opening created by tearing open the topmost cell layer, under which dead, not firmly connected cork cells are located, enables gas exchange between the ambient air and the living tissue below the lentic cell. Lenticels can be recognized on trunks and branches of bushes or trees as small, rounded or elongated protuberances (" cork warts "); they also form on stilt roots and pneumatophores .

For apples, the amount, number and shape of the lenticels on the peel are used to describe the variety. Some apples, such as the star reindeer , are even named after their striking lenticels. 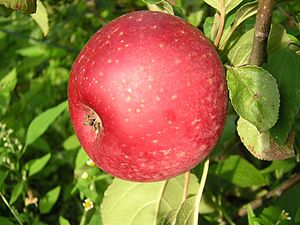 Fruit of the variety Rote Sternrenette with conspicuous lenticels

Lenticels arise in the course of the crust formation. Below the epidermis , a cork cambium (phellogen) forms cork cells; the bark of cork eventually replaced the epidermis. Cork cells are impermeable to gases and water due to the deposition of suberine . In places with high division activity of the phellogus (often below a cleft opening ), the production of cork cells creates a swelling that pushes the phellogen inwards and tears the epidermis. The rounded filling cells produced here and which die after the suberin storage separate from each other and lie loosely below the opening. A gas exchange can take place via the spaces between the cells ( intercellulars ), as can be demonstrated in experiments with radioactively labeled carbon dioxide or with infrared gas analyzers.

The living guard cells formed stomata (stomata) in the epidermis photosynthetically active tissues are also used in gas exchange; In contrast to lenticels, however, stomata are actively opened or closed by the plant.