The German tamarisk ( Myricaria germanica ), also called Rispelstrauch or Ufer-Tamarisk, is a species of plant from the genus Rispelstäucher ( Myricaria ) within the family of the Tamarisk plants (Tamaricaceae). It is widespread in Eurasia and is the only species of the tamarisk family native to Central Europe.

The authors disagree on the maximum age: it is between 10 and over 70 years.

On their upright, rod-like branches sit very small, oblong to lanceolate, alternate leaves (2 to 5 millimeters long, scale-shaped, often overlap in the shape of roof tiles), which are pressed against the younger branches, but rather protrude on the older ones. The leaves are glabrous and gray-green in color.

Especially on the main branches there are terminal, simple or paniculate, compact racemose inflorescences . The inconspicuous flowers are hermaphroditic. The mostly five, rarely four sepals are linear with a length of about 3 millimeters. The usually five, rarely four white to light pink petals are about 4 millimeters long. of the ten stamens five are about as long as the calyx and five are slightly longer. The ten anthers are purple or red.

When the weather is favorable, pollination is carried out by insects that are attracted by nectar . In rainy weather, when the flowers remain half to completely closed, self-pollination can also occur. The flowering period extends from May to August, but it is strongly influenced by the location (especially the altitude).

The brown seeds weigh only 0.065 mg, they are equipped with a feather-shaped head of hair ( pappus ) 5 to 7 millimeters long and can be described as typical paragliders.

In addition to being able to fly, the seeds, similar to those of the willow, are characterized by rapid germination - in favorable cases the germination rate is 100% within 24 hours.

The German tamarisk is found in the European mountains, Asia Minor , Armenia , the Caucasus , Iran and Afghanistan . In Europe, the distribution area extends from the Pyrenees to Scandinavia and the Caspian Sea. The southern border is formed by the Pyrenees and the central Apennines, up to the Illyrian Mountains on the eastern shore of the Adriatic. The German tamarisk is limited to the middle and upper reaches of rivers in montane to subalpine altitudes up to altitudes of 2350 meters. In the Himalayas there are deposits up to an altitude of 3950 meters. In Norway, however, it has also been detected as a drift at altitudes of 630 meters.

It was introduced in New Zealand. It was first detected in 1986 on the South Island (Canterbury Plains), where it is spreading along some rivers.

The following current occurrences are given in the literature for the Alpine region:

Bachmann writes in her thesis : "Myricaria is germanica in the Alps in their occurrence extremst [sic] been limited and the few places where they could hold are of European importance. The extensive populations of the German tamarisk in South Tyrol, together with those in the Tyrolean Lechtal and those in the Hinterrheintal, are among the last extensive natural occurrences of the species in Europe. "

Young plant on the Inn near Serfaus, Tyrol 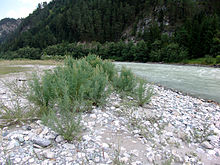 Tamarisk bushes on the Inn near Pfunds, Tyrol

The German tamarisk is one of the pioneer plants that settle on newly formed gravel surfaces of the Alpine and pre-Alpine rivers. In near-natural mountain rivers, the river material is rearranged by annual floods, so that existing gravel surfaces are eroded and at the same time newly deposited elsewhere. It anchors its tap roots firmly in the subsoil and thus survives the recurring shifts. For the plants this also means an extreme situation between flooding of their habitat and drought, since gravel is very permeable to water and can therefore hardly store water. Since the shrub needs a lot of light and is easily overgrown by willows and alders, it can only persist in the long term where new sand and gravel banks are constantly emerging.

Myricaria germanica is one of the first plant species to settle on newly formed river alluvions. It grows scattered, mostly forming herds on gravel and gravel and sandbanks - most often in open areas that are on the one hand heavily flooded at times during high water, but on the other hand can also dry out strongly. It can also occur on railway embankments or in gravel pits if it is carried over.

The German tamarisk is quickly displaced by other species due to light competition and is therefore dependent on periodic disturbances such as flooding and shifting or the formation of new gravel banks. It is only indirectly dependent on these disturbances in that the competition between the willow species is impaired or even eliminated. Due to the complete restructuring of the river systems in the Alpine region , e.g. For example, through reservoirs and weirs , the natural transport of sediment has been reduced so much that a new formation of gravel areas is hardly possible. The habitat of the German tamarisk was so severely restricted that it no longer occurs in some areas (e.g. on the Salzach ) and is classified as endangered overall.

In the older literature it is mostly stated that the German tamarisk grows exclusively on calcareous soils and primary rock. According to more recent findings, however, it also thrives on silica-like gravel fields.

The German tamarisk is a characteristic of the wild rivers and torrents near flowing waters of Europe. Due to the restructuring of the river systems in the Alpine region in the last few centuries, the dynamic habitat was largely destroyed.

In the context of the Habitats Directive , Annex 1, the EU member states must designate special protected areas for natural habitats of community interest - including “Alpine rivers with riparian trees from Myricaria germanica” (habitat type No. 3230).

In the Red List of Germany , both the German tamarisk and Myricario-Chondrilletum and Myricarietum are listed under category 1 (“critically endangered”).

In the Austrian Red List , Myricaria germanica has status 1 (“threatened with extinction”), in the federal states of Upper Austria, Lower Austria and Vienna it already has status 0 (“eradicated, extinct or lost”). Willow-tamarisk bushes in Austria have status 1 (“threatened with complete destruction”) in the Alpine region and status 0 (“completely destroyed”) in the continental region.

The German tamarisk is classified as "potentially endangered" on the Swiss Red List . 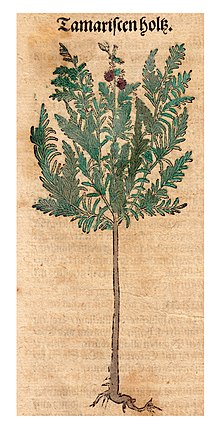 The Mediterranean classics of Materia Medica ( Dioscurides , Pliny ...) recommended preparations made from tamarisk species, especially for "diseases of the spleen". At the turn of the 15th to the 16th century, this recommendation for use was also applied to preparations made from the German tamarisk by the northern European doctors. From the point of view of the humoral doctrine , "diseases of the spleen" showed up through the following symptoms: "White and louder urine, loss of appetite and vomiting of cloudy (" melancholy ") fluid, melancholy and sad body, the person is careful and has heavy dreams." As Other indications for the tamarisk have been water retention and urination disorders since ancient times .

In 1500, the Strasbourg surgeon Hieronymus Brunschwig reported in his small distilling book about tamarisks on the sandbanks of the Rhine: "... But here des da vil wachſen is the rinß in the green ..."

Tamarisk oil , similar to mountain pine oil, used to be used for inhalations and rubs.