Maple is a redirect to this article. Further meanings are listed under maple (disambiguation) .

The maples ( Acer ) form a genus of plants in the subfamily of the horse chestnut family (Hippocastanoideae) within the soap tree family (Sapindaceae). There are 110 to 200 types of maple, depending on the author. They are widespread in temperate and tropical areas in Eurasia , North Africa , Central and North America . Many species are used in many ways. 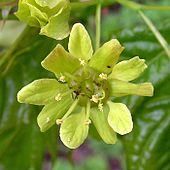 The constantly against arranged on the branches leaves are divided into petiole and leaf blade. The mostly simple leaf blade is mostly palmate. Some species have imparipinnate leaf blades with three or five leaflets , for example the ash maple ( Acer negundo ). There is a hand-shaped nerve. The leaf margin is smooth or serrated. There are no stipules . The foliage of many species has an intense autumn color.

The flowers are clustered in umbrella or umbellate , rarely racemose or large panicle inflorescences .

There are schizocarps formed, the winged than two Nuts ( Samara drop). Due to its special aerodynamic shape ( monopteros ), the fruit causes autorotation when falling , which causes the seeds to sink more slowly and the wind to distribute the diaspores over a large area .

There is no endosperm in the mature seed . The oil- or starch-containing embryo has an elongated radicle and two flat or folded green cotyledons ( cotyledons ).

Maple through the seasons 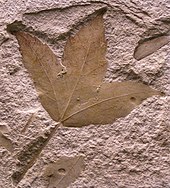 Molecular biological investigations showed that the genus Acer belongs to the subfamily Hippocastanoideae within the family Sapindaceae . It used to be part of the independent horse chestnut family (Hippocastanoiceae).

The genus Acer is widespread in the northern hemisphere in North Africa , Eurasia , Central and North America . Their species thrive in temperate , subtropical and tropical areas, but in the tropics only in the mountains. Many maple species have a Holarctic distribution. A large number of species are native to Asia and North America. 99 species occur in China , 61 of them only there. 13 species occur in Nepal and eight species in Pakistan . 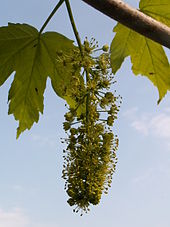 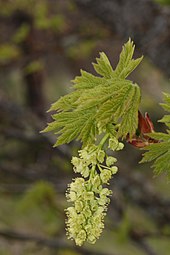 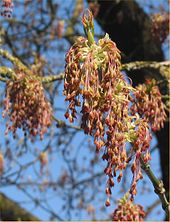 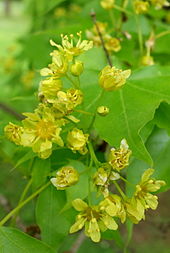 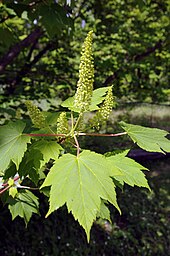 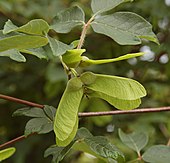 The genus maple ( Acer ) includes 110 to 200 species. The structure of the maple genus ( Acer ) is controversial, for example divided into the following sections (sect.), Some of which are even more finely divided into series (ser.): 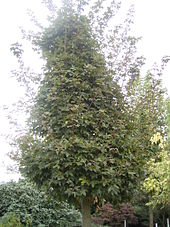 There are some hybrids (selection):

Due to their similar leaf shapes, the maple-leaved plane tree ( Platanus × acerifolia ) , which is often planted as a street tree, is believed to be a maple species; However, in contrast to the maple species, plane tree species always have alternate leaves and often a very characteristic bark.

The wood of the sycamore maple ( Acer pseudoplatanus ) is one of the valuable hardwoods. Yellowish-white to white in color, the annual rings are recognizable, but the sapwood and core are not separated from each other, but are of the same color. The medium-weight, elastic, tough, hard wood only shrinks slightly. The flexural strength is good. The wood is not very weatherproof. The surfaces are easy to work on, easy to polish, stain and color. Treatment with varnishes is also problem-free.

Particularly in the 1950s and in the first half of the 1960s, both plain and figured (flamed maple ) maple veneers were very popular for bedroom furniture, solid for drawers and for small pieces of furniture. It was also often used as a contrasting wood in the form of edges and decorative strips. Due to its tendency to yellow relatively quickly, it was not used for exterior fronts in furniture construction. Today it is still used for the interior lining of high quality furniture. Maple wood is used by cabinet makers to manufacture the finest furniture, and it is also used for inlay work (inlay work). A special type of use of maple are unpainted table tops for pub tables made from solid wood. Parquet made from American hard maple is considered to be particularly valuable and is characterized by high wear resistance. It is also well suited for building stairs.

Selected sycamore maple has long been used as decorative and resonance wood for the manufacture of musical instruments (string, plucked and wind instruments, drum kettles). Back, sides and necks made of maple are the norm for classical string instruments . Especially popular here's maple in veneered parts and birdseye maple . Turners, carvers and sculptors like to use maple wood for their work, as fine details can be worked out here. The fine-pored wood is also used for sports, play and kitchen equipment. Strong branches and crooked trunks are used as industrial wood in the chipboard industry or are in great demand as firewood.

The maple seedlings that sprout around the plant in the ground foliage from mid-February to early April are collected before they become seedlings and are suitable for raw consumption. The fresh sprouts have a tart, strong taste and are rich in ingredients. It must be noted, however, that maple seedlings of some species contain a toxin with hypoglycine .

Many varieties of different types of maple are used as ornamental plants for gardens, parks and avenues . You can also work the maple as a bonsai . There is a multitude of variegated to spherical varieties.

The disease of animals known as "red maple toxicosis" after eating the withered leaves of the red maple ( Acer rubrum ) is significant from a veterinary perspective .

According to recent findings by the in sycamore seeds and -keimlingen contained hypoglycin a mostly fatal atypical Weidemyopathie triggered the horse. 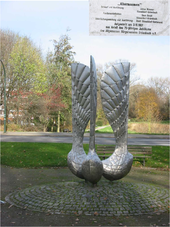 Maple seeds as a work of art

According to popular superstition, the maple offers effective protection against witches. In Western Pomerania, for example, the doors and rooms were decorated with maple, in Mecklenburg the witches were to be kept away from stables by driving maple tenons into the doors and thresholds. The same effect should be achieved if maple branches were pinned to doors and windows on June 24th . This ritual should also protect against lightning strikes. To protect against moles, potato and flax fields were surrounded by maple branches in Revensburg. It is known from Alsace that maple branches on doors should keep bats away from the house.

In folk medicine, the maple leaves picked on June 24th are dried and softened in boiling water. They are considered curative for all wounds.

In Upper Bavaria it was believed that fat maple leaves indicated a good, productive harvest. Furthermore, watering the roots with wine has been handed down - this should make a wish come true.

The sycamore maple of Trun in the canton of Graubünden is famous . Under him on May 16, 1424 the upper or gray covenant was sworn. In 1750 the tree had a total circumference of 16 meters. In 1824 two of the three tribes were still standing. When the almost 500-year-old maple was knocked over by a storm in 1870, a young sycamore maple was planted from a seed of the old one, which is still there today. In 1890, the root of the old tree was ceremoniously transferred to the conference room of the great union and is now in the Sursilvan Museum in Trun . The maple is also often used in place and field names. In Upper Valais, “Agarn” and “Ayer” in the French region correspond to “Ahorn”.

The maple leaf is a symbol of Canada and is used in the Canadian flag since 1965 to represent the country's vast forests. The model probably came from the sugar maple ( Acer saccharum ). In China , the maple is a symbol of office.

Flag of Canada with the maple leaf