This article covers the Chinese area. The asteroid named after him is described under (2539) Ningxia .

Níngxià ( Chinese  寧夏  /  宁夏 ) is an autonomous region in the northwest of the People's Republic of China . The full Chinese name is Níngxià Huízú Zìzhìqū宁夏回族自治区, Ningxia Autonomous Region of the Hui Nationality . 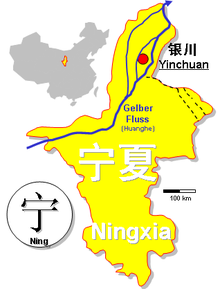 With an area of ​​only 66,000 km² and a population of 5.6 million, Ningxia is one of the smallest and least populous of the provinces and regions of China, but is still more than one and a half times the size of the Netherlands. The area is traversed by the Yellow River, which flows into Ningxia to the west and leaves it to the north. Another important river is the Qingshui He , which, coming from the south in Ningxia, flows into the Yellow River, at its great north bend.

Ningxia is located on the north-western border of the large loess plain , at the transition to the Mongolian steppe and desert country. 38% of the area consists of hill country, 27% of alluvial plains and basins, 17% of plateau lands, 16% of mountains and 2% of deserts. The alluvial plains and basins traversed by the Yellow River form the most important agricultural areas, which, however, are increasingly losing their fertility due to intensive and incorrect use.

In the south and southwest, Ningxia is enclosed by the Liupan Shan Mountains and the Quwu Shan Mountains . In the north, where the remains of the Great Wall separate Ningxia from Inner Mongolia , lies the Helan Shan . The highest point in Ningxia is 3556 m.

In the Ningxia region, the miniature landscape in Huangyangtan was found by Google Earth . The purpose of this installation is still unclear.

The climate of Ningxia is continental temperate with precipitation decreasing strongly from south to north. While in the south 670 mm of precipitation falls per year, in the north it is often well below 200 mm. This northern part of Ningxia belongs to the Central Asian steppe and desert area . The capital Yinchuan has about 200 mm of precipitation annually, which falls mainly in summer. The average January temperature of Yinchuan is around −9 ° C, the average July temperature around 26 ° C, although the maximum summer temperatures can exceed 40 ° C. Although the name Ningxia translated means more or less calm summer , more frequent strong winds are characteristic of the region's weather.

The Ningxia Autonomous Region is made up of five prefecture-level cities . They are:

Tombs of the Xixia

The history of Ningxia is determined by two characteristics of its geographic location:

The region played an important role from the 10th century . After the collapse of the Tang Dynasty through revolts from within and attacks on its borders, the north-west of the empire was particularly exposed to invaders from Central Asia. In the 10th century, the Tanguts , a people close to the Tibetans , established a strong state in what is now Ningxia. In 1038 the ruler of this state, Li Yuanhao, gave his empire the dynasty name Xia, which in today's Chinese historiography is known as Western Xia or Xixia. Attempts by the Xia to conquer the rest of China were repulsed in 1044 , but the western Xia remained a powerful force in what is now Gansu and Shaanxi , fighting with the Song from the south and the Liao from the northeast for supremacy over China . The capital of the then empire, whose state religion was Buddhism , was near today's Yinchuan and was called Xingchuan.

Around the year 1215 the western Xia got a new rival in the north when the Mongols united under Genghis Khan . A short-lived alliance with the Mongols made it possible to carry out attacks against the Song and Liao. In order to subdue the western Xia, Genghis Khan undertook six campaigns, in which he himself was fatally wounded by poisoned arrows of the Xia in 1227 near what is now Guyuan . Shortly before his death, Genghis Khan ordered that the western Xia dynasty be destroyed. Since then, the region of today's Ningxia was no longer the center of an imperial dynasty.

After the unification of China under the Mongols, large numbers of settlers came from Central Asia, increasing the presence of Islam in the region. These Muslims adopted the dominant Han Chinese culture and language, but retained their religion. It was not until the 19th century , when large parts of China were in revolt against the rule of the Qing dynasty , that there were rebellions among the Muslims. During the great rebellion between 1862 and 1878, large parts of Ningxia, but also the neighboring provinces of Gansu and Shaanxi, were devastated. Numerous Muslims were killed in the bloody suppression of the rebellion.

Flag of the "Sultanate" of the Xibei San Ma, which was autonomous until 1949

From 1912 to 1949 the Muslim-Chinese Hui warlords of the Ma clique (Xibei San Ma), allied with the Guominjun and then with the Kuomintang , ruled from Ningxia via Gansu to Qinghai . In 1928, Ningxia Province was established for the first time, at that time by splitting off from Gansu, which in turn had emerged from Shengan shortly before . At that time it included not only the area that is now known as Ningxia, but also large areas north of it, which today belong to Inner Mongolia , but which consist only of uninhabited desert.

After the communists gained control of the region in 1948, Ningxia and its neighboring provinces were placed under the administration of the Northwest Administration until 1954. In 1954 , Ningxia was dissolved and incorporated into Gansu Province . But as early as 1958 , Ningxia was re-established as an autonomous area for the Muslim Hui nationality. The same year the railway line between Baotou in Inner Mongolia and Lanzhou in Gansu was completed.

The November 2000 census showed a population of 5.62 million, compared to 5.9 million at the end of 2006. This means a relatively low population density of around 85 people per square kilometer. Since there are no restrictions on people moving into the region, the population grew by around a fifth between 1990 and 2000. Although the region was established for the Hui Chinese , the majority of the population is Han Chinese . The remainder, around 35 percent, are Chinese Muslims descended from traders who came to the region via the Silk Road or Han Chinese who have converted to Islam. Later, in the 14th and 15th centuries, this part of the population was increased by settlers from Central Asia . Thus, not only Islam , but also Daoism and Buddhism , have a very long tradition in this region.

By the end of the 19th century, Hui and other Muslim peoples in Gansu Province (to which the Ningxia area belonged until 1958) made up over 90% of the then population (8.35 million of 9.3 million).

The 2000 population census also found that around 32 percent of the population lived in cities. The most important city is Yinchuan , which is located in the north of the region between the Yellow River and the Helan Shan Mountains . With 1.38 million it is the largest city and also the capital of the region. Other important cities in the north are Shizuishan (with the municipal government in Dawuko) and Wuzhong. In the south there is only one major city, namely Guyuan.

In 2000, 17% of GDP was generated in the primary sector (1994: 22%), with this sector employing 58% of the workforce. Above all, cereals ( maize , wheat , rice ) and vegetables (especially legumes ) are grown, although all agriculture requires irrigation. A third of the agricultural yield is generated with livestock, with sheep, goats, pigs and cattle being dominated. With 80.8 head of cattle per km², Ningxia has the highest cattle density of all provinces and autonomous regions in China; the consequences are overgrazing and desertification .

Special features of agriculture are the wool and skin of wild Argali sheep , facai (a moss that is eaten as a vegetable), liquorice roots and goji berries ( Lycium barbarum ), the consumption of the latter being for the remarkably old age, the reaching some of the residents of Ningxia is blamed.

The secondary sector generates 45% (2000, 1994: 42%) of GDP. The construction industry is significant, with sales alone accounting for 10% of total GDP, which is a consequence of the high investments made by the central government in western China's infrastructure. Ningxia has large coal deposits of good quality, and other important mineral resources are petroleum , gypsum , lime , iron ore and Helan stone (a special type of clay). 84% of the value of industrial production comes from heavy industry. The industry (metal industry, chemical industry, mechanical engineering) is almost exclusively concentrated in the Yinchuan and Shizuishan locations in the north of the autonomous region.

About 38% of economic output comes from the tertiary sector (1994: 36%), the majority from trade and transport. Tourism plays a very subordinate role; no province in the People's Republic has lower income from tourism than Ningxia.

If one takes into account that Ningxia was one of the most remote regions in the first half of the 20th century, one sees great progress in the development of the infrastructure. In 2000 there were almost 10,000 km of roads, of which about 100 km were motorways. There are also over 700 km of railways and 400 km of navigable waterways. Ningxia claims to be the only region in northwest China where all villages are connected to the electricity grid.

The illiteracy rate in 2000 is given as 13.4%, which is a relatively high value within China. Despite the agricultural character of this region, however, it has declined noticeably compared to 1990.

Hui autonomy in the People's Republic of China