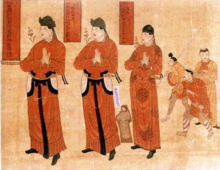 The Tanguts ( Chinese  党 項  /  党 项 , Pinyin Dǎngxiàng ) are a historical Sinitic people in the area of ​​today's Chinese provinces Inner Mongolia , Qinghai Sichuan and Gansu as well as the autonomous region of Ningxia . In 1038 they founded the Western Xia Dynasty ( Xi Xia or Xixia ). Their descendants may be the Qiang in what is now southwestern China.

The Tanguts are first mentioned at the beginning of the Tang Dynasty . They lived as cattle herders on a foothill of the Qinghai-Tibet plateau in the Sungqu region . In the middle of the Tang period, a large part of the Tanguts were resettled in the Qingyang area (Gansu province). The remaining Tanguts were called "Miyao" ( Chinese 弭 藥 , Pinyin Mǐyào ) by the Tibetans , to whom they were henceforth subordinate . The eight Tangut tribes who migrated north were resettled again under Tang Daizong , this time to the area north of Mizhi and east of Hengshan in Shaanxi Province . Many also moved to the Suide and Yan'an areas .

The Empire of the Western Xia, at its greatest extent in 1150

Tuoba Sigong, who was descended from the Tabgatsch and was given the family name “Li” (李) due to his merits from the Tang Dynasty, achieved greater independence for the Tanguts in Jingbian . The Tangut rulers and the Western Xia Dynasty go back to him. The Tangut Empire began to expand in 995, and the Uighur Empire in Gansu was conquered in 1036 . In 1038, the Western Xia Dynasty was proclaimed a separate state.

Genghis Khan conquered the Tangut Empire in 1209. Since they did not fulfill their duties, he undertook a new campaign against the Tanguts in 1226, which ended with the complete destruction of their capital. After the destruction by the Mongols , some of the surviving Tanguts moved south and united with the Miyao who had remained in Sichuan. Nevertheless, the Tanguts disappeared as an ethnic group. Their descendants are mainly to be found among Tibetans, Han Chinese and Qiang . 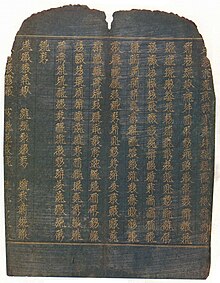 The extinct Tangut language belonged to the group of Xixia Qiang languages , a small subunit of Sinotibetan . The Qiang , whose language is still spoken, are an ethnic minority who mainly live in Sichuan . The Tanguts developed their own script for their language, the Xixia script .