The title of this article is ambiguous. Further meanings are listed under Yan'an (disambiguation) .

Yan'an lies on the Loess Plateau, its relief sloping from the northwest to the southeast. The urban area is at an altitude of 960 meters, the area administered by Yan'an is between 388 meters and 1809 meters above sea level. The climate is continental and dry with large temperature differences between winter and summer and day and night. The annual average temperature is between 7.7 ° C and 10.6 ° C with 170 frost-free days per year. Yan'an receives between 490 and 660 millimeters of precipitation per year, but 2300 to 2700 hours of sunshine per year. 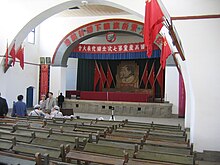 The conference hall can be rented by tourists

Yan'an was the target of the Long March in 1935 and then until 1948 the political and military base of the Chinese Communist Party . In addition, until 1945, Yan'an was also an important base for Korean communists in exile, who moved from here to North Korea after the end of World War II , where a communist regime was installed by the Soviets . The headquarters of the communist leadership is on the list of monuments of the People's Republic of China .

At the county level, Yan'an is made up of two boroughs, one city and ten counties. These are:

The seat of the Yan'an government is located in Baota District.

The Ten Thousand Buddha Cave and the Tied Pagoda on Qingliangshan from the time of the Song , Yuan and Ming dynasties are located in the Baota district and are on the list of monuments of the People's Republic of China .