The title of this article is ambiguous. Further meanings are listed under Allee (disambiguation) .

Alleys are streets or paths that are bordered on both sides by uniform rows of trees or separated in the middle by a row of trees. The trees on both sides of the path are planted according to plan at the same intervals and at the same age with approximately the same planting quality. Usually trees of one tree species are used. In the narrower and original sense, the avenue is a tree-lined, architectural garden path axis of a stately palace complex that extends out into the landscape . A half-avenue is a special form of avenue in which there is a row of trees on only one side of the road or path.

The word Allee comes from French and was naturalized in Germany during the Thirty Years War . “Allée” (from French aller = to go) was originally a (shady) walkway in an architectural garden. Only the expansion of the large aristocratic palace gardens into the landscape and the creation of landscape gardens through axial tree-lined paths led to the current meaning of the word avenue.

In some German-language street names , the word avenue sometimes appears without reference to any trees. In the English language , the avenue cannot always be equated with the German term of an avenue. The French term allée and the English alley are nowadays understood as an avenue of trees in a forest or city park. Originally the allée served as a corridor or an intermediate corridor between blocks of flats (see “Rademachergang” in Hamburg, “Mårten Potsigs Gränd” in Stockholm, “Moss Side Alley” in Manchester). Avenue comes from the French language and actually means a broadly drivable access road (from Latin : advenire = to come, cf. fortified dam street in German), at that time as the arrival street to a city gate (cf. “Lübeckertordamm” in Hamburg, “Avenue de la Porte de Montreuil ”in Paris). With the removal of the city fortifications in the 16th century, the "French" avenue was extended into the city center and declared a main street. This was connected either as a radial road to a roundabout or as a cross road to a boulevard and was given the characteristics of an avenue of trees. This new type of pervasive road system, which directly connects the distant provincial country with the interior of the capital (see national roads in France), spread throughout Europe. In Germany, Hamburg is one of the few cities in which a large variety and distribution of street type names has been preserved to the present day and has not been renamed.

In the 15th and 16th centuries, avenues were increasingly used to design open spaces and to emphasize planar axes. Although there were already various (often not very regular) planted, tree-lined roadsides, especially in rural areas, before the Renaissance , the focus here was not on the architecture, but on the use of the trees. In the ancient high cultures of the Egyptian empires, as well as Roman and Greek antiquity , avenues were occasionally used as a design element, but played a subordinate role.

In the Baroque - at the time of French absolutism - was the height of the deployment and use of avenues. The famous garden architect André Le Nôtre used this design element when laying out the gardens of Versailles and Vaux-le-Vicomte . The strictly geometrical rows of trees along the path axes served to support the perspective and actual control of the space.

Alleys as a design element in urban planning

History of origin and use

Four different types of avenues can be distinguished according to the origin of their creation and their history of use:

Alleys offer many advantages. In this way, they protect against sun or wind and thus also against humus removal in agriculture. They improve orientation in fog and dusk and make it easier to estimate distances. The roots of the avenue trees strengthen the roadways and protect the paths from erosion and silting. In winter , the course of the road can be seen from the avenue trees , the trees also protect against drifts. Roots and treetops also clean the groundwater and filter particulate matter and other pollutants from the air. The dense tree population in avenues is ultimately also a natural sound insulation.

Often, additional biotopes are created in avenues , which in turn increase biodiversity and in which agricultural pests are controlled naturally , primarily by tree-dwelling, insect-eating birds - but sometimes also by birds of prey .

The trees along the avenues sometimes serve as timber and often bear edible fruits, from which must can be pressed, linden blossoms, acorns or leafy branches are fodder for the animals in the area. In Württemberg, the sovereign laid out avenues with fruit trees in the villages.

However, there can also be disadvantages in avenue streets. In the event of a storm or snow break , there is a danger from falling branches or falling trees . The risk of property damage , injuries or fatal traffic accidents is increased. Roots from surrounding trees can result in an uneven road surface or the cost of removing it. The rapid change between bright sunlight and shade in an avenue during the day often obstructs the view in traffic here.

Due to increased traffic flow, stuck leaves on the asphalt and, above all, sudden onset of rain, leaf fall can lead to an extremely slippery road surface, similar to slippery snow or ice, and therefore carries a high risk in road traffic. Falling fruits as well as fruits on the ground endanger traffic if they hit the windshield at high speed or cause two-wheelers to slide.

Napoléon Bonaparte had avenues laid out across Europe on a grand scale - primarily to ensure sun protection for his marching soldiers.

Alleys represent important structural elements in the landscape and distinctive places in gardens, parks and urban spaces. Alleys form visual channels and orientation lines in the landscape and shape the landscape . As a cultural landscape selement, avenues have a separating and connecting effect. For example, they separate arable fields from meadows or upper and lower slopes and windward from lee. Alleys can connect settlements, land use types and landscape areas with one another.

Alleys are subdivided into rows or avenues of fruit trees and avenues of deciduous trees (no fruit trees) depending on the tree species selected.

For the production of must, roads and paths accompanying fruit trees were of great importance in Germany. Dessert fruit trees played a minor role as avenue trees. The oldest fruit trees are plum ( Prunus domestica ) and bird cherry (Prunus avium) , which were planted in Germany from the 15th century. Apple and pear varieties later supplemented the rows of fruit trees. 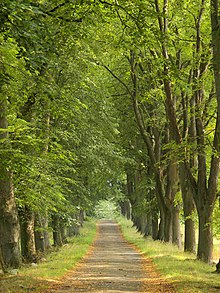 Typical avenue trees of historic palace avenues in Central Europe are linden trees , depending on the landscape primarily winter linden ( Tilia cordata ) or summer linden ( Tilia platyphyllos ), and red beech ( Fagus sylvatica ), often in their cultivated form of copper beech . The linden is the most popular avenue tree in Germany. So it is not surprising that representatives of the church and the nobility planted linden alleys in their estates between the 17th and mid-19th centuries. Today these avenues of lime trees are 100 to 300 years old and have a trunk circumference of up to 4 meters. In the rural areas of Central Europe, oak avenues , mainly English oaks ( Quercus robur ), were often planted alongside cider fruit avenues . Today, pedunculate oak avenues are among the oldest existing avenues in Germany. Pedunculate oak trees can live up to 1000 years. In the inner-city area, the maple-leaved plane tree ( Platanus x acerifolia ), the common horse chestnut ( Aesculus hippocastanum ) and, increasingly, the red horse chestnut ( Aesculus × carnea ) are popular. At the end of the 16th century the horse chestnut was introduced to Europe as an avenue tree from Asia Minor. In the Ottoman Empire, the fruit served as food for the horses of the Ottoman army. The chestnut is considered to be the most popular avenue tree species in Europe and at times also in Germany. In the period between the 17th and 18th centuries, the horse chestnut was used as an avenue tree by many noble houses and church houses. Fast-growing avenue trees are poplars , especially pyramid poplars ( Populus nigra 'Italica'). In addition, are mining and Norway maple ( Acer pseudoplatanus and platanoides ) to oak and lime avenues, the third most important avenue tree species in Germany.

Germany has about 23,000 kilometers of avenues.

Brandenburg is the state with the largest number of avenues. Around half of the German avenues are in Brandenburg. The landscape of the extensive Brandenburg forest and lake areas is characterized by avenues. The 8,600-kilometer federal and state highways existed outside built-up areas over a distance of 2,344 kilometers with avenues.

In Bavaria there are avenues with almost 1,150 kilometers of road. The Free State has the third largest stock of avenues in Germany. There are alleys here in the vicinity of larger cities and in connection with historical palace and gardens. In addition, you can see avenues on old roads and fruit tree avenues on old field paths in rural areas.

Alleys as the subject of painting

The discovery of perspective in painting meant that avenues were increasingly used as a design tool in garden art. Because of the interesting play of light and shadow, avenues are popular motifs in landscape painting . The genre of the tree-lined roadside was taken up by numerous artists.

The impressionist Ernst Oppler , for example, depicted a beach promenade made of plane trees.

The important representative of Viennese Art Nouveau , Gustav Klimt , dealt with the subject in the work Allee vor Schloss Kammer .

Alleys are a valuable cultural landscape element, a testimony to cultural history, and at the same time they shape the landscape and the townscape in an unmistakable way. A large number of avenues have been felled as part of road construction work in recent decades. Some of the avenues are very old. The traffic safety measures, the use of de-icing salt and the consequences of climate change (summer drought) , which are required by law, damage the vitality of the existing trees. Planting new avenues outside built-up areas along country roads is no longer regular. Current guidelines and recommendations for the protection of accidents with impacts on trees (ESAB) lead to an increase in the lateral distance between the tree planting and the edge of the road, with the result that the avenue loses its specific character as an accompanying element to path connections or the planting is completely dispensed with, because the corresponding room is not available.

In the 1960s, the ADAC carried out a campaign against avenues in the old federal states : a car colliding with an avenue tree was too often fatal for the occupants; Human lives have priority over aesthetics and nature conservation . Also in the new federal states, mainly in Saxony , avenue trees were sacrificed on long-distance roads in favor of safety and the faster and denser car traffic. Brandenburg and Mecklenburg-Western Pomerania were largely able to keep their old trees on the streets. The standards changed later: Since the reunification of Germany , the ADAC has also been one of the associations that campaigns for the preservation of the splendid old avenues in East Germany and the extension of Deutsche Alleenstrasse .

According to estimates, around 50,000 kilometers of avenues have been lost in Germany so far. The German Federal Environment Foundation is currently running a project to precisely record all avenues in Germany. From 2005 to 2020, a further 4475 kilometers of avenues were lost to deforestation in Brandenburg alone. Due to traffic safety, guidelines have been issued in Germany that make it difficult to maintain and replant trees. When trees are replanted in existing avenues, a tree must be 4.50 meters from the roadway and when new avenues are laid out, it must be 7.50 meters. The authorities shy away from this effort, in 2017 and 2018 alone 16,000 trees disappeared in Saxony and only 1,400 were replanted.